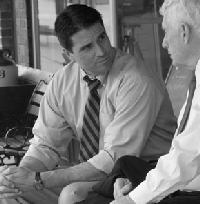 The Washington Post's Shailagh Murray takes a look at the parade of attractive candidates the Democrats have fielded in this year's congressional races and 8th District candidate Brad Ellsworth makes the runway. Murray writes:

The research is unambiguous that Ferrin is right: Attractive oliticians have an edge over not-so-attractive ones. The phenomenon is resonating especially this year. By a combination of luck and design, Democrats seem to be fielding an uncommonly high number of uncommonly good-looking candidates.

The beauty gap between the parties, some on Capitol Hill muse, could even be a factor in who controls Congress after Election Day.

Democratic operatives do not publicly say that they went out of their way this year to recruit candidates with a high hotness quotient. Privately, however, they acknowledge that, as they focused on finding the most dynamic politicians to challenge vulnerable Republicans, it did not escape their notice that some of the most attractive prospects were indeed often quite attractive.

There is a certain logic to the trend. Back in 1994, when Republicans seized power in Congress from Democrats, the GOP had a number of fresh-faced challengers who knocked off incumbents who had grown worse for wear after years of committee hearings and fundraising receptions. This year, it is the Democrats who have several ripe opportunities to unseat Republicans, some of whom have grown gray and portly
during their years in power . . .

The list is decidedly unscientific, but it includes several whose names come up often on Capitol Hill for reasons other than their policy platforms. Among those on it . . . are Brad Ellsworth, a swaggering Indiana sheriff . . .

Good looks obviously has its advantages as a candidate. A look at Indiana politicians, however, makes it clear that the Brad Ellsworths and the Evan Bayhs have nothing on the average-looking Joes. Mitch Daniels, Pat Bauer, Mark Souder or even Julia Carson haven't been stopped by less than good looks. If looks mattered all that much, state representative candidate Jon Elrod (R) in Indianapolis' District 97 would win hands down over his Democratic opponent Rep. Ed Mahern (D). Good looks notwithstanding, my gut instinct tells me Mahern will win re-election easily. And Rep. John Hostettler might well lose to Ellsworth this year, but I think it will have more to do with the voter's concerns about the issues in the campaign than whether Ellsworth is a better looking man than Hostettler.
Posted by Gary R. Welsh at 10:33 AM

Jon Elrod is adorable, and he's running in my district. I've seen out and about, but he seems kind of shy for a candidate. I would offer to introduce him to some of my friends at the gay bars, but I don't think he would accept my offer. He seems a little too conservative for the district.

checkout the cute, cute, cute vet, John Laesch, running against fugly Denny Hastert at www.john06.com/pictures -- . I've even sent him a few bucks to bedevil the Speaker in his home base...

Among Republican politicians, Jon Elrod joined Carl Brizzi, Donna Edgar, and Scott Keller in attending the Lambda dinner this year, (a dinner which also drew Sydney Taurel of Eli Lilly as perhaps the most high profile business leaders in attendance.) I don't think Elrod could be classified as among the social conservatives.

Thanks for pointing that out Chris. I didn't see Jon at the Lambda Dinner. I've seen him around a lot, but I had no idea he was a candidate for office until I saw him at the League of Women voters candidate's forum which aired on WCTY the other day. He is an attorney like me. People assume all attorneys in this town know each other, but I meet attorneys all the time who've been around for years and I've never run into them.

Well, hate to observe this, but...

In Indy, I'd love to see ANY coverage of the campaigns this fall...including a fluff piece about good-looking candidates.

Can someone break Matt away from his newest computer game, to let him, know, all he has to do is pick out the cutest candidate. Write about it. Write about your pulse. Hell write about anything.

Including a state rep's children's book.

Appearance may have more of an effect for first-time candidates to an office than for incumbents, perhaps. There's a picture of Julia Carson in one of my Indianapolis history books from 1977 -- she was quite pretty.

Julia used to really dress to the nines and take extra care on her personal appearnace.

Emphasis on used to...

Still, I'd rahter my elected officials did the job than looked great.

In the 1976 Democratic primary, Julia Carson's opponent was incumbent Senator Marie Lauck who had a battle-axe aura about her. That Senate District was safely Democratic so the primary was where the battle was ... it made Ms. Carson Indiana's first African-American woman in the Senate!

I met Jon Elrod last month - I dont recall him as anywhere remotely close to a "hottie" ... I was surprised his name even came up during a discussion of looks.

A good-looking Mahern (he got his looks from his mom) will be running against Scott Keller - Maherns are superb on LGBT issues!

So are you saying, Wilson, that the Dems, are going after Keller after he voted for the HRO and the police merger?

Yes, there will be Democratic candidates fielded against all GOP candidates for council. The level of support for each individual race remains to be determined by a variety of factors and players ...

There's a picture of Julia Carson in one of my Indianapolis history books from 1977 -- she was quite pretty.

WAS being the operative term there. Now she's just elderly and senile. Even Glamour Shots can't help that. How's the new wig working out for her Wilson?

well, at least you didnt call her "a dumb bitch" here like you called Jen Wagner on your blog ...

your powers of perception are blinded by your misogyny...

Advance Indiana said...
So are you saying, Wilson, that the Dems, are going after Keller after he voted for the HRO and the police merger?

Not this Dem. we need more Scott Kellers and I will support him all of the way!

Scott did the odd thing for a Republican - he voted the Democratic position on the HRO and the police merger. He actually knocked Karen Horseman off the Council - she was a pioneer in LGBT-friendliness on the council. If she had remained, she would also have voted for the HRO and police-merger. A decent Democratic successor will vote at least as good as Scott Keller, if not better. People arent angry at Keller, many folk think we can do better. People are just so grateful that Keller isnt as gawdawful as the rest of his fellow Republicans !

That district is demographically Democratic leaning --- Horseman had slacked off campaigning but Keller worked it damn hard - he won it by only 3 or 4 votes out of thousands...

Fear not, AI. Thankfully, Wilson knows little or nothing about the inner-workings of the party. And if he did, no one listens to him.

Yes, I had also heard that a younger Mahern would oppose Scott Keller. It's a 53% Dem district. But if this Mahern is any dimmer than Dane, we may have to schedule some remedial classes of some kind.

Scott ought to save himself the trouble and switch parties. His caucus despises him. Well, the wingnuts do, at least...Phil Borst is a nice guy, but he's outnumbered by wingnuts.

Multiple Republicans will be opposed by damned good Dem candidates. I am just hoping that a good Dem steps up to oppose King Ro, Juice, and maybe another one or two who have just overstayed their welcome in our caucus. Or that someone will tell them ahead-of-time to, uh, take a hike. And rumor has it one or two of the good ones, like Mary Moriarty, may not run again. I hope that's not the case...the good ones down there are few and far between.
(Yeah, I know she voted against the HRO. But she's a good councilwoman. And not strident)

Wonder if Ron will be finished with his legal troubles in time?
Ah, what a tormented soul...

With all respect to Karen Horseman and her intents, her pursuit of Domestic Partnership benefits was as premature as the pursuit of marriage, and as unhelpful when pursued out of proper strategic order. Going after nondiscrimination first was always the necessary strategy, but for all their good intents, those who pursued domestic partnership benefites, like those who pursued marriage, generally dismissed the need to pursue nondiscrimination first.

What's more, the tradeoff between Horseman and Keller was not one-for-one. Without having a Republican actively promoting the HRO, and without that Republican diffusing the conservative opportunity to portray it as a partisan "liberal Democratic" initiative, a whole lot of dominoes would not have lined up to get the job done, including corporate, Chamber of Commerce, and media dominoes which would have held back were there not bi-partisan support.

In my opinion, Scott Keller was one of those individuals without whom the measure would not have been pursued successfully all the way through to passage. No matter Karen's good intents, it wouldn't have happened without Scott Keller. Neither Jackie Nytes nor Scott Keller were replaceable in the effort. z

Funny thing about following ‘proper strategic order’ it has nothing to do with the concept that our democracy was designed to be of the people, by the people, for the people. Karen Horseman, and politicians like her, hears the needs of the people and respond, to fault her for doing so is truly bizarre.

For a clearer understanding of the movement that propelled the needs for domestic partnership benefits, pursuit of marriage equality etc. see “How Aids Gave Gays Marriage” http://www.aidschicago.org/community/modules.php?name=CMNews&secid=5&sid=25&printable=1

Hmmmm I wasn't aware Scott Keller was being nominated for sainthood. Nice guy and all, but if we need ot start pulling out votes on issues, well...he's wrong waayyyyyyyyy more thanhe's right.

Fuzzy logic, Chris. You had to make a stab at it, but was wide and TO THE RIGHT.