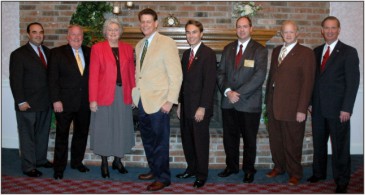 Advance America's Eric Miller continued doing what he does best this week: using a tax-subsidized, nonprofit organization to campaign for his conservative Republican friends. Last night, he took his statewide campaign to get out religious right voters for the Republican Party to Greenwood. If you look at the picture above, you will find two AI favorites, Rep. Woody Burton (R) and Sen. Pat Miller (R) standing next to each other. There's Rep. David Frizzell (R) and Senate Republican candidate Greg "The Flogger" Walker. And I would be remiss if I forgot to mention the guy at the center of the photo, Sen. Brent Waltz (R). Waltz, a single man who inherited a lot of money from a single man, is one of Miller's staunchest proponents of a constitutional amendment to ban gay marriages.
Posted by Gary R. Welsh at 6:42 PM

I attended this event, as a couple of these guys are my representatives (who sure as hell don't represent me). It was like being deep into enemy territory let me tell you.

Of course Miller mentioned the marriage amendment a few times as one of his agenda items, but these days he is very focused on trying to get a Constitutional Amendment to repeal property taxes, and he spent the majority of the time making his case (he even has a rather amateurish video put together).

A side note, has anyone noticed his helpers who pass out his literature and do his other go-fer tasks? They're all cute teenaged boys. Not to suggest anything, just an observation.

Are you hinting Eric Miller might be supporting sodomites in the Indiana General Assembly? Why would a Republican God-fearing family man like Eric Miller do such a thing? Heavens to Betsy! Why, that fairly reeks of hypocrisy if true ...

Relax Jeff - those are just pages for the Lord!

Those are your inferences Wilson, not mine. I simply made a factual observation.

Oh, I don't know the guy so I wasn't suggesting he's gay. There's nothing unusual about an old, single man leaving a fortune to a 19 year old boy he's not related to is there?

Most Republicans are really not homophobic (not counting the Waterman's, Drozda's, Pat Miller's et. al.), at least not in private. I don't know Briain Bosma personally, but I wouldn't be a bit surprised if he's a non-homophobe.

But sucking up to the religious right has put them in the untenable position of having to beat up on us legislatively in order to appease the fundies, while privately trying to convince colleagues, co-workers, and GLBT lobbyists that they're not REALLY anti-gay.

Perhaps an electoral spanking will convince them that the far-right and people like Miller is the "base" that's dragging them down. I'm hoping for both (the spanking and the wake-up call).

The usual convening of the Gang of Eleven to collect praises from the faithful masses.

Pat Miller's presence mirrors her involvement in the Methodist Church. She is national head of some straight-laced group that wants to pull charters from churches that allow gay pastors, etc. This, in the second-largest protestant denomination in America. And lest you think this nonsense is harmless, she laid low for five years, over two separate national Methodist conclaves, to pack one of the committees with her faithful. And now they have a majority. Seriously. She's dangerous. My pastor says he prays for her daily, for enlightenment. I pray for something to keep her in Warren Township. How about a group trip to Lowe's, to buy lumber to nail her into her house?

Jeff Newman for President! Gutsy guy, Daniel in the lion's den...you only get this kind of news on blogs.

(How long can this Waltz whispering go on, without him getting barnicles with this group? They're not exactly, un, tolerant.)