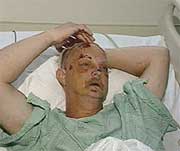 Darrell Arthur is a GLBT activist who helped start the Damien Center, which provides health and consulting services for people suffering from HIV/AIDS. Last Friday, his life nearly came to an end when he was riding his bicycle on the City's popular Monon Trail on the near northside. Arthur was brutally beaten, robbed and left for dead in a pile of rubble near the trail. WTHR-TV's Linsey Davis reports:

His head is stapled closed. His face still shows the wounds that left it bloodied and bruised. His heart along with several bones are broken.

But it was Darrell Arthur who, despite his wounds, was feeling sorry for his attackers. He spoke from his hospital bed. "I feel sorry for people who do things like this. I mean I help everybody who I possibly can."

In the name of help, Arthur took the time to give a hand to a little boy having bike trouble on the Monon Friday night. He then cut grass for a friend of his. On his way back home, the help that Darrell is known for giving he so desperately needed himself.

"I kept saying to myself 'I'll be home in ten minutes' and then, at that point, I don't remember what happened."

Darrell says the last thing he remembers is riding his bike along a stretch of the Monon near 33rd Street and Sutherland Avenue, but then his ride abruptly stopped. Police say he was then beaten, robbed and left for dead.

He continued his story. "Apparently they tried to hide me so the Police Department wouldn't find me. There were baskets and buckets and an oil stained cloth and I was down underneath all the stuff."

No more space remains along the window sill in Darrell's hospital room. It's now crowded with flowers from some of the people Darrell's helped. The attached cards come from both from the Damien Center, which he helped to start, and Lawrence Central, where he worked in the Special Ed department. Now it's Darrell who's asking for help.

Darrell is now in fair condition at Methodist Hospital. Fortunately, someone passing by saw him alongside the trail and called for help. Yet, at this time, no witnesses to the attack have come forward. If you have any information about this case, call Crimestoppers at 262-TIPS.

This is a shocking story. I've rode my bike on the Monon Trail from downtown to Broad Ripple on numerous occasions. At no time have I feared for my personal safety. It is curious that Arthur's beating took place a week ago and is only just now being reported in the press. Is the City deliberately down-playing crimes on the popular trail? Was it a hate crime?
Posted by Gary R. Welsh at 7:32 AM

Gary, there was a story on WISH early in the week, but that doesn't discount your points. I often ride the Monon also and am a bit frightened now. I'm sure Ted F. will give the story a good deal of attention.

Darrell is a long-time resident of Herron-Morton Place neighborhood, (my old hood) where he has a reputation of being incredibly benevolent and helpful to his neighbors whenever they needed a hand. Darrell's attack has been a flurry of discussion on the neighborhood email list, and they're organizing a response team to help out Darrell and his mother, who is just out of the hospital herself.

I'll see if I can get a contact for who's doing that, so people can help if they want.

There has also been some question about the police report -- apparently there wasn't one filed after the police run and it was done much later, after Darrell's mother started calling to ask for more information. There was some discussion of that on the list as well, and concern over the issue, as well as over why the incident didn't make the news until long after it happened.

I believe it was someone from HMP who got the story on WISH after calling around.

I'll pull some more info from the emails...

I know just what this area needs. A bar, in the Julia Carson center! That part of the city is rising in crime, I don't care what people say.

Do I understand the story correctly that he was apparently beaten so severely that he lost his memory of the attack?

Anyway, how horrible. In a way, random violence is the worst of all.

Well, everyone ought to give it a good deal of attention.

Does the hate crime angle even come up? Or do they think it was simmple stupid random violence?

Unless you knew who he was - how can it be a hate crime ?

And until you find the attacker you can't know ?

Steph, That is concerning about the police report. It's almost as if the city is deliberately suppressing information about crimes that take place where lots of people frequent, such as the Monon Trail and the downtown area.

Doug, It is my understanding he was knocked unconscious early in the attack.

I'm sure the city is hiding crime stats for the Monon. Just ask around Broad Ripple. People are mugged and hit on the trail all the time and it all gets shoved under the carpet.

You may never know the answer to the question of whether it was a hate crime. You have to ask the question though, given the victim. If the only motive was to rob him, why was he beaten so badly and then buried under a pile of rubble so noone would find him? It does set it apart from other crimes which have been reported on the trail.

Nobody deserves that - gay straight or otherwise. Just like the two who were brutally attacked by Julia Carson's grandson didn't deserve what they were subjected to.

Hopes he has a speedy recovery.

The HMP resident who is coordinating help for Darrell is Joe Pendleton -- I'm hesitant to give his email address with out his permission, but I know you can contact him through his pastor, Sharon Baker, from Lockerbie Central United Methodist Church. If you contact the church, I'm sure they'll help direct you.

Regarding the police report, here's information from emails about the concerns:

According to his mother, when she went to the North District seeking information, no police report of the assault could be found.

No mention of the assault was made the news.

His family pursued more information from the police today regarding any reports or documentation of the assault. As North District was closed today, they did the next best thing they could. They met with a officer on the street who attempted to pull up what he could on the terminal in his car. He could find no documentation of a run to the 3200 block area of the Monon trail.

The family plans to work with the ambulance records and attempt to file a report themselves this coming week.

She stated that she was finally able to get a copy of the police report. According to her, she was told that the reason that it was not able to be located was that it was not filed by a number, (?) but rather by the name "John Doe." When they discovered his name, it was later changed to Darrell Arthur.

(Name Redacted)'s account of why there was no police report was somewhat different. In his attempt to find the report, he was told that no report was recorded as there was no one who could provide witness or information to what had occurred. Darrell was in no shape to tell them anything.

I'm just speculating here, but my guess is -- given that part of the trail -- that it was just a plain old simple mugging. That part of the trail gets lonely in the evening and it runs right through the middle of some of the most crime ridden neighborhoods right now. I'd guess a guy who seemed comfortable, had a nice bike, and gear was an easy target.

It makes me incredibly concerned to use that part of the trail.