Carson Refuses To Take Position On Bar In The Government Center 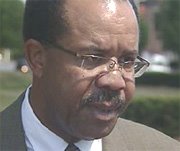 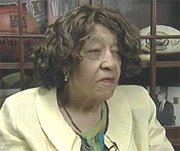 Star columnist Matt Tully separately interviewed both Rep. Julia Carson (D) and her Republican challenger Eric Dickerson for "Political Insiders", which will air on WTHR-TV Sunday morning at 7:30 a.m. Tully writes on his blog today, "Carson declined to take a position on the proposed bar in the Julia Carson Government Center, though she did seem to criticize bar backers for not properly following various procedures (permits, etc.). In reference to her health and Dickerson's call for younger leadership, Tully says Carson pointed out that Lugar is older than she is. True, but how many days of work has he missed during his 30 years in the Senate due to health problems?

Tully remains fixated on how much money Dickerson has raised for his bid against Carson and whether he has the support of the Republican Party. He writes, "Dickerson said he has declined support from the Marion County Republican Party, because he doesn't need it. "He acknowledged he will not reach his initial goal of raising $200,000, but said he doesn't need that much money."

WTHR-TV ran exerpts of the interview during its mid-day broadcast, which Kevin Rader conducted along with Tully. Dickerson says that he is running because a "congressional seat is a terrible thing to waste." He observed that Carson lacked leadership, respect and the ability to get things done for the 7th District voters. Carson was shown defending herself by draping herself around Sen. Lugar. She initially referred to him as a former "Mayor of Indiana" before correcting herself.
Posted by Gary R. Welsh at 11:31 AM

Eric Dickerson has a farm [his word] up in Sheridan in the part covered by the 4th District. That's Steve Buyers who has a worse attendance record in this 109th Congress than Julia Carson. Why isn't Republican E.D. hollering about Republican Buyer's attendance?

Hmm no position. Go figure. She hasn't stood for anything that didn't fit the far left wingnut agenda for a long time.

Truth is likely she is supporting her Ghetto Mafia subordinates and doesn't want to take the political heat.

Well as for Dickerson's response to money from the GOP, Tully reported part of what Eric said. As usual the Star reports what it wants us to hear instead of what was really said. But overall Tully did good, to bad that he didn't report that Carl Drummer drove Carson to the taping. If Tully really wanted to get to the bottom of the bar issue he had Carson and Drummer in the same room, what better time. Bottom line, Carson is in favor of the bar and is afraid that any comment on it will lose her votes. Why is Drummer acting as a driver for Carson anyway? Isn't he the Trustee for Center Township? Who is helping the needy while he pals aroung with Carson on city time?

Wilson, Dickerson may have an opinion on Buyers, have you asked him? You seem to be talking to him alot.

Be cause you have repeated it enough times he does not have to !

Does that then make her the 2nd worst attendence for Indiana congress members ? It looks like both of them were in the bottom 50 in attendence - not much to crow about.

ummm...as an elected official, Trustee Carl Drummer's time is accountable solely to the voters of Center Township, not to some timeclock in City Hall. There is a trained professional staff to handle poor relief and other township matters...

You're right Wilson, Steve Buyer's (R)attendance record is worse than Julia Carson's(D)and yet no response has been offered. Which leads me to suspect that the Dickerson camp has resorted to using ageism and/or that good ole 'work-ethic' slur as their wedgehammer of last resort.

Btw, as I googled for info on attendance records I found an interesting article about the GOP's favorite 08 guy, Sen. John McCain. Seems that since 1995 the McCain has missed more than 1 in 10 votes, making him the 2nd highest in missed votes.
http://www.azcentral.com/specials/special39/articles/0902mccain-votes02.html#

Its a good thing that the Marion County Voters are paying for the Trustee staff...if not, Drummer couldn't joy ride with Carson or play with his BAR BUDDIES. Bottom line is Carson knows whats going on with the bar and she supports it with her refusal to comment.

WTHR aired footage during its 6:00 p.m. broadcast of Carson entering the station's studio for today's interview with only Carl Drummer at her side. This is evidence that she remains very close to Drummer and is in a position to influence him.

AI, I originally posted this at 4:30. If simply missed and not being buried … then sorry for the repeat)


The Republican controlled (agenda setting) 109th Congress, “… is set to finish(ed) its tenure with the fewest number of days in session in our lifetimes (60 years), falling well below 100 days this year.”
http://www.aei.org/publications/filter.all,pubID.24945/pub_detail.asp

with crazies around Dickerson threatening me and my camera, perhaps Ms. Carson felt more comfortable having a strong friend like Carl Drummer at her side if the Dickerson coterie was prowling?

Who threatened you Wilson? Let me know, I'll watch your back...what a joke.

Listen to the entire footage about Lugar, Julia's comment was spacey--It made no sense.

Did Carl drive her there in his township-provided Police-equipped Crown Vic with darkened windows? Or one oh his Corvettes, or his big SUV, or one of the myriad other expensive vehicles he's purchased while on the public dole? These folks are getting fat and rich off us. Where does this man Drummer get all his money to buy these expensive things on a trustee's salary?

Julia could've been driven there by the (kinda cute) young guy who drives her a lot of other places...the same one who was pushing her in a wheelchair through airport security about eight weeks ago...

These clowns play with public positions because they'd crash and fail in the private sector lickety split. (Evidence Julia in her short-lived dress shop that crashed.) They're making more money off us than they'd ever make in the business world, because the business world wouldn't put up with their petty bullshit. Like bars without permits and then feigning shock at the public's outcry.

"Of, if they don't want our investment we'll go elsewhere."

OK. Go already. Here's a newsflash Wilson: people resent others using public positions for their own advancement, or their friends' enrichment. They're entitled to a decent salary. That's it. Even many of your Demo friends are disgusted.

Did I get this correct--Wilson is now officially also shilling for Drummer?

I was shilling for Drummer before Drummer was Trustee Drummer. I helped Carl beat Tandy like a drum: 121 to 7. Now you see why she's so bitter...

fwiw, Ms. Carson was an executive at Cummins Diesel for years - she knows firsthand multinationals as well as small business (her dressshop was a too-early downtowner like Lazarus was).

Wilson it appears that Carson and Drummer wouldn't be where they are today if it wasn't for you...what a joke. Pat yourself on the back Wilson and tell us again how you have saved the world by assisting Carson and the other dead beats.