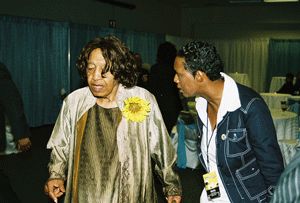 Rep. Julia Carson has been getting noticed lately on Capitol Hill, and it's not in a flattering way. The Hill's "In The Know" column updated us on the latest siting of our representative in Congress:

Rep. Julia Carson (D-Ind.) was spotted on the House Floor and in the Speaker’s Lobby in a gray sweat suit and sneakers last week. Her attire, which is forbidden by House rules, and the fact that the 68-year-old lawmaker is often seen getting physical help from an aide, is causing comment.

But Chad Chitwood, her spokesman, insisted that his boss is not sick. “She’s doing fine, she’s going back and forth [to the district],” Chitwood said Monday. Carson had bypass heart surgery in 1996.

As for concerns about her health, Carson in January told WISH-TV8 in Indianapolis, “I think people thought I was too sick to run. I’m not too sick to do anything.”

Is this how you want your congressperson to be noticed on Capitol Hill?
Posted by Gary R. Welsh at 1:38 AM

What's new? Breaking the rules as usual. Rep. Carson should be retired. Her health is an issue.

The voters do have a choice this election.

This woman has richly earned retirement. She has championed causes of the impoverished and under-represented.

It is time for her to go.

Yes sir - that is how you how to win and influence other congressmen !

Time for a change.

Time for Julia to sit down and take a rest.

Ms. Carson helped break the taboo on "comfortable shoes" in 1997 when she started occasionally wearing running shoes instead of 'fashionable' but uncomfortable ladies shoes. A Congresscritter spends an amazing amount of time simply walking around, rushing to the Floor to vote, from committee meetings, to the office for constituents. Ms. Carson has proudly remarked how some of her female colleagues have also taken up her use of practical footwear like running shoes.

That comfortable gray running suit is one of her favorites - she often travels to DC wearing it. I suspect she simply just arrived in Washington and traveled directly from the airport to the Hill for an important vote or meeting. Unfortunately, a female legislator's clothes still are considered of greater interest than her politics ...

Your quite unflattering photo of her using a walker is from the period right after her big old Roadmaster was totalled (a 'fender-bender' as she coyly called it). Her knee was injured - it still gives her trouble now and then ...

Another representative once admonished her as she was attempting to get on the elevlators for Congress personnel only.

Her appearance is disgusting and she's often mistaken for a baglady on capitol.

Another one that went unnoticed by the Star. Maureen Groppe is a useless D.C. correspondent for the Star.

Stop covering for Julia. The photo was taken at a recent event a few days ago this year. The Hill newspaper did not have a photo in the article.

So much for your defense of her cuurent health condition.

8:57, to be fair, the elevator incident occured many years ago, and she was very well dressed at the time.

However, the Wilson "comfortble shoes" explanation, well...let's jsut say it's a kind way of saying she soemtimes looks slightly askew.

A comb once in a while wouldn't hurt, and has nothing to do with foot comfort.

It isn't sexist to observe that she oft looks the baglady, Wilson. It's real.

8:57, to be fair, the elevator incident occured many years ago, and she was very well dressed at the time.

However, the Wilson "comfortble shoes" explanation, well...let's jsut say it's a kind way of saying she soemtimes looks slightly askew.

A comb once in a while wouldn't hurt, and has nothing to do with foot comfort.

It isn't sexist to observe that she oft looks the baglady, Wilson. It's real.

Lay off the anonymous nonsense, Wilson!

Many of us must remain so, thanks to the henchmen and women sent around if we erred to side against all things Center Township.

Anonymity does not equal lies.

Frankly, on this subject and related ones...quite the opposite...

Unless you are speaking for professional black women in this city, Julia Carson is a public embarassment. She does look like a baglady, always has.

People talk about her appearance all of the time and smile in her Sace. I attended a fund raiser two weeks ago, and even our young women are embarssed to say that she represents them.

If you care so much for her, clean her up, comb her hair and press her clothes before she makes a public appearance. Tell her to leave the booze alone until after the election. She looks drunk all the time.

Some AnonyMice seem to be preoccupied about drinking and drunks. Projection?

In all my years of knowing Ms. Carson, I've never seen her drunk. Yes, she will have a social drink or two but never to the point of being tipsy. It just doesnt happen ... sorry to disappoint the haters here!

My hunch was right about why Ms. Carson arrived on the Hill in her comfortable gray training outfit - I checked with staff and they confirmed it. Her flight to DC ran late and she simply rushed to the Hill in her casual travel clothes. As a legislator for 28 years, she is quite aware of public dress codes for women!

In all my years of knowing Ms. Carson, I've never seen her drunk

That's because you were drunk too and didn't notice.

I'm sure Community Spirits stocks up and does good sales when she's at home.

I am so sorry to see that you have to do all of this work informing the blog public of Julia's deeds all on your own.

Have you aksed for a raise yet ? With all of the work you are doing you seserve it.

If you need any help please let us know.

I'm a Democrat - I do volunteer work with no expectation of getting paid. It's called "social responsibility" - some folk teach Sunday School, others help in hospitals, I try to make the world a little better place by supporting progressive movements and candidates ...

Doesn't that GOP pseudo-monarchist have anything better to do than to hurl dumb insults from far-away Lake County? Is he still on drugs?

I try to make the world a little better place by supporting progressive movements and candidates ...

Doesn't that GOP pseudo-monarchist have anything better to do than to hurl dumb insults from far-away Lake County? Is he still on drugs?

I DO make the world better by supporting moderate to right-wing candidates. Because that's "The Way Things Ought to Be". Progressives have done nothing but ruin society with their welfare state and the whole "Great Society" fraud.

No. My job here is strictly to pick apart everything you say and make you for the fool you really are Wilson. Drugs? Nah. I'm not the one thats all skin and bones and looks like I'm tweaking on meth.

Skin and bones? Moi? Anybody that's ever seen me would laugh at such a description of me. Another proof of winger lies and inanity ... they certainly make fools of themselves!

The rest of us reserve the same right to volunteer for the candidates of our choice. So stop attacking others for their points of view regarding your candidate.

That is what campaigning is all about. We vote in the 7th District to.

Hey Wilson here is a remark from one of “Dickerson’s” cowards, and you can quote me anytime. Only a coward would make an excuse for a bad cause. You do nothing but spread lies and make excuses for Carson.
The next time you put that camera in my face, I just may show you a true coward. Right through your viewfinder. Then I may stick the camera somewhere you’ll never loose it. You would do yourself good to leave the camera home or make sure that you have a good telephoto lens.

btw, of course I did a screen-capture of Dickerson's folk threatening me here online. They're so desperate they want to beat up people -- kinda like 15 years ago, eh?

Who said anything about beating you up?
As usual your small brain imagines something not said or treatened. Kinda like your thinking that Carson's done good for Indiana. Harming you would be like spanking a 5yr old and the results would be the same. One of these days you might grow up and become a man.

You are a non entity in this election. The problem with most of the Carson supporters is they actually believe they are above the law and lack respect for others and the community.

You are a nobody Wilson, running with Julia and doing her snooping and dirty work for her does not make you respectable. Ghost employment is a law violation, Carson allowed you in 13 yrs to be paid as the Clerk while you were out running errands for her campaigns. Say it isn't so.

What will your job be after November 7th?

my job after the election will continue to be poking fun at ignorant and uninformed anonymous cowards ...

(and collecting my retirement checks!)