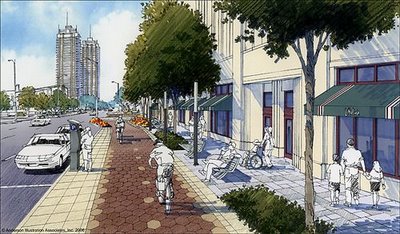 "A Legacy of Gene and Marilyn Glick" is a $15 million gift to the City of Indianapolis to construct the Indianapolis Cultural Trail linking downtown cultural district is greatly appreciated by downtown residents. An artist rendering above shows what the trail might look like along Alabama Street facing north towards Massachusetts Avenue. The Star reports today:

Developers say the 7.5-mile Downtown path, planned and discussed for five years and to be completed in three phases by 2009, will be one of a kind in scope, size and design.

It marks the largest donation ever given by the Glicks, real estate developers who have donated to many cultural and educational initiatives. The gift is believed to be the largest single donation in Indianapolis by a living donor to a cultural endeavor. The Glicks' gift pushes fundraising for the trail to $34 million.

The Glicks' donation could not have come at a better time. Projects like this are no longer possible under the current city administration, which has been slashing budgets for the city's parks, while it hands out ever-greater subsidies to wealthy business owners like the Simons and Jim Irsay. It is so refreshing to see a family that has been blessed give so much back to our community.
Posted by Gary R. Welsh at 7:37 PM

This is a tremendous gift and legacy. We could use more of that spirit in this city.

A huge thank you to all involved. This gift will live on for along time.