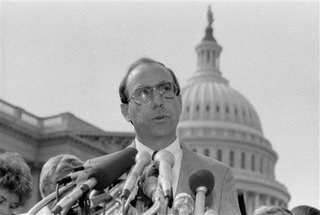 Former Rep. Gerry Studds (D-MA), the first openly gay member of Congress, died today at the age of 69. Studds is most remembered for being censured in 1983 for having sex with a 17-year-old male page. He admitted an error in judgment, but he never apologized for his conduct. He continued to be re-elected by the voters of his district until he retired in 1994 after serving 12 terms. Studds is survived by his spouse, Dale Hara, who he married in 2004 after Massachusetts legalized same-sex marriages.
Posted by Gary R. Welsh at 11:25 AM

well hell, now Sean Hannity will have to kick around a dead man...he's been Studds-bashing for a week.

Good bye and good riddens. Let him spend eternity in a hot place.

It takes all kinds, Gary.

A Democrat Congressman has sex with a page and all is forgiven, A Republican Congressman types about having sex in an E-mail with a page and he needs to quit. And thats not good enought...other heads need to roll too. More leftist BS. It was wrong, but the Democrats can never see it when it happens in thier own backyard. They can only throw sticks at others for doing the same silly things.

Here are the facts:

In 1983, Mr. Studds acknowledged his homosexuality after a former Congressional page revealed he had had a relationship with Mr. Studds a decade earlier.

Mr. Studds, a Democrat, was censured by the House for having sexual relations with the page. He acknowledged having sex with a 17-year-old male page in 1973 and making sexual advances to two others and admitted an error in judgment, but he did not apologize.

When he was required to stand in the Well of the House to be censured, he turned his back on the House and then defended his actions as a mistake of judgment but a consentual matter between two adults. The page was 17, and 16 is the age of consent in DC.

I'm not into bashing the dead, but the point of that last post was....?

Studds' sexual activity with a House employee/page was disgusting and inappropriate. The kid was one year over the age of consent. Big deal. Coulda been my kid. Yours. Studds' inability to apologize shows lack of contrition. The House's response shows a lot, too.

Clinton turned an intern into a humidor a decade or so later. Then squirted all over a dress. The big ole perv. Get a room already.

This from my party, which championed workplace rights, women's rights and civil rights.

But I'm told Studds was a brilliant legislator.

As if that makes a difference. (sigh)