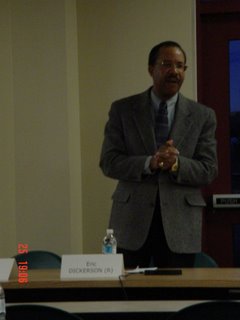 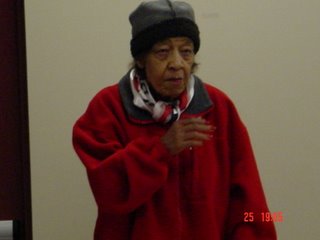 Both candidates for the 7th District congressional race appeared at a candidate's forum last week at Crooked Creek. Unfortunately, the mainstream media once again failed to cover one of the few events this year at which both Rep. Julia Carson (D) and Republican Eric Dickerson appeared. I did not learn that both candidates were going to appear at the event until the night of it, so I wasn't able to make it. Apparently the event organizers didn't know that Carson was going to be present either until she showed up. Sir Hailstone sends us these two photos he took of Carson and Dickerson at the candidate's forum
Posted by Gary R. Welsh at 11:54 AM

Don't feel bad about missing that event - I did too! Our Congresswoman Julia Carson didnt decide until the last minute to go herself...

Nice hat. Who's sweater did she wear? It's Dickerson's colors. Maybe she trying to tell us something.

Julia Carson has long and winningly used red for her primary campaign color. I found it kinda sad that ED would so shamelessly copy to try to deceive voters.

He's out of fresh ideas on the issues too - he's just another Republican wanting to join the failed and corrupt GOP Rubber-Stamp Congress in Washington. A slick used car salesman who'll say anything to get himself elected. An allegedly successful businessman who wont invest any money into his own sputtering campaign. Why invest your own vote when he wont invest his own cash?

I saw it all and it was a normal performance for Julia.

When Dickerson and Carson were asked a question about immigration, Julia started to talk about the war. (??? The crowd was looking around at eachother in confusion since that was not the question.) She did, again, repeat her conspiracy theory on the gas prices though which is always fun to listen too.

She personally attacked Dickerson and his car dealership. (Hey Julia, I thought you weren't going negative???)

But the posted pictures say it all! She is representing ME???!!!

Matt Tully went to Crooked Creek and saw it all himself, the Star had it right:

"During an hour-long interview with The Star's Editorial Board, Carson frequently rambled and was disjointed in her responses to questions."

hmmm .... 1 IndyErnie, 3 Wilson46201s and 2 AnonyMice too ashamed to speak without a technological ski-mask for their driveby assaults ...

Are cowards the best that ED can find to knock Congresswoman Julia Carson? They must come cheap because he doesnt have any money to pay for much of anything!

Once again, Wilson, real s-l-o-w-l-y, so even you can get it thorugh your thick dyed dome:

Some people post anonymously because of the ridiculous retribution imposed on anyone who thinks against the Center Township Democrat machine.

It has happened. Repeatedly. Recently.

What else competed with her schedule time, that a decision had to be made lastminute? It implies that a choice was made vs. another event.

Or was it the living room couch that lost out?

Clearly she left the house without looking in a mirror. My God, was she going to the grocery or to an event in front of her constituents?

Did she see Mae at the event?

Jezz Wilson get a life.
You've been around Carson too long...the both of you do nothing but ramble.

Two more scared AnonyMice shilling for ED? - most likely the same cowering AnonyMice as before - one is all afraid and frightened of saying anything in public - silly AnonyMice act like this is Bush's Iraq. This is America!

You've been listening to loser Tandy too much - she blames all her troubles on one strong successful Black woman: Julia Carson. J.T. skulks around saying: "And the Carson will git ya iffn ya dont watch out!" [apologies to J.W.Riley]

I agree with the President, it is time to Get-Out-the-Vote for the GOP ticket.

Enough with babbling back and forth with Dumb Wilson. He is
nothing but a distraction from the real deal here. The Ghetto Mafia Queen Julia Carson is too old and senile to change her ways.

This will be shown on Comcast Channel 28 and Bright House Channel 17.

You are one sick idiot. When you make deals with the devil, look at the results.

Wrong again, you are the loser and so is Carson, you can look at her physical condition, it says it all.

I have my physical health which is better than winning any election.

Don't fall for the regular media hype! The dems have no plan for anything. Just get those pesky republicans out of office and we'll figure it out later is the plan.

The people want a change. Not a congresslady with an imaginary friend. If you look at the picture, it is easy to see that she is her own worst enemy.

Dickerson is going to win, it is clear to all.

He's out of fresh ideas on the issues too

Sorry Tokyo Rose Wilson. He has plenty of ideas. Unlike Julia who is an obvious tool for Nancy Pelosi.

I found it kinda sad that ED would so shamelessly copy to try to deceive voters.

Red State - Republican - even a dumbkopf like ... oh never mind.

Very successful businessman. He even sold your Congressperson a Buick Roadmaster. Unlike Julia Carson the alleged Congressperson. Only 43 bills introduced in TEN years of being in Congress. And when it came to gay right she doesn't bother to vote at all.

Why invest your own vote when he wont invest his own cash?

You're just getting your panties in a wad because you can't accuse Eric Dickerson of trying to "buy" to election. As it is he has ample support to get the message out to the people.

Your "GOP Rubber stamp" bit is getting old. it was old when Howard Dean put it out there for the first time.

Your recorded rhetoric is getting old Tokyo Rose Wilson.

Jocelyn, you may have your health but you long ago lost your common sense and your reputation ... your life has been consumed by hating on good people, particularly Andy Jacobs and Julia Carson.

This ED campaign is just another stage in your jihad - when he loses, you'll latch onto another unwary politician and jinx his campaign too like you've done for years. Keep backing the GOP in Indianapolis - they'll continue to lose bigtime!

fwiw, Trustee Julia Carson bought her big old Buick Roadmaster when ED was still at Allisons. I recall her getting the vehicle in the early 90s while Trustee. It was totalled in late 2004 - she coyly called it "a fender-bender".

Is it lonely out there Wilson - being Julia's only defender. She must think of you as her Knight in shining armor.

So, that joint appearance at Crooked Creek, is going to be retelecast on Oct. 31?

How appropriate. Julia wore her costume. She came as a frightening babbling old lady.

I was there. It was kinda scary.

Say, Wilson, about that schedule thing: if she came at the las tminute, as alleged, what event got second-tier?

I thought that was a damned fine question.

Rose Garden strategy, huh? It worked for Reagan when he took a nap every dya. Won't work for her.

usafshark said...
This comment has been removed by a blog administrator.
10:26 PM GMT-5

We do not need that stuff here.

usafshark said...
This comment has been removed by a blog administrator.
11:24 PM GMT-5

Liar! Liar! Julia Carson has always challenged her male opponents with no negative campaigning early. After they agree, she throws the first rock.
She can't use the race card this time with Dickerson. So she has Wilson blogging all over the place about 3 issues.

1. Less campaign contributions than Carson, even though she is bought and paid for by special interests.

2. His successful business record, and the sale of the dealership. She attempted to make the sale of his business to Ed Martin a negative with Fifth Third Bank.

3. A 15 year old police report where the charges were dismissed by a Democrat prosecutor. Yet, Wilson continues to comment as if he were convicted of the charges.

I am sure this was the plan immediately following the Primary Election. But it all backfired on them. So now Julia's number one puppet is repeatedly talking about Dickerson's lack of campaign funds for the campaign and viciously attacking his supporters for defending him.

Liars! Liars! There has not been a discussion of key issues or a plan for solutions to problems important to voters in the 7th District. We get rambling propaganda from Wilson and rambling rhetoric from Carson. Congress is not in session, but there is no calendar on her website for voters to meet her on the campaign trial. No accountability is her trademark. But, I have to admit, she has been allowed to get away with it for too long because the local media didn't find it important enough to report her conduct to her constituents. They have to read Washington newspapers to know what Carson is doing in Washington. Could it be that former Congressman Andy Jacobs keeps the wolves from her door and is still running the office?

Definiton of 46201:
Wilson needs to worry about his own reputation. Suffering from an inferiority complex. An uneducted idiot, puppet, fool, nut case, confused, insecure homosexual white male seeking recognition for his failures in life. He needs Julia Carson's friendship to make himself feel important. Wants to run for public office, but lacks the guts to do it. A coward in his own right and he knows it for fear of having his personal life revealed to the public. No place to run, no place to hide, just blogging in anonymity for entertainment purposes. No life of his own, attempting to live his life through the life of a dirty politician. Willing to be used for her dirty work just to be accepted and recognized.

Wilson and Carson have two things in common, a sloppy appearance and viciously attacking anyone superior to them. Birds of the same feather usually tend to flock together. Trashy people always associate with other corruptable wannabees. A title does not change the character of an individual.

hmmm .... 1 IndyErnie, 3 Wilson46201s and 2 AnonyMice too ashamed to speak without a technological ski-mask for their driveby assaults ...

The sad thing is that you are the only person willing to post FOR Julia - anonymous or not. Talk a BIG FISH in a VERY SMALL POND.

Julia Carson cannot be considered successful because she is elected. She had to sale her soul to get there. No reason to envy her or to imitate her.

Based on those pictures, it's sad to see that she represents us in Congress. It shows no respect for herself or for her constituents. She looks like a bag lady.