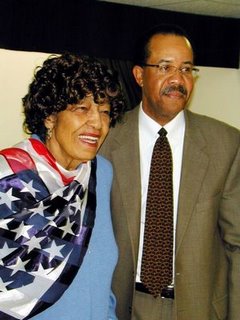 Evans' story does not engage in any speculation regarding the performance of either candidate. He does, however, provide a fair assessment of what was said by the candidates. On Dickerson, he writes:

Dickerson took the opportunity to tell voters it is time for a change.

"We're in a new century," Dickerson said. "It takes new ideas, new vitality and new leadership. This country has got to start moving forward again."

While not directly criticizing Carson, Dickerson made several references to the records of some members of Congress.

"Having a good heart doesn't mean that you should hold a high leadership position," he said. "It is about what you can deliver -- it's not about what you hope will happen . . . I'm trying to focus on solutions."

Dickerson lamented the conventional wisdom that Congressional candidates must raise large amounts of money to seek office, saying every donation comes with "strings attached." He also supported most mainstream Republican views on Iraq and domestic spying.

Evans describes Carson's efforts to portray herself as a public servant and not a politician:

Calling herself a public servant, not a politician, Carson said her focus is on domestic issues, including the rights of women, children and senior citizens. She also slammed President Bush and the Republican-controlled House and Senate for jumping "into a war we didn't need to."

"We went after the wrong enemy in the wrong way," said Carson, one of the few members of Congress to vote against going into Iraq.

Carson said that doesn't mean she is not supportive of American troops and their families. To the contrary, she said, the administration has failed to support our troops by sending them into action without adequate ammunition, equipment, vehicles or plans.

Carson said she hopes voters elect a majority of Democrats to the House and Senate next month "so we can resolve this issue in a sane and responsible way."

Evans notes the event organizer, Connie Wick, was "pleased with the exchange of ideas and the civil tone of the evening." I had a brief opportunity to speak to Evans following the debate. I would note that the debate didn't end until 8:45 p.m. so he had a very short deadline to get his story submitted. I add with disappointment that among area TV stations only WRTV bothered to showed up to cover the event. WISH-TV's Jim Shella, who sees himself as the top broadcast political reporter in Indianapolis, didn't bother with the event. If you hold yourself out as a political reporter, how can you possibly not attend an event like this? Is at any wonder he seems so ill-informed when he discusses this race on Indiana Week In Review?
Posted by Gary R. Welsh at 7:16 AM

It should be a POX on the Carson campaign if they decide not to do some sort of telivised debate.

It does not help that they refuse to make Julia Carson available to an AP reporter for a story a dozen times.

2 years ago CHAN 8 hosted a debate with the 3 candidates running for Congress.

If there is not a debate on Chan 8 again this year the fault must fall squarely on the Carson campaign. They have the power to say YES or NO.

Eric Dickerson has repeatedly stated he would debate any time any where any place - no preconditions.

If who I thought was Tim Evans he was the fella up front with the Colts hat and a big "I [heart]Julia" sticker on his shirt. He had a reporters notepad on him and the only other person I saw with a notepad was Abdul.

Useless fluff piece. Then again should we expect different from McPaper?

Sorry to disappoint Sir Hailstone, but I was the guy sitting up front with the Colts cap and notepad, and I assure you I didn't have a Julia sticker on my shirt. Tim Evans was sitting up front, though, on the left as you faced the candidates with note pad in hand.

Really? I thought sure you had one on your shirt - seemed like the only ones without Julia stickers were the Eric volunteers.

As I said the only folks I saw with notepads were Abdul and yourself.

2 years ago CHAN 8 hosted a debate with the 3 candidates running for Congress.

I agree. Just don't ask poor Mr. Plemons to come on to debate. As I stated on my blog it was like listening to Forrest Gump or Al Gore. Same difference really.

Hmm.. another example of Hailstone with blinders on perhaps?

It was indeed poorly covered. Where was Mr. Political Analyst Brian Howey, all-the-news-that's-not-fit-to-print Ruth Holladay, Jennifer Wagner of Taking Down Words , etc. etc.?? I wonder if there was a snob factor here since it was held at a "senior community" and thus deemed unworthy of coverage?

I did not go last night; alas, I have a life and other commitments. That's where I depend on the local media.

Surprise. They (mostly) weren't there. Shameful.

I have been to this debate three of the last 4 elections. Julia is always there, as are her worthy opponents. The media has never, ever covered one sentence of it, as I recall.

This year, we fend for ourselves.
(sigh)

If voters want a change in this seat, Eric Dickerson was more effective in this forum than Carson. Julia Carson was the same tired speaker as usual. It was very clear why no major media is sponsoring a debate in this race. Dickerson would win hands down.

I attended the forum. Her supporters lead her in, set her down, helped her to the stage and they had to lead her out. Julia Carson was exhausted after the hour long exchange and it showed. They had to help her out of the car and into a van afterwards. She needs to retire. Carson did not work the room before or after the exchange. She compares herself to Senator Lugar who is older and has served longer. However, the big difference is, he is in good health and does not avoid his constituents.

She said nothing of substance for the 8 years she has been in congress. Once again, Julia and the Democratic Party are taking the voters in the 7th District for granted. Talking about the future and not talking about her past track record in congress. I will give her this much credit. She had several of her goons with her, and of course Wilson Allen46201, her number one puppet was running around like a fool taking pictures of everyone in the room with his camera. I doubt if he has film in the camera. She has always had the gift of gab and recites rhetoric, but you can never nail her down on anything. The Star has never printed the truth about her or her real character, thanks to former congressman Andy Jacobs, the man behind the scenes in the Democrat Party who is pulling all the strings.

This isn't directly related to the post but, as always, the most responsible conservative republican voice today, Andrew Sullivan, says it best. This is from today's Daily Dish:

A conservative Kansas newspaper, The Johnson County Sun, prepares its readers for impending endorsements of Democrats. The paper has long been reliably Republican, as has its chairman. But no longer. Money quote:

If I was a closet Democrat, I must have hidden it well, especially from myself, since I always beat up on Democrats in my columns. I have called them leftists, socialists, and every other name in the book, because I thought they were flat-out wrong.

And, for the most part, I still do. I am opposed to big government. I have little use for unions. I never liked the welfare plans. I am opposed to weak-kneed defense policies. I have always been for fiscal prudence. I think back to the policies of most Democrats, and I cringe.

So, what in the world has happened?

You almost cannot be a victorious traditional Republican candidate with mainstream values in Johnson County or in Kansas anymore, because these candidates never get on the ballot in the general election. They lose in low turnout primaries, where the far right shows up to vote in disproportionate numbers.

To win a Republican primary, the candidate must move to the right.

It means anti-public education, though claiming to support it.

It means weak support of our universities, while praising them.

It means gay bashing. Not so much gay marriage, but just bashing gays.

It means immigrant bashing. I'm talking about the viciousness.

It means putting religion in public schools. Not just prayer.

It means mocking evolution and claiming it is not science.

Note, I did not say it means "anti-abortion," because I do not find that position repugnant, at all. I respect that position.

But everything else adds up to priorities that have nothing to do with the Republican Party I once knew.

That's why, in the absence of so-called traditional Republican candidates, the choice comes down to right-wing Republicans or conservative Democrats.

And now you know why we have been forced to move left.

I know exactly how he feels. And if this recognition is going on in a small paper in Kansas, then there's hope for conservatism yet.

My name was being mentioned on this blob by Wilson before I knew it existed. Wilson "ghost employee" Allen 46201 is a "dog" and a coward. He continues to bring my name up on these blogs.

To date, he has never admitted to or denied the criminal acts committed during his term as Clerk for Center Township. Julia knows he is a loyal idiot and uses him to do her dirty work. Obviously, he has agreed to do it. Personally, I could care less about Wilson Allen or his chosen lifestyle; he is a non-entity in the scheme of things.

His primary assignment is to keep my name before the public because he knows that I am the biggest threat to Julia Carson and the rest of the Democrats. I will support who ever I think is the best candidate for public office. They are really curious whom I am supporting. I don't have to be identified with any candidate's campaign. I am a community activist. Wilson just doesn't get it. I left the Democrat Party on my own terms and they know it. The rumors flowed after I served them notice.

The black vote has been taken for granted by the Marion County Democrat Party, and it really shows in Center Township. Pardon me Wilson; I have always exercised my constitutional rights.

Neither he nor Julia will ever admit to the voter fraud committed in Center Township for years to win elections. I am one of the few people who know where "the bones are buried." His job is to attempt to discredit me so the truth will not be told.

They all know that I am not a puppet and never will be for any politician.

I don't live on the plantation!

Is this a political blog or a boxing ring for Wilson and Jocelyn?