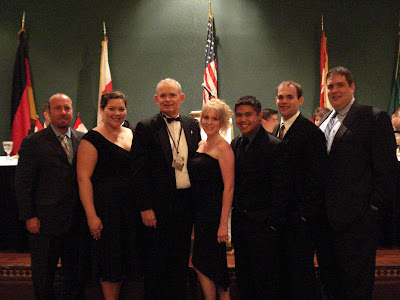 This past week I've been in attendance at the Phi Delta Phi International Legal Fraternity's convention in Fort Lauderdale, Florida. As the province president for the active inns in the State of Indiana it was real honor to see two coveted awards go to the Willkie Inn at IU School of Law--Indianapolis. Willkie Inn was recognized for the second year in a row as the International Inn of the Year thanks to the leadership of its outgoing magister, Terri Michener. Suzanna Hartzell-Baird of Willkie Inn was also the recipient of the International Graduate of the Year award. She is now making preparations to clerk for Indiana Supreme Court Chief Justice Randy Shepard. The convention delegates chose Tetsuji Tamashiro of Mexico as its new president. Shown in the photo above from left to right after me is: Terri Michener, former Phi Delta Phi International president and Willkie Inn graduate Karl Mulvaney, Suzanna Hartzell-Baird, John Lira (Willkie Inn), Kent Morehead (Foster Inn-IU Bloomington) and Michael Haines (Norris Inn-Valparaiso).
Posted by Gary R. Welsh at 8:27 AM