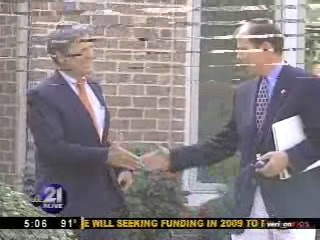 In a move likely to draw more attention to his lack of support for the campaign of Indianapolis GOP mayoral candidate Greg Ballard, state GOP chairman Murray Clark visited Fort Wayne to drum up support for indicted mayoral candidate Matt Kelty. "The State’s GOP Chairman acknowledges the nine-indictments Kelty faces do not help his quest to be mayor," reports Indiana Newscenter. "But the Chairman contends Kelty’s a fierce campaigner, and the party anticipates a win in November." He tells local reporters Kelty's recent 9-county indictment is a mere "bump in the road."
Meanwhile, local Indianapolis Republicans complain that Clark and the state party aren't lifting a finger to help Greg Ballard's candidacy against Mayor Bart Peterson. Most observers agree that both the Fort Wayne and Evansville mayoral races are lost causes for the GOP this year. Polls show the race in Indianapolis, the state's largest city, is winnable for Ballard. So why won't Clark help Ballard? Is it because his law firm has a vested interest in Peterson's re-election. Or is it because Clark wants the seat to remain in Democratic hands until he's ready to make the run himself? Take your pick. Critics are offering both explanations.
Posted by Gary R. Welsh at 11:00 AM

There won't be anything left but smoldering ruins by the time Bart completes a third term. They'll run off the few Republicans and Indy will be a Chicago kind of Democrat - Corruption being an acceptable part of the political landscape.

The Dems own Lake County - look at the results - one big steaming pile of dung!

I doubt that the Mayor will even complete his third term. Republicans who think this will be an open seat in four years are dreaming.

Gary, there are no credible polls that show this is a close race. It could turn into one, and Clark would do well to spend time here, but in all honesty, a state chairman can only do so much.

And Murray is choosing to do his "just so much" in Ft. Wayne. Tee-hee.

Just so that we all understand "credible polling", it's polling done with a response base that closely resembles Marion County's demographics and voting patterns. Which is not the Tom John early August poll. That poll was a nice try, but not even close to being properly stratified as to party identity.

(I just love it when Republicans eat their young...)

Perhaps republicans don't want a close race in indy that might bring out democrat voters who in turn vote may for a democrat gubernatorial candidate???

That's very foolish and short sighted of the Republican leadership! Are you listening Murray??

It's sad when Ballard is lower on the totem pole than an about-to-be felon...

So much for that upset victory, Gary.

Anon1:02: I don't understand your comment at all. Is there a gubernatorial race this November of which I'm not aware?

And to be safe, sleep flat on your back tonight. Elsewise, your brains might roll out when you roll over.

"Gary, there are no credible polls that show this is a close race."

Credible defined as a poll that Democrats agree with. Ones that show their candidates winning 99% to 1%

You can put garbage in, and geet garbage out. But Anyone who thinks this is a 41-40 D county, well...hold that thought until Nov. 9 or so...

Tom John's earlier poll was not representative of the county's voting habits, recent or projected.

I do think Bart's numbers are down. But they're nowhere near where John's poll had them.

Clark knows who butters his bread. GOP money, and mean TONS of GOP money has been invested in the Peterson's campaign.
Peterson may be running wearing a Democrat label on his cap but it's money from former GOP contibutors with a vested interest in the outcome this race that make it virtually impossible for Ballard to even come close to winning.

Sad to say but Peterson has been the best Republican mayor this city has ever seen. When Beurt SerVaas gave Bart his blessing you knew the game was the same only the demographics changed.
As for Wilson and the Carson crowd they've been played by the old money GOP like a well tuned violin.