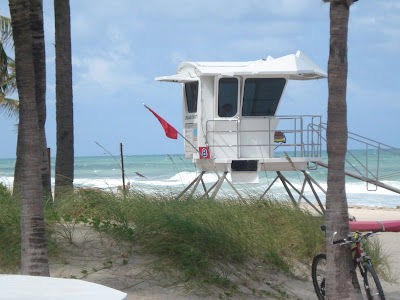 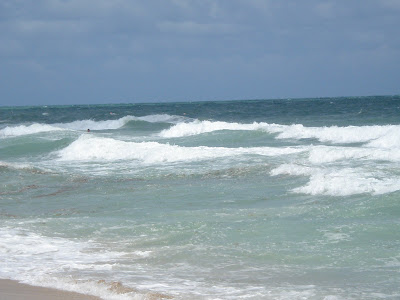 I encountered one of those near-death experiences today. After purchasing a $12 boogie board, I jumped into the Atlantic Ocean along the Fort Lauderdale beach today with boogie board in tow and was quickly sucked out by a rip tide--much further than this Indiana boy is accustomed to venturing into the ocean. Try as I might to return to the safety of the beach, I couldn't get closer to land. I eventually gave up the safety of my boogie board and began swimming inland. I was going nowhere. As I wore down, I suddenly remembered some TV show which explained how you were supposed to swim parallel to the beach when you are sucked out by a rip tide. Noticing that I had drifted southward, I began swimming south. This drew me closer to the beach to the point I was able to touch the sandy ocean-bottom beneath me. I began waiving my hands and screaming "Help". Nobody seemed to notice. Thankfully, I found the strength to crawl my way to land. A friendly guy came up to me with my boogie board, which apparently floated to shore without me in hand, and asked if it were mine. I said, "Yes, I nearly drowned." He said, "We thought you might have been distressed but we weren't sure." I said, "Yeah, thanks.

Later, I spoke to a lifeguard at the nearest lookout point. She told me I should have been aware there were rip tides because the "red flag" was flying. That's the one wrapped around the flag pole in the photo above because of the strong winds today. She explained to me how you should know there rip tides are present. She noted I entered the water where there was a lot of stirred up seaweed near the shoreline because conditions created a hole in the sand near the shoreline--a sign of a rip tide. Experience surfers use rip tides to their advantage to quickly get out to where they want to be. She said the rip tide would carry you out only so far and not any further. She assured me lifeguards had me in their sites all along, and that I was in no danger of being lost. I have to tell you from where I stood, I was as near death as I've ever been. At this point, I just feel lucky to be alive.
On another note, the friendly lifeguard advised me to avoid contact with sea weed because that's where sea lice thrive. If you start itching really bad when you leave the water, she advised that you should never use wash off with water only at one of the shower sites along the beach. You need to take a soapy shower to rid yourself of the sea lice. If you scratch, the lice will only burrow deeper into your skin. I recall a couple of friends who spent months trying to rid themselves of this form of lice after they returned from Florida. So there's you second helpful hint for the day when visiting the beach in Florida.
Posted by Gary R. Welsh at 4:32 PM

Glad to hear you are OK. Be safe.

Thank, anon. Learned my lesson for sure.

Hate to interrupt your trip, but thought you'd be interested in this...

check this out....the axe will be falling

Gary, a friend lost his 15 year old son to a rip tide off the coast of Mexico last month. The boy drowned seemingly in an instant, and it took days to recover his body. Rip tides can take even a strong swimmer, I'm so glad that you were able to ride it out and survive. Count your blessings.