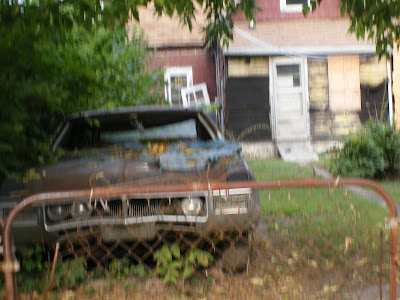 "He understands that safe, clean and liveable neighborhoods are vital to our quality of life, and is dedicated to making our neighborhoods world-class." At least according to City County Councilor Patrice Abdullah's self-written biography on the IndyGov website that's what he supports. Yet, he refuses to remove this abandoned car in the back yard he claims as his residence, which the city has been continuously prodding him to dispose of for more than a year, he has been ordered to cut tall grass and weeds and clean up trash on the property. An ongoing renovation project on the residence has been the subject of numerous building and zoning code violations. And serious doubt remains as to whether he now occupies or has occupied this residence any time recently in his 15th district or otherwise resides in the district within which he must legally reside to hold his council seat and seek another term this November.
I understand Councilor Abduallah sees it quite differently from what several sources tell me. He complains he is being targeted because he's black and because he's Muslim. Most of the people who have contacted me about Abduallah's residency are in fact Democrats and are not in the least bit racist or bigoted towards his religion. And this isn't a partisan effort. If Abduallah resigns his seat tomorrow, he will be replaced by a Democrat of his party's choosing. The Republican Party fielded no candidate in the 15th District so a Democrat will represent the district the next 4 years, with or without Abduallah. His departure will not affect which party controls the council after this November's election.
It is also Democrats who tell me Abduallah does not live at the residence on Sheffield Avenue or the one on Warman Avenue he lists on the IndyGov website, which is located in Councilor Marilyn Pfisterer's district according to the district finder on the city's website. They insist he lives in a residence near Washington Park in Councilor William Oliver's district on the city's northeastside.
On the issue of his Muslim faith, it is Councilor Abduallah who originally misrepresented the source of some of his campaign contributions in his election four years ago to hide funds he received from Muslim sources. Why? If his opponent, Brad Klopfenstein, hadn't bothered to file a complaint with the Marion Co. Election Board, we would have never known about Abduallah's misrepresentations. After significant prodding and foot-dragging by the election board, Abduallah finally amended his campaign finance reports to more accurately report the source of his contributions and was given a mere slap on the hand with a $100 fine by the election board. Klopfenstein complained that the numbers on his campaign finance reports still didn't add up even after he amended them.
As to the lousy condition of Abduallah's residence on Sheffield Avenue, if you're going to use a taxpayer-funded website to boast that you are working on their behalf to build "safe, clean and liveable neigbhorhoods", you better be prepared to live up to those standards. Clearly, Councilor Abduallah believes in "doing what I say, not what I do". Drawing attention to his blatant hypocrisy has nothing to do with the color of his skin or his religion.
It's time for Councilor Abduallah to go. Members of your own party believe that time has come. Now it's time for Mayor Bart Peterson (D) and Marion Co. Democratic Chairman Mike O'Connor to do the right thing and tell Abduallah he must go. The people of the 15th District deserve better than this.
UPDATE: Abdul Hakim-Shabazz reports that, according to city records, Abduallah has listed the Warman Ave. address, which is not in his district, since June, 2007. He questions whether Abduallah's vote for the tax increase, which passed by one vote, should be invalidated, thereby calling into question the legality of the tax increase vote. He writes:

Call me crazy here, but I was under the impression a Council member was supposed to live in their district or they had to give up the seat? According to the Council's latest public list of addresses, Abdullah has lived on Warman since June of 2007. So what does this mean, you might ask? District 15 is heavily Democratic and there is no Republican on the ballot, so Democrats would keep that seat. That's right. But depending on when Patrice moved to 1144 Warman, his votes on the council subsequent to that time could be considered illegal and therefore invalid as he did not lawfully reside in his district.

One vote that comes to mind immediately is the public safety tax vote that was held on July 23. If 1144 Warman was Abdullah's home address at the time of the vote, and there is no reason to think it wasn't, an argument could be made the tax increase was not properly passed because the vote (15-13-1) did not have a majority because Patrice should not have voted. And this goes for any measure that Patrice has voted on.

I emailed "President" Gray today, and asked him about Mr Abduallah's residency issue. He stated, that if it were discovered that he doesn't live where his biography claims he lives, then he would have a problem with it.

Not that "President" Gray has found his morals somewhere, but I think the fix is in for Mr. Abduallah. First, Jen Wagner throws some fuel on the fire with her helpful tidbit of information regarding residency time frame. Now, you have Monroe Gray saying he'd have a problem with it.

The Dems have to realize, they can not afford ANY more problems.

People in his own party want him to go! Some of them are on the council! However, they were told not to "make waves" or they would face opposition in the primary themselves led by the "Ghetto Mafia."

How long until Matt Tulley or someone else in the local "media" run an article on this instead of the same hot air?

Is this Indianapolis or a new version of Tammany Hall? Julia Carson is Boss Tweed and Peterson is merely her puppet!

Apparently all Indianapolis politics revolve around "Our Queen" as she's known among some elected officials.

The gig is up. 10:50 hit it on the head. We Dems cannot afford any more nonsense.

Patrice is an absolute disgrace.
He needed to go four years ago. Thing is, he'll fight like hell to hold on, and want to know why?

It's his only real income. If you doubt me, sit back and watch. He'll be like a bulldog. Deflect and deny. Get angry.

His bio says he wants "world class" neighborhoods...Third World Class from the looks of it.

The address Patrice uses for the council as his residence doesn't say if it's north or south Warman. One is Marilyn Pfisterer's district - the other is Dane Mahern's. He actually lives in Mary Moriarty Adams district - not William Oliver's. Since both addresses are listed with the city, Monroe Gray already knows.

Race and religion have absolutely nothing to do with the issues at hand concerning Patrice.
The City of Indianapolis can hit this property he owns with what is called the "blight penalty". This penalty is issued by the Marion County Health Department. Fines start at $2,500 and can be as high as $5,000.
To deal with this blighted property all that needs to be done is to contact the Marion County Health Deptartment so that they get a file going on it. It does no good to complain on blogs.

The residency issue seems pretty cut and dry. Comlaints need to be filed with the proper authorities and the issue resolved.

Since you have all the facts Gary, then file for action to be taken immediately thru the proper legal channels. Don't wait, strike while the coals are still hot.

anon 9:20, there is a file open on Abduallah's property. As I said in my earlier reporting, he has been cited on numerous occasions for the violations and his case has been referred for legal action.

"I understand Councilor Abduallah sees it quite differently from what several sources tell me. He complains he is being targeted because he's black and because he's Muslim."

If you oppose me, you are a racist and a religious zealot. Nothing like leading off with the race card huh?

The problem with fines is that
when they start approaching the
fair market property value, it
becomes a disincentive to start
or complete repairs and ultimately
ends up going to tax sale. Eventually, the city/county gets
it back in even more deteriorating condition, tears it down and it
becomes another vacant lot. Maybe 10 or 15 years after that, if the
city or county is lucky, Habitat comes along and then re-builds a
new house. Requesting a Court
to confirm the building/health dept. administrative decision to
repair and then seeking Contempt of Court might be a more effective
remedy sometimes.

YOU SAID: Eventually, the city/county gets
it back in even more deteriorating condition, tears it down and it
becomes another vacant lot. Maybe 10 or 15 years after that, if the
city or county is lucky, Habitat comes along and then re-builds a
new house.

RESPONSE: Unless they sell the lots to the peashake house owners through a CDC such as AMWAU in Senator Howard's district.

If this is such a big issue the County Republican Party needs to file a lawsuit to get him out of office... or at least use some party connections get the State Attorney General to investigate?

I remember mumblings of Stephen Goldsmith living outside of Marion County for part of his tenure as mayor (at least through the grapevine with no real evidence...) maybe someone doesn't want that to come out?

The (R)'s are looking for something to attack; this is the best low hanging fruit handy!

Corruption is as corruption does!

Get out while you can.