How Safe Are Our Bridges? 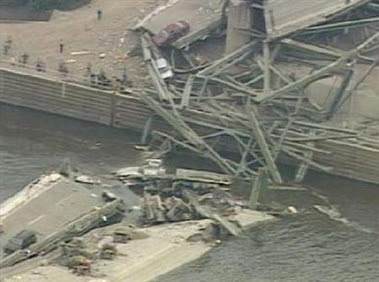 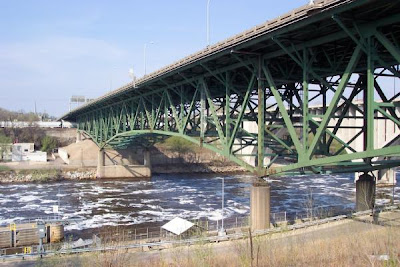 Here's a photo of the I-35W Bridge over the Mississippi River in Minneapolis which collapsed this evening, leaving several dead and many others injured. The bridge, as it appeared in the photo above prior to the collapse was built in 1967. Its claim to fame is a single 458 foot long steel arch to avoid putting any piers in the water to impede river navigation, which might help explain its failure today. I discovered there was an in-depth inspection of the bridge in 2003, which gave it a "med-low" criticality rating. The comments indicate the need to "monitor fatigue cracking from out of plane bending at the approach girders and diaphragm connections." I'm not an engineer, but that couldn't have been a very good sign. Indeed, a transportation report last year said the "bridge would need to be reconstructed or replaced in the coming years." Early reports indicate the bridge was under construction at the time of the collapse, but that work simply involved surface repairs to the bridge. The Department of Homeland Security has already issued a statement indicating terrorism is not suspected. It looks like the case of an old bridge somebody failed to properly maintain. It's a major artery in Minneapolis so its loss creates a bit of transportation nightmare for the city. If a 4-year-old report alerted transportation officials to these problems, why was the bridge not closed to make the needed repairs? How many other bridges like this exist around the country?
UPDATE: The AP reports: "Gov. Tim Pawlenty said the bridge was inspected by the Minnesota Department of Transportation in 2005 and 2006 and that no structural problems were noted." "There were some minor things that needed attention," he said. How do you square that with the 2003 report I link to from the state's own Department of Transportation? And why has nobody else in the media picked up on this 2003 report? Hint: A simple Google search is all it took to find the 2003 report.
CNN has a spectacular security camera footage of the bridge's actual collapse. You can see the center span giving way and falling straight down into the water.
Posted by Gary R. Welsh at 8:10 PM

You have better information than the cable news network reports. They are saying the bridge was last inspected in 2004 and it didn't indicate any serious issues. The 2003 report you link to tells a much different story.

As an engineer, you are asking a lot of questions that you don't want the answer to. ASCE issues a report every year that is scary.

Taking off my engineer's hat - the cost to maintain infastructure at an ASCE grade "A" level is prohibitive.

Putting it back on, there are a whole lot of state and federal regulations and mandates that do their best to prevent anything close to a failure. Unfortunately, it is statistically going to happen.

The particulars on this situation will be interesting.

It is very expensive to maintain our aging infrastructure. But it must be done. Or more trageties like the I-35W bridge collapse would happen.

Keep in mind that U.S. spends billions dollars a day in Iraq. This country has the resources. The question is whether our elected officials and traveling public think it a priority.

Answer to your first question:
Nutball Jesse Ventura set
Minnesota back quite a few
years.

I agree with 8:54. I think the way this story plays out is going to be a very good exercise in government (or lack thereof.) I'll definitely be praying for everybody...

A friendly correction to the 10:39 comment: the US is spending only $12 billion a month in Iraq, including building and rebuilding bridges for them. The fiscal resources are indeed available for the crumbling US infrastructure if desired ... the GOP has set a higher priority on the Tigris and Euphrates than for our Mississippi.

Examination of the cause of this tragic event will likely reveal the reality of DOT funding dynamics. (whether we're talking state or federal transportation depts). Repairing "crumbling" (as some are fond of saying) or aging infrastructure is far less exciting for your average politician than, say, building a great NEW road or bridge or widening a road to growing areas of development or hard-to-get-to areas served by politicians who've amassed power. Thus you get your "Bridge to Nowhere" funding. Lots of transportation funding, or in particular priority funding, is by the "earmark" system. Heads of state DOTs are political appointees of the state's governors. They're of course subject to legislative whims. It happens in Indiana, it happens everywhere. It happens with the federal government. Reapirs aren't popular (especially when you add in public aggravation at closures & delays that accompany...).

Reports from Minnesota on the latest report on this bridge apparently already have noted that the stress or wear on this bridge didn't need to be repaired in the short term, wiht a note in the report "avoiding the cost of expenditure" That right there says they're not looking at black and white engineering issues, they're looking beyond to the funding issue, which means the political issue. An engineering analysis should care whether one can or wants to pay for repairs.

I don't suggest one should jump to the conclusion that the cause here was "repairs were needed by delayed in favor of other projects" No evidence of that. Nor do I suggest we can ignore fiscal realities in making decisions. But the statement simply reflects the intermingling of professional opinion and political reality. The bottom line is that the massive post-WW II infrastructure in this country is going to be enormously expensive to maintain from here out, and probably not one of us wants to deal with the costs of that. So we don't. Our leaders would rather cut the ribbon on a bridge to nowhere.

To clarify prior post: Engineers in thier analysis should NOT care whether we can or want to pay for repairs or not.

Commenting on costs savings is the sort of thing a politically appointed DOT head would put into a report to make his or her Governor or State budget director happy.

For context's sake, AI, most bridges have fatigue cracks to some degree, as do airplane hulls, and anything else that goes through large numbers of alternating stress cycles. They're usually monitored with an ultrasonic tansducer of some kind. The cracks grow at a stable, predicable rate for years, and then grow very quickly and unstabely near the point of no return. The "med-low" rating, to me, just indicates that the cracks were still in a stable growth regime - not ideal, but not something to shut down the bridge over, either. Whether or not something should have been done between 2003 and yesterday will probably come out here in the next couple weeks.

Just because there was some fatigue cracking, that doesn't mean the bridge was unsafe. All structures have wear and tear to some degree. It's easy to say now that someone should have kept that bridge in mint condition, but that's not realistic. Not one of us does that for anything we own, whether be our car, lawnmower, wiring, heating system, or anything else that might conceivably fail catastrophically. You can't rip out and replace a bridge every 2-3 years to keep it pristine. The lifespan of a major bridge structure is potentially decades, so I would not hold the mere age of the bridge itself against it.

I certainly support increased highway funding, but let's not leap to the conclusion that MnDOT was sitting on a bridge they new to be unsafe because they didn't have the money to fix it.

There own report from last year indicated it needed replaced or reconstructed in the coming years. You don't typically say that unless there are major concerns with the bridge.

I'm not a civil engineer, but I read they construct bridges to handle tank weight, i.e. for national defense purposes they don't build bridges like that which can't handle the full weight of tanks in every lane lined up bumper to bumper. That would be hundreds of tons more than what was on there in the first place. Aren't bridges built to much, much better specifications than they would ever truly be subjected to? If that's the case I would have to argue it's just a very tragic accident...

What are the legal implications of this for MN?