Do Looks Matter A Lot In Politics? 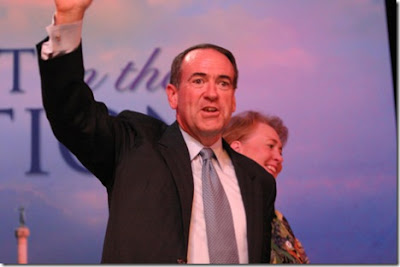 A thought came to my mind this evening as I watched Gov. Mike Huckabee (R-AR) being interviewed on Fox News' "Hannity & Colmes" tonight about his second-place finish in an Iowa straw poll over the weekend behind the photogenic former Gov. Mitt Romney (R-MA). Does a guy with an obvious lazy eye have a shot at becoming president? When I listened to Huckabee speak, I couldn't get my mind off that lazy eye and how it bothered me. It reminded me of that old, bearded guy who used to play in all the old western movies we used to make fun of as kids. Now I know it's very superficial of anyone to discriminate against someone simply because of their looks, but as a society we do it all the time. Football coaches are among the worst on that score. When is the last time you saw an ugly quarterback? Think about it.
No sooner had Huckabee's interview concluded than I ran across an article on the Internet discussing President Abraham Lincoln's facial defects. Laser scans of life masks made during Lincoln's lifetime have revealed he suffered from cranial fascial microsomia, a condition which left the left side of his face much smaller than his right side. Lincoln, like Huckabee, also had a wandering eye according to his contemporaries. He was mocked by his political opponents according to historians because of his rather homely looks. According to AP writer Carla Johnson, a Lincoln author, Nathaniel Hawthorne, described Lincoln's "homely sagacity" and his "sallow, queer, sagacious visage." Lincoln had nothing to do with his unfortunate bad looks. A kick in the head by a horse when he was a young boy may have contributed to his condition.
In a time when there was no television, Lincoln's bad looks did not get in the way of political and professional success, although he did suffer from deep depression. Since the age of television, however, we have not had any presidents who were distinctly ugly. Several, including Kennedy, Reagan and Clinton, were considered quite handsome by their contemporaries. A younger Ford worked part-time as a model when he played football at the University of Michigan.
On the GOP side, front-runner Rudy Guiliani is not a handsome man by any stretch of the imagination but it hasn't hurt him with voters or the ladies for that matter (he's been married three times). Mitt Romney is easily the best looking among the GOP candidates, but he's struggling even with all his money, running well behind the front of the pack in most national polls. Among Democrats, Sen. Hillary Clinton leads. Most men I know don't find her attractive, although she's certainly not ugly. Obama is running a close second, and his admirers consider him very attractive.
So back to Huckabee's lazy eye. I still don't like him, but that's primarily because I don't think a Baptist minister has any business being involved in politics, even if he does play a pretty good guitar and can sing Steppenwolf's "Born To Be Wild". As much as people would hate to admit it, I suspect the lazy eye is something most people don't want to have to look at every time their president gives an important televised address. What do you think?
Posted by Gary R. Welsh at 8:47 PM

His tax plan "Fair Tax" would make such an explosive inpact on our nation , People and future we wouldn't care if he was blind. More than all the others he can see better than all.

Having been elected governor of a small Southern state, it shows he's no slouch with the voters ... well, at least they don't running screaming from the polling places!

Until you mentioned it, I'd never noticed any unusualness to Huckabee's eyes.

The better question is can a guy who looks like Gomer Pyle get elected president?

It is funny how liberal members of the republican party will try anything to put down a conservative.

Rudy has no hair but you don't seem to putting him down and asking if he could become president.

I'm going to go out on a limb and call Jake Plummer of the Broncos ugly.

I know it's not really your point. But you did ask.

And to your point Wilson, while f-ability does seem to have an impact in presidential races in this age, I don't think it stacks up so much the same gubernatorially. For every Evan Bayh, there's a Frank O'Bannon and a Mitch Daniels.

As a follically-challenged man myself, I couldn't make fun of Rudy for being bald, although I cleary stated he wasn't handsome by any stretch of the imagination.

I'd never noticed it until now.

Anyhow, most politicians are not good looking by "Hollywood Standards." Look at LBJ, Nixon, Carter. A lot of girls told me they only found Clinton attractive because he was the president.

And I don't believe neither Rudy nor Hillary are all that bad looking. I actually liked Rudy better with his comb over.

I remember when McCain was running for President in 2000. I had one of his campaign posters on the wall of my room. It was a poster of him 30+ years younger wearing his flight suit and standing next to a jet. Each girl who saw that poster immediately stopped and said "Oh my Gawd! He was soooo hot!" Sadly for him, those looks are long gone.

Just noticed this too. Let's say he better have a lot of charisma and be able to convey his ideas really well. He can't be a so-so candidate.

"Let's say he better have a lot of charisma"

Archie: "I don't care how many diseases he had!!"

But, for the record, this gay man finds nothing attractive about Mitt Romney. His looks OR his politics. He'll flip at the drop of a hat, or when ambition steps forward.

Plus, he needs a haircut (his hair adds two inches to his heighth), and, in case you haven't looked, he's got the Brownback hairdye job. Not even close to natural.

It's hilariously black. I can't take a man seriously, if he's so damned vain he colors his hair to that degree. Remember Strom Thurmond's orange hair?

Doesn't he have a mirror?

This response has nothing to do with politics. I hope that it might be informative on the eye problem that many children and adults face.

"Lazy" is an adjective that many people find objectionable to describe a medical condition. It has the subtle connotation of a character flaw rather than a complex eye muscle difficulty that can't be corrected by simply putting forth more effort.

The correct term for the eye muscle condition that prevents the straight alignment of the eyes is "strabismus." When the strabismus causes one eye to lose acuity, that is termed, "amblyopia." Sally in Peanuts had amblyopia. You never saw the "L" word in Peanuts!

There is nothing "lazy" about it and many of us appreciate it if people would refrain from using that inaccurate and insensitive term.

Quite honestly, as long as the next POTUS can refrain from butchering the English Language, I don't care what he/she looks like. Huckabee can surely turn a phrase much better than our current wordsmith in chief.

Huckabee should be someone who is applauded, given that he has lost a significant amount of weight in the last four or five years in an effort to improve his health and to be a good example for the people he was elected to serve.

This is one of the most idiotic blog posts I have recently seen, and there are a lot of stupid ones out there. I guess this ugly factor is why Nader and Perot lost. Heaven help us if the best person to lead our country is not attractive so we turn him or her away. We get the government we deserve.

Looks are very important, more so than message. That is why Bush was elected over McCain (looks, along with some Rove-styled smear).

Since you did ask, there are a lot of unattractive quarterbacks. You don't have to look farther than your own city to find one. Yes, I said it, Peyton Manning is NOT attractive.