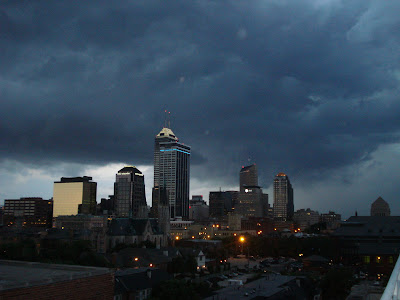 The dark storm clouds over downtown Indianapolis last night proved to be an ominous sign of a violent weekend. A 24-year-old man was shot to death last night on the front porch of his house on the near northside. Police say robbery was the motive. A 28-year-old was shot to death after he and a companion in his car stopped at a gas station on West 16th Street last night when two assailants carjacked their car. The companion in the car was pistol-whipped but managed to survive. And police were forced to shoot and kill a 22-year-old man on the city's near southside who was wielding a machete when officers entered the home in response to a domestic dispute and discovered one injured male down. Rest assured, though. The Mayor says we're winning the war on crime.
Posted by Gary R. Welsh at 2:53 PM

"Well, I don't exactly know
What's going on in the world today
Don't know what there is to say
About the way the people are treating
Each other, not like brothers

Stop the money chase
Lay back, relax
Get back on the human track
Stop racing toward oblivion
Oh, such a sad, sad state we're in
And that's a thing

We are strangers in a strange land.

Keep On Rockin' In The Free World

What up with Abdul at Indiana Barrister? Lots goin down and he's posting "fluff" on his blog.
Not at all like Abdul. Someone come down on him?

Spent the day at Atterbury getting some target practice ....

After this weekend I might need it next time I'm at a gas station.

If you believe the info over at IndyUndercover carjackings are UP 90% since 2006??? Holey moley!

4:44 PM EST...
I really hope Abdul reads the postings on Indycorrupt, regarding the bs merger and what it's costing the County taxpayers. There's enough fodder in there to talk about for 2-3 days!!! Sure glad I got out before Bart did the takeover.
Retired LEO

thanks bart for robbing public safety for the last 7 years

For the record, I have read indycorrupt because I read ALL local blogs.

Their post about the merger is wrong because that study was NOT done by the Mayor's office it was commissioned by the township folks.

And I was at the hearing where Stan Staley offered his testimony where he said police mergers are for efficiencies not savings, but you can get savings for fire mergers.

I have a life outside of the Internet and like to live it once in a while.

Carjackings are becoming a major problem. Only a few areas of the county are likely carjacking safe. I know two folks who have been carjacked at Castleton Sq. Mall. This is nothing more than the ghetto spreading further and further out from the inner core of the city. I see some of the apartment complexes up on 96th St. and Allisonville have the little HUD logo on the sign. A sure sign they are not offering Section 8 living. Section 8 living for young single mothers usually means high crime and trashy areas.

If Wal-mart ever built a Sam's Club in Greenfield next to the Wal-mart, I would much rather drive the extra five miles instead of hanging around the eastside. However, the east side Wal-mart is no longer the most ghetto. The newer Wal-mart up on Pendleton Pike and Sunnyside Rd. now claims that reward. I went in there a while back and I am _never_ going back. A friend who lives in the area says that Wal-mart is trash. Trash all over the parking lot, dirty dipers, groups of thugs, etc.. This was the Wal-mart where the younger group of thugs filled a shopping cart full of merchandise and just ran right out the door. There was a police chase and they crashed. They are building a Meijer just down the road. Those thugs pull that stuff in Hancock Co., they will get a wake-up call when they are taken to our county lock-up instead of the APC. We actually have something out here called bail and we actually give people jail time even if they take a plea.

"Their post about the merger is wrong because that study was NOT done by the Mayor's office it was commissioned by the township folks."

I had to go back and look twice at it, I don't see where they said it was the Mayors doing. What they did say is he knew about the lack of money to be saved, the fall out and pitfalls, then stood up and lied saying how much money it would save all of us. In reality, he "The Mayor" knew all along what he wanted to do, and that was to get his hands on more township money to bail out this bankrupt city.

At least that is what I seemed to get out of that posting, for the record I am very happy to see indycorrupt putting this information out there.

I guess some of us will read different things into it, it's certainly getting a lot of people talking about it.

The Mayor had the opportunity to read the reports...He ignored them.

How does that make IC wrong?

Staley also said during the hearings that he did not think the City benefited from the original UniGov...can you say bias?

I think we put up 4 different reports from varying sources of government and private practice, we didn't just list a single report. And we have another one that we could post over there, but I don't want to beat a dead horse.

I guess we could be wrong, I mean, we heard his lips move when he said the merger would save 20 million dollars.

But I digress, maybe he had his head in the sand after all.

Another Indy weekend and another seven shot, three dead.