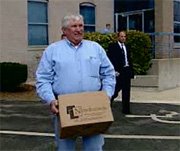 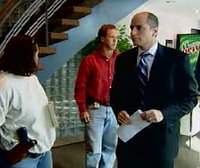 Investigators with the Marion County prosecutor's office served a search warrant at the office of the county coroner this morning.

About a half-dozen men and women, including Prosecutor Carl Brizzi, went into the office. They declined to comment on the search warrant, but said the office would issue a statement later today.

About a half-dozen men and women, including Prosecutor Carl Brizzi, went into the office.Brizzi said they were reviewing seven death investigations by the Marion County coroner.

Grand jury investigators served the search warrants because “there have been some questions about the integrity of record-keeping in the office.” He did not elaborate.

Coroner Kenneth Ackles was not at the morgue, 521 W. McCarty Street, during the sweep.

The prosecutor's office has had an ongoing investigation into the coroner's office over allegations of mismanagement. In a report written in February, a police detective said he found a lack of computer security that allowed nearly three-dozen employees to alter property receipts without detection. That lapse has raised concerns that evidence could be corrupted.

The memo, dated Feb. 9, also reported that several thousand dollars worth of county equipment was missing and concluded that the coroner's office, "at least on the administrative level, is incompetent and careless."

Not surprisingly, Coroner Kenneth Ackles, who earns a living as a chiropractor, was not around when the investigators arrived. Advance Indiana began writing about the crisis in Ackles' office earlier this month. When the Star first wrote about the mess, among other things, we asked about the missing property. The Star later confirmed the problem of missing property, as well as its botched efforts to notify the family of a missing man, who may have been murdered, and then cremating his body. Brizzi's office is alarmed by these discoveries because of their potential to compromise future prosecutions by his office. Brizzi's office reportedly backed up a truck at the coroner's office early this morning and hauled away a load of documents from the coroner's office.

WTHR adds to the intrigue, reporting that the prosecutor's office is looking into possible obstruction of justice charges. Ackles has been in hiding all day at his chiropractic office, but he issued this statement to WTHR late today: "We do not necessarily believe that any current employee of the Coroner's office has misplaced any personal items or property. If I find, or it is determined, that anyone in our office has been careless or violated the public trust in any way, they will be dealt with swiftly and appropriately." We do not "necessarily believe" that Ackles thinks his employees are innocent.
Posted by Gary R. Welsh at 11:08 AM

Center Township Trustee's office is next on the list. Has Wilson been assisting in any document shredding efforts over there?

Is both the Kenny "Bones" Ackles' office and Frank's office fixing murder cases?

And so it begins - the dismantling of the Democratic Machine!!

The sad truth is, if he resigns, Dem precinct committeepeople select his replacement. And then, the Center Twp. crew will have their paws in it big-time.

... considering I've been retired from Center Township for over 2 years now, any accusations about me shredding documents there is simply ignorant and stupid.

Does that mean any accustations about you shredding documents MORE than 2 years ago would not be ignorant and stupid ?

Wilson, you better take the Fifth on that one.

As Center Township Clerk, I never had to use a shredder on anything ... some folk are just way too paranoid and cynical. Sheesh!

Bags under your eyes?

Seriously, try being prosecutor, not a two-bit soap opera actor.

Hey, that's kind of sexist isn't it? The last time I saw Melina, she was wearing makeup. Only women can look good for the camera?

well, if you want your Prosecutor candidate to be tarted up like some twink ...

Just kidding! Brizzi with the right makeup could look very strong and manly!

(is this thread veering off into inanity?)

No, AI, it isn't sexist, what is shows is that Carl wasn't there for any reason other than news media.

Here's some useful info on advance search com which you might be looking for. The url is:
http://www.jaldisearch.com/