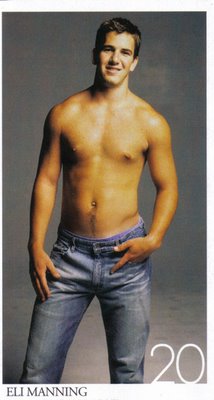 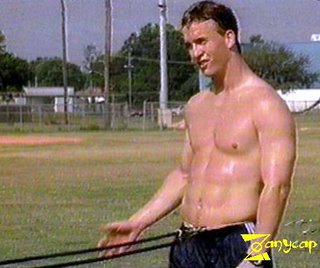 It will be the first time in NFL history that brothers have faced off against each other as starting quarterbacks. All eyes will be on the Colts' Peyton Manning and his younger brother, Giants' quarterback Eli Manning. Sports fans in Indiana have been talking about the face-off for the past six months. Coverage kicks off tonight on WTHR-TV at 7:00 p.m. The game between the Indianapolis Colts and New York Giants begins at 8:15 p.m.

The family recounts how Peyton and brother Cooper picked on the younger sibling a lot when he was growing up. Will this be pay back time for Eli? He does have the home field advantage. And brother Peyton has earned quite a unwanted reputation for choking in the big game. It should be fun to watch. By the way, what were the folks at ABC thinking when they scheduled its controversial "Path To 9/11" movie head-to-head with this game? Want a bet which scores higher in the ratings?
Posted by Gary R. Welsh at 10:54 AM

oh --- be still, my beating - heart! Your photo editor has such superb taste...

I have two words for you:

Wilson with your belly and ugly hair color...if the Manning boys were gay you wouldn't get a second look.

Let's try to be nice indyernie.

Ernie--who peed in your supper?

The Colts get the win 26-21, but Eli puts in a better game than Peyton. The Colts get the lucky breaks from a couple of critical calls that made a crucial difference in tonight's game. The Giants fans were not at all pleased with tonight's officiating, and I think they had good reason to be upset, particularly with the offensive pass interference call, which pretty much ended the Giants last scoring drive.

But in terms of getting screwed by officials' calls, the Colts have a loooooooong way to go to get to break-even.

Let's start with the league's "rewarding" of Indy's best-in-league record last year, with their sixth consecutive opener on the road.

As for the game....I vote for Warren Central's defense over the Colts. Pathetic.

This was a great ground offensive team we played, but that defense had better shore up, or we're in for a long season.

Oour running game was sad, but I liked the new addition...he's spunky and quick.

Hmm. Straight (I presume) guys with treasure trails . . . where'd they learn that?

I think they're just trying to be metrosexual Doug.