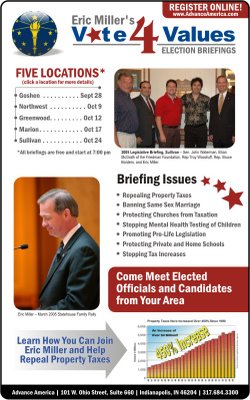 Advance America is a nonpartisan, tax-exempt, educational organization and as such does not endorse any candidate or political party. Or, at least that's what Advance America's website says. But we know better. A truly nonpartisan, tax-exempt organization would have no reason to provide "election briefings" to voters at fora at which you can only meet Republican candidates for the legislature.

Advance America founder Eric Miller is shown above in a photo with three Republican legislators, Sen. John Waterman (R), Rep. Troy Woodruff (R) and Rep. Bruce Borders (R). This series of election briefings Miller will be delivering in coming weeks is designed to energize the Christian right base of the Republican Party to help ensure Republicans maintain their slim majority in the Indiana House and their big advantage in the Indiana Senate. These briefings, along with the biased "Voter Guides" he distributes to more than 850,000 voters throughout Indiana, clearly demonstrate the partisan nature of his organization.

If the Internal Revenue Service properly enforced our nonprofit laws, Advance America would not be able to operate in this fashion. Miller's supporters are able to funnel large amounts of money through his phony nonprofit and take deductions on their tax returns for what amount to little more than campaign contributions. There's nothing nonpartisan or educational about his organization at all. For purposes of the organization's federal tax-exempt status, the organization is described as advocating "civil liberties". That's a bit of a misnomer considering that it seems to devote most of its time trying to figure out how to deny civil rights to Indiana's gays and lesbians and other minority groups Miller and his followers morally disapprove of. But hypocrisy is pretty much the trademark for Miller and his phony nonprofit.
Posted by Gary R. Welsh at 9:03 AM

Why does the IRS refuse to do their jobs and go after these groups. Does the religious right have total control over the IRS?

Apparently they are looking at the NAACP, but that's because they were anti-Bush. The IRS has investigated a few hundred of these groups in the past few years, and the IRS has concluded in an overwhelmingly number of the cases that these so-called nonprofits are violating the law.

after 2 years, the I.R.S. just dropped the proceedings against the NAACP last week ...

I get AA's materials, just so I can keep informed. It's frightening stuff.

I may make a complaint to my favorite Congressperson and ask her to check with IRS on this.

But, be honest--are there three goofier looking legislators around?
Elvis just screams "hick!"

Any idea if this would be an appropriate subject for a qui tam action against Advance America under the False Claims Act?

I too may speak to my favorite Congresslady who is not unacquainted with Eric Miller and his minions (and mignons). I assume AI would be glad to cooperate in preparing material to send to the appropriate IRS offices ?

The qui tam argument is a good one.

That's an interesting idea Doug. I haven't given it much thought. Someone might want to pander this course of action against the organization.

or as I should have said, "ponder"