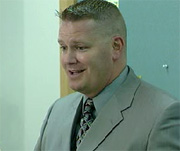 In an effort to limit the fallout from today's front-page news revelation that Marion County's newly-appointed juvenile justice administrator, Troy Hoppes, had touted a master's degree in psychology, which he purchased from a diploma mill that has since been shut down by the Federal Trade Commission, county court officials abruptly withdrew their offer this afternoon. WTHR reports:

The incoming director of the Marion County Juvenile Detention Center has told Eyewitness News that Marion County court officials have withdrawn their offer for the $80,000 position after learning his master's degree in psychology came from a diploma mill.

He was just announced as the center's new director a week ago.Troy Hoppes says he received a call Friday afternoon and was informed of the decision. In 2001, Hoppes says he enrolled in an online program at Ravenhurst University, where he participated in online chats as part of his curriculum. In less than a year, he received a master's degree.

"I'm not saying it was a challenging college because it wasn't. But I am saying that I completed what was required of me to obtain my degree," Hoppes said. "I paid the money and I got the transcripts and I got the diploma."

Marion County court officials were no doubt anxious to pull the plug on this guy during today's news cycle before even more damning revelations oozed out, calling into question the faulty process they undertook to find a new administrator for the troubled juvenile detention center. Here's what Robert Bingham, chief probation officer, had to say:

“It is important to maintain the public confidence that has been established with recent detention reform efforts, and thus the basis for the decision,” said Robert Bingham, chief Marion County probation officer who has been acting director of the juvenile detention center. “The court offered Mr. Hoppes an opportunity to verify and substantiate this online coursework for the master's degree that he presented to us as part of his academic credentials.

Although Hoppes had apparently told Marion Co. officials while he was being interviewed that he had earned his degree online, Bingham told reporters that the court system did not know that the school was not an accredited university. Nobody bothered to check it out.
Posted by Gary R. Welsh at 2:27 PM

Wow! I can't believe the decision-makers were able to move so quickly on this one. Maybe there is hope after all!