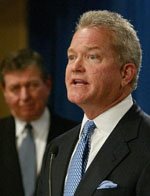 Rep. Mark Foley (R-FL) abruptly resigned his seat in Congress today after ABC News yesterday disclosed inappropriate, sexual e-mail exchanges he had with a 16-year-old male congressional page and other male pages under the age of 18. Foley asked the boy what he wanted for his birthday and asked him to send a photo of himself among other things. The boy who received the e-mails from Foley described them as sick. Foley, a closeted gay man, was outed last year by Blogactive.com because he voted against gay rights measures in Congress.

Although the e-mail exchanges, which were initially disclosed yesterday between Foley and the 16-year-old page, were relatively tame, he apparently made much more explicit statements in other Internet postings. ABC News reports that Foley resigned shortly after he was read more explicit postings he had made:

Blogactive.com has been alluding to Foley's interest in particularly young boys for some time now. In a statement, Foley said, "I am deeply sorry and I apologize for letting down my family and the people of Florida I have had the privilege to represent."Foley's departure from what had been a safe Republican seat will further complicate the Republicans struggle to hold their current 15-seat margin in the House.

Foley obviously had some serious issues. He never publicly admitted he was gay even after being outed by Blogactive.com. It is interesting to note that the age of consent in D.C. is 16 so Foley probably didn't break any laws. UPDATED: ABC News is now reporting that some lurid exchanges he had with under-age pages could get him prosecuted under a federal law he helped enact.

When I was in college, the congressman from my district in Illinois, Rep. Dan Crane (R) was caught having sex with a 16-year-old female page. While he could not be prosecuted in D.C., had he done the same thing in Illinois, he would have been prosecuted for statutory rape. Crane, the married father of seven young children, had campaigned on family values. I knew Dan very well at the time, having worked as a volunteer in his run for office in 1978. I was shocked by the disclosure at the time. He begged forgiveness from the district's voters, but he was narrowly defeated by his Democratic opponent in the next election. Ironically, Rep. Gerry Studds (D-MA) was caught at the same time having sex with a teen-aged male page. His district's voters re-elected him to several more terms in Congress. Both Crane and Studds were censured by the House for their actions.

UPDATE: Here's what Foley had to say about Clinton during the Moncia Lewinsky scandal: "It's vile," said Rep. Mark Foley, R-West Palm Beach. "It's more sad than anything else, to see someone with such potential throw it all down the drain because of a sexual addiction." And he would know. Speaker Dennis Hastert's mishandling of the Foley matter seems to be picking up traction now. House Majority Leader John Boehner tells the Washington Post that he knew about the problem last Spring and told Speaker Hastert about it. Boehner later claimed he wasn't sure if he told Hastert after Hastert's spokesman claimed he didn't know anything about it.
Posted by Gary R. Welsh at 4:05 PM

Foley didnt just go for pages. I went with our Congresslady to DC for that strange midnight GOP vote on Terry Schiavo. I was waiting in the House Cloakroom, enjoying seeing the various Congresscritters close-up. One walked by - gave me a piercing stare and then an up-and-down body scrutiny. I blinked and he went on by. Then I realized: that was evil Republican Mark Foley of the GOP Impeachment Panel. It was fairly well known he was gay - those rumors had torpedoed his possible Senate run...

Somehow I doubt that you're his type Wilson.

From ABC's The Blotter about Foley:

They say he used the screen name Maf54 on these messages provided to ABC News.

Maf54: You in your boxers, too?
Teen: Nope, just got home. I had a college interview that went late.
Maf54: Well, strip down and get relaxed.

The language gets much more graphic, too graphic to be broadcast, and at one point the congressman appears to be describing Internet sex.

Federal authorities say such messages could result in Foley's prosecution, under some of the same laws he helped to enact.

"Adds up to soliciting underage children for sex," said Brad Garrett, a former FBI agent and now an ABC News consultant. "And what it amounts to is serious both state and federal violations that could potentially get you a number of years."

from the SF Chronicle:

"The page worked for Rep. Rodney Alexander, R-La., who said Friday that when he learned of the e-mail exchanges 10 to 11 months ago, he called the teen's parents. Alexander told the Ruston Daily Leader, "We also notified the House leadership that there might be a potential problem," a reference to the House's Republican leaders.

Rep. Alexander learned of the messages 10-11 months ago, and reported them to leadership? Why did it take this long to expose Foley (no pun intended)?

Sounds like Hastert & Co. were going to try to withhold this until after the election, at least...maybe longer.

I have long pointed out that the first vote Eric Dickerson would take would be to select Denny Hastert as Speaker of the House. How long now will Hastert last? It seems Denny and the GOP House leadership have known for months about Foley but took no steps to protect pages or to remove Foley.

In many ways, Hastert is like an Archbishop with a 'problem priest' ...

That argument might work if Republicans were actually going to maintain control of the House. As it stands today, even if Dickerson upset Carson, Republicans will lose so many seats elewhere that Democrats will easily recapture control of the House. Of course, the flip side of that argument is that, if Dickerson wins, he can accomplish more things for the district if the Republicans maintain control. As it stands, only Lugar's and Bayh's office makes things happen for Indianapolis in terms of bringing home the dollars, with help from the neighboring Republicans, such as Buyer, Pence or Burton.

Sorry AI, it is not true that Congresswoman Carson does not direct substantial federal dollars to her district.

It's a matter of public record.

ED was posting 'anonymously' on TDW where he was asserting that Indianapolis was the 12th largest District but in the bottom 3% of Federal dollars. I repeatedly asked him to produce a source for that info. He simply couldnt back up his talk with a source. Sounds like a patented "Jocelyn MSU" (Making Shit Up).

Later, I found the Census CFFR (Consolidated Federal Funds Report) which didnt have data by District. I even called up the 'author' at the Census Bureau - he knew of no way to get a breakdown by District!

both Buyer and Burton have constituents in Indianapolis who deserve representation too ...

for that matter : you assert that Carson doesnt bring home the dollars for Indpls : do you have any figures to back that up or is it just Dickerson Campaign Rhetoric?

btw, those pseudonymous colloquies with ED on TDW were immensely informative - he was doing repeated Julia-smearing too despite his public protestations of purity...

The fact that you are not able to tick off the list of projects she was responsible for obtaining federal funding is quite telling.

Well, to give credit where it's due...

I am aware of fed transportation dollars flowing into IndyGo's coffers. Also money to the metro area Mass Transit study, and research dollars to IU School of Medicine. And, dollars to Ft. Ben, where the commissary is being torn down, relocated for a new Lawrence City Center.

To remain fair, it must be pointed out, that under Govs. Bayh, O'Bannon, Kernan and Daniels, lobbyists were retained in DC to earmark money for the entire state.

To be honest, JC's cerdibility in DC is remarkably low...her office is involved in only a few cleanup details in the above-stated matters.

Anon4:45: it's admirable that you assert your 'honesty' in claiming that you know for certain that Congresswoman Carson's 'credibility in DC is remarkably low". However, could you give us valid support for such a statement?

You are correct that the Congresswoman has directed substantial federal dollars to her district, a few instances of which you point out.

We shouldn't forget the significant amount of money she brought back and which upset the neighborhood around the Children's Museum. I can't remember the details.

As for the lobbyist, it's always a good idea to have people on the ground to help our members get our fair share of federal money, lest it end up in Alaska!

The GOP Leadership position on Foley seems to be that nobody could anticipate a breach in the Levi's ...