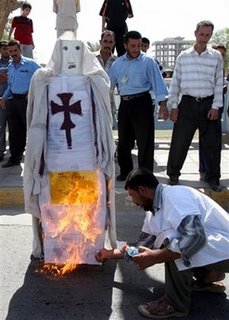 When I first heard that Pope Benedict XVI had made some off-hand comments about the Islamic prophet Muhammed being "evil and inhuman", I thought to myself, how could he be so foolish to make such comments in today's heated atmosphere between Muslims and people of Christian and Jewish faith. Then I did what any informed person should do. I looked for the text of the words he spoke to be put them into context. He delivered the controversial words during a speech at the University of Regensburg, entitled Faith, Reason and the University: Memories and Reflections. Urging his audience to "raise the question of God through the use of reason, and to do so within the tradition of the Christian faith", the Pope said:

I was reminded of all this recently, when I read the edition by Professor Theodore Khoury (Münster) of part of the dialogue carried on - perhaps in 1391 in the winter
barracks near Ankara - by the erudite Byzantine emperor Manuel II Paleologus and an educated Persian on the subject of Christianity and Islam, and the truth of both. It was presumably the emperor himself who set down this dialogue, during the siege of Constantinople between 1394 and 1402; and this would explain why his arguments are given in greater detail than those of his Persian interlocutor. The dialogue ranges widely over the structures of faith contained in the Bible and in the Qur'an, and deals especially with the image of God and of man, while necessarily returning repeatedly to the relationship between - as they were called - three "Laws" or "rules of life": the Old Testament, the New Testament and the Qur'an. It is not my intention to discuss this question in the present lecture; here I would like to discuss only one point - itself rather marginal to the dialogue as a whole - which, in the context of the issue of "faith and reason", I found interesting and which can serve as the starting-point for my reflections on this issue.

In the seventh conversation edited by Professor Khoury, the emperor touches on the theme of the holy war. The emperor must have known that surah 2, 256 reads: "There is no compulsion in religion". According to the experts, this is one of the suras of the early period, when Mohammed was still powerless and under threat. But naturally the emperor also knew the instructions, developed later and recorded in the Qur'an, concerning holy war. Without descending to details, such as the difference in treatment accorded to those who have the "Book" and the "infidels", he addresses his interlocutor with a startling brusqueness on the central question about the relationship between religion and violence in general, saying: "Show me just what Mohammed brought that was new, and there you will find things only evil and inhuman, such as his command to spread by the sword the faith he preached". The emperor, after having expressed himself so forcefully, goes on to explain in detail the reasons why spreading the faith through violence is something unreasonable. Violence is incompatible with the nature of God and the nature of the soul. "God", he says, "is not pleased by blood - and not acting reasonably is contrary to God's nature. Faith is born of the soul, not the body. Whoever would lead someone to faith needs the ability to speak well and to reason properly, without violence and threats... To convince a reasonable soul, one does not need a strong arm, or weapons of any kind, or any other means of threatening a person with death...".

The decisive statement in this argument against violent conversion is this: not to act in accordance with reason is contrary to God's nature. The editor, Theodore Khoury, observes: For the emperor, as a Byzantine shaped by Greek philosophy, this statement is self-evident. But for Muslim teaching, God is absolutely transcendent. His will is not bound up with any of our categories, even that of rationality. Here Khoury quotes a work of the noted French Islamist R. Arnaldez, who points out that Ibn Hazn went so far as to state that God is not bound even by his own word, and that nothing would oblige him to reveal the truth to us. Were it God's will, we would even have to practise idolatry . . .

I don't want to oversimplify the Pope's message here, but to me he is essentially communicating that one should not spread the message of their faith by the use of the sword. Spreading the word of God through violence is unreasonable and not according to God's nature the Pope is telling us. Indeed, moderate Muslims profess to hold these same beliefs. So why does the Pope owe anyone in the Muslim faith an apology for speaking the truth according to the convictions of his religious beliefs, and in accordance with the teachings of Judaism and mainstream Islamism? For his part, the Pope bowed to pressure and issued an apology, which is thought to be the first such statement in papal history:

I am deeply sorry for the reactions in some countries to a few passages of my address at the University of Regensburg, which were considered offensive to the sensibility of Muslims. These in fact were a quotation from a medieval text, which do not in any way express my personal thought. I hope this serves to appease hearts and to clarify the true meaning of my address.

Unfortunately, the reaction from much of the Muslim community throughout the world is only validating the interpretation of the Pope's remarks that they profess to find offensive. Here's a sample of what's being said:

Worse than these war of words is the acts of violence which have already been committed against symbols of the Catholic church by Islamic extremists. A nun was shot dead in Somalia by Islamic gunmen and churches have come under attack in Palestine.

If the Pope owes anyone an apology, it is the child sex abuse victims and their families who have been subjected to unwanted and unforgettable abuse at the hands of priests who have violated the trust bestowed upon them by the Catholic Church. The Pope ownes no apology to people of Muslim faith. On this point, he speaks the truth.

Organized religion has such a hold on so many people in our world, and certainly in Indianapolis. Clearly I will be ripped to shreds for saying the following, but I believe it deep in my heart:

If only it were possible to totally eliminate organized religion from the face of the earth for at least three generations, we could eliminate much of the hatred and violence from the earth.

A sad incident all the way around.

But the Holy Father needs to learn how to do a true apology.

And the offended Muslims need to get a life, and realize people can misspeak or be misunderstood. It happens.

That being said, this Pope is a lot less personable than his predecessor.

Since when do all people of the world have to be careful not to offend those barbarians who hide behind their convoluted interpretation of Islam?

Do you work for the Bush White House? You should, jumping to those kinds of conclusions.

You're gonna hurt yourself reaching so hard.

Be sure to know your history and see what organized religion has brought you: education, the university system, science and the arts. Humans do dreadful things and without love for God and neighbors there would be a greater chaos and disorder in the world as is evidenced by the epidemic STD's in our love starved,broken-familied teens in America.
With regards to 9/11 and terrorists, the connection is violence coupled by the complete disregard for the salvation of our neighbors - a complete lack of care or concern and a selfish, prideful, self-righteous hateful philosophy when lived in any century that would use violence to coerce others to believe as one group of people deem necessary. God allows freedom but provides the rules and boundaries. When folks choose not abide in God,the consequences are eternal. However, check the Scriptures: God is the giver and taker of life. WE are NOT GOD, gods or godesses.The Pope's point: use our God given gift of reason to think,discuss, decide and act lovingly in virtue, modesty in dress and attitude, with compassion and discipline, unselfishly giving to one another's well being.