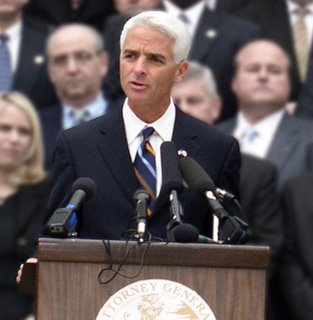 Crist, an attractive and unmarried man, has been plagued by rumors spread by his political opponents that he is gay. He answers the question, "I'm not." After Crist was endorsed by a gay news publication, Gallagher called on him to disavow the endorsement. Crist would not. Gallagher blanketed the airwaves with ads saying "Crist is pro-choice, favors a liberal spending plan and supports gay civil unions." Florida Republicans have now spoken, and they've rejected the far right's attempt to use these divisive wedge issues for politican gain. Indiana Republicans, take notice.

And there's yet more good news tonight from Florida's Republican primary. Christian right extremist Randall Terry has been defeated by a two-to-one margin in his attempt to unseat State Sen. James King, Jr. Terry's campaign made national news recently after his gay son complained that he and one of his sisters, who had given birth to a child out-of-wedlock, were not included in the family photo and had been shut out by Terry, who ran on a platform of "family values." He argued that his opponent had not been sufficiently conservative and pro-family because he didn't go along with the Christian right's agenda in the Terri Schiavo right to die case. I guess Florida voters weren't buying his hypocrisy.
Posted by Gary R. Welsh at 8:15 PM

Does either really have a chance against Smith or Davis, the two top Dem candidates? Conventional wisdom says no, especially on a (GOP) ticket that will be headed by Katherine Harris, she of 2000 election stealing fame. Watch people run from her. Her own president didn't want her to run.

Most smart politicos I know in Fla. think it's going to be a strong Dem year.

That being said, Crist is a looker...

That kind of dead weight at the top is hard to overcome.

The two Dems are relative unknowns compared to Crist. I think Crist is the definite favorite. The Republicans couldn't have beat Nelson in the Senate race with a good candidate. Harris' presence will have no impact on Crist's chances.

Referring to 10:20 PM ... it's obvious the Left is a bunch of sore losers. Think I'm wrong? Look at Mexico - the right-wing candidate won by the narrowest of margins and the left-wingnut is threatening to incite anything from a revolution to a staging a coup. "I will rule from the streets" said the losing candidate. And to think we have this sieve of a border between us and them?

Even when Harris does win in Florida the Left will claim "stolen election" and yet when we complain about voter fraud and advocate for voter ID - you claim "prove it!" ... can't have it both ways Liberals.