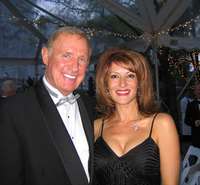 Rep. Dan Burton (R) and his new wife, Dr. Samia E. Tawil, are the Talk of The Town according to the Star's Susan Guyett. She writes:

The congressman and his new wife tied the knot Aug. 22 in Park City, Utah, but are planning a religious service in Indianapolis in November.

It sounds like the second ceremony is for family.

"My parents are Greek Orthodox, and there's no way -- we have to have the church wedding," Tawil said.

The couple, looking very much in love, attended the Indianapolis Symphony Orchestra gala Sunday night. Burton, 68, said they hadn't planned any public announcement on their marriage until the fall nuptials took place.

Tawil, an internist, cared for Burton's wife, Barbara, who died in 2002 after battling breast and colon cancer. The physician, who is 44, got to know the family and remembers Burton as a caring husband who was helpful to his wife during her illness.

Their paths didn't cross again until last year when Burton's daughter, Danielle, learned Tawil got divorced. She suggested her father give the doctor a call.

They had lunch, and the rest is history, Tawil said during a phone interview Tuesday from her medical practice in Geist. She's just getting used to life married to a public figure and is astounded how many people approach him in public with questions and requests for help.

"He's very honest, he's very loyal, and his job is number one," she said. She plans to maintain her full-time medical practice.

AI wonders just how well Tawil knows Danny Boy. She describes him as being "very honest" and "very loyal." I don't know what other people might think about this, but in my family men who cheat on their wives aren't considered honest or loyal. But that's exactly what Burton did to his first wife when he carried on an extra-marital affair with a State House secretary which produced a love child. In Burton's words: "There was a relationship many years ago from which a child was produced. I am the father. With my wife's knowledge, I have fulfilled my responsibilities as the father. In an effort to protect the privacy of those involved, it was decided years ago among all parties that this matter would remain private."

When Burton made that little disclosure in 1998, his son was 15 and he admitted that he had never met him. And that's fulfilling his responsibilities as a father? Gee, I'm glad Danny Boy isn't my father. Remember, Burton once called President Clinton a "scumbag" because of his extra-marital relationship with White House intern Monica Lewinsky. People who live in glass houses?

Tawil explains that she met Burton while caring for his wife, who was at the time dying of breast and colon cancer, and that he decided to call her up after he learned she was getting a divorce. For someone who spends a lot of time trying to legislate morality, Burton practices a form of "Christian values" that are completely at odds with what I was taught by my parents and the church I attended growing up.
Posted by Gary R. Welsh at 9:21 PM

When I saw this in the paper, I guess I was happy for Dan. He endured much as his wife was ill and died. But then I read it again--his wife's doctor? 20 years hius junior?

How can anyone ignore what his late wife endured, as this philanderer partied all over town for 30 years? I'm personally aware of one woman he hit on constantly. The stories are legendary.

And his antics in the past--shooting a pumpkin in his backyard to "investigate" Vince Foster's suicide--are the soruce of much giggles in DC.

Here's what happens when a political party can't muster proper support for a slated (good) candidate in a primary, and a boob wins. And wins, over and over again, in one of the most Republican districts in the nation.

And now he's married his wife's doctor. And he gets good press for it.

It could only happen in a town where the symphony's home is named for a man whose wife jumped out of a cake at his son's bachelor party.

speaking of jumping out of cakes.....did Danny boy pay for his new bride's boobs?

Dan Burton is an idiot, and I've heard that he's STILL trying to drag Bill Clinton's name through the mud (I guess the Monica moments were Burton's 15 minutes of fame and he's not letting it go easily).

And I find it a little bit humorous that Burton represents Fishers... where image is everything. You'd think they'd want a Congressman who was a little bit less of an embarrassment.

Fishers is almost entirely neuvo-riche. Alumninum village. They may not remember, or, frankly, care about Danny boy's Statehouse and other philandering.

He left his Statehouse brain to his brother.

I hope she got a pre-nup.

Danny Boy did win the George Hamilton Cocoa Butter Open last year. Defending champs can't return to defend their title without a big-breasted woman on their arm. All the better if she's your wife.

They want their bib boog fettish and their big hair back. Tease it, baby....

unless she picks her nose LOL

brizzi is burton's protege. in more ways than one

What do you mean Brizzi is Burton's protege in more ways than one? Did I miss a news item somewhere?

Congratulations to Dan and Dr. Samia, she seems like a nice person. (leave her alone, and dont pick on her)

I have known Dr. Samia Tawil for years. As and Arab-American women,her achievements and accomplishments are outstanding.She came from a hard working family, read more than a thousand books by the age of 13...she had got the best score in high school and earned the privilege to attend medical school in Damascus, Syria..and left to Paris, France for higher medical education...She moved to the USA and continued working hard and has established a succeful practice ...Her patients love her for her compassion and understanding...
She speaks Arabic, French and English. She is beautiful and intelligent. We are so proud of you Dr. Samia...It is time to enjoy life and shine more.
Senator Dan is so lucky to have her in his life... I guess it takes one to know one....It is never too late to find happiness and spread joy and peace.
May the Lord Jesus bless your marriage.

Wether Mr Burton is a public figure or not, his personal life is his own and no one should bother with who he married and wether she had plastic surgery for whatever or not. Biggetry does not serve any purpose in this life. Whatever the circumstances were, Dr Samia Tawil is now Mr Burton's wife and should earn the respect any human being is deserving of. If there is someone who is jealous of Dr Tawil or does not like what she has accomplished on a professional or personal level, they should not try to attack her and her new husband on a personal level. Live and let live. Let them enjoy their marriage. Any man should be proud to have a great woman with so many accomplishments as Dr Tawil. Go Dan.. The best to both of you and many happy years together...

Congrats to Anonymous 4:09PM EST - you have written the most absurd Blog post I have ever had the good fortune of reading.

Dr. Tawil may be a good, or even great person - but who really cares that she read 1,000 books by the age of 13. What a bizarre fact to use to prove her self-worth - and - how could one know or prove such a fact. Truly unbelievable.

I think the point you are all missing is the fact that Congressman Burton's children were the ones who encouraged him to pursue Dr. Tawil. If that's not a true testament to her character, I don't know what is. Instead of attacking this couple, you might look at all the wonderful things the two of them have done for others over the years.


Karma is a funny thing...... I know I'll be watching !
and "New" Mrs Burton, if he's had affairs in the past, do you really think an old dog learns new tricks? Shame on you both, there is a 14 yr old boy out there, that thankfully will never have to know the sleazy and sorted truth of being the outcome of just 1 of the numerous affairs he has had, he even gives Christians a bad name.
Mr. Burton, you Sir are known as a letch - and once a letch - Always a letch
you deserve whatever karma deals to you and your "trophy" wife.