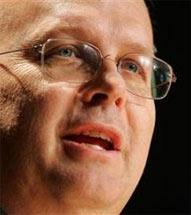 A new book written by two Texas journalists about President Bush's top political advisor, Karl Rove, reveals that his stepfather led an openly gay life after divorcing Rove's mother. In fact, Rove was plotting how to the use ballot initiatives on anti-gay bigoted marriage amendments as a way of boosting the re-election efforts of Bush as his father lay dying in his Palm Springs, California home.

The book, The Architect, was written by James Moore, an Austin-based journalist, and Wayne Slater, senior political writer for The Dallas Morning News. The Austin Statesman takes an advance look at the new book in its paper today. James Henson writes of Rove's gay stepfather:

In Chapter 9, "A Few Simple Questions: What's in Karl's Closet?," the authors draw on interviews with gay acquaintances of Rove's stepfather, Louis Rove, as well as an interview with a circumspect Karl Rove, to reveal that Louis was openly gay after getting divorced from Rove's mother. The chapter jabs hard at Rove, pointing out that Louis Rove, who was clearly Rove's primary father figure, died in Palm Springs just as "his son was in the midst of launching the antigay issues campaign that was to lead to the re-election of George W. Bush."

The authors quote Rove and friends of Rove's stepfather to illustrate that Rove was close to him throughout his life, and seemed not to judge his sexuality. This, and Rove's self-professed agnosticism, are major exhibits in Moore and Slater's claim of hypocrisy. It's hard not to wince at the invocation of such intensely personal material, but it's a testament to the politics that Rove has helped create that it doesn't seem out of bounds.

What is particularly disturbing about this revelation is the fact that Rove grew up believing his stepfather was his real father. He only learned he was his stepfather after his parents divorced when he was a young adult according to a report tonight on the Raw Story. It has been speculated that Rove's mother committed suicide after learning of her former husband's homosexuality. Rove is less circumspect according to the Raw Story report, which says:

A self-admitted agnostic, Rove has to date portrayed his parent's divorce and mother's subsequent death as something of a mystery.

"It's hard to figure out," Rove told Time Magazine in 2004. "You can speculate on what demons she just wasn't able to overcome, but she couldn't."

One might think that such a sensitive family situation might have kept Rove from using it as a political ace-in-the-hole. Instead, Rove made sexual orientation -- specifically, gay marriage -- the centerpiece of a presidential campaign aimed at getting out conservative voters in states like Ohio.

In addition to Rove's gay stepfather, the book also takes on the hypocrisy of a number of prominent conservative Republicans who are rumored themselves to be gay, creating a lot of "advance buzz" for the book according to Henson. He writes:

Chapter 5, "Not as I Say: Gay in the GOP," discusses prominent conservatives who have been rumored to be gay and declined to confirm or deny the charge; particular attention is paid to Republican National Committee chairman Ken Mehlman. The subject has already been grist for blogs and gay publications, but it has been handled gingerly and rarely in the mainstream media. Moore and Slater take care not to apply labels or draw clear conclusions, instead reporting on the reporting of others. They seem to conclude — reasonably, I think — that because Republicans have made gay identity a national issue, reporting such ambiguity is fair.

The book looks to be a must read for political junkies. It pretty much confirms my earlier opinion of Rove. I've previously written about Rove's famous penchant for using whispering campaigns about an opposing candidate's alleged homosexuality in an attempt to discredit them. The guy would and did throw his own stepfather under the bus for political gain ala another famous Texas politician, Lyndon Baines Johnson. Rove himself has long been rumored to be gay much to his chagrin.

And there's one additional bit of bad news for Rove in the new book. Rove had secret street-corner meetings with disgraced lobbyist Jack Abramoff to avoid creating a paper trail in the White House log of their meetings the authors report. Looking forward to getting my hands on a copy of this book.
Posted by Gary R. Welsh at 6:55 PM

Wait a minute--he's the son of a gay man AND he's agnostic?

I had heard the gay dad rumors before. And I suppose I should've paid attention to the agnostic thing...

If it's true, this pathetic human being brings hypocracy to a new level.

The more I read this post and think about it, AI, the madder I get.

Bush himself is bas enough. But his henchmen are hell. And Rove turns out to be a screaming homophobe.

Off with their heads.