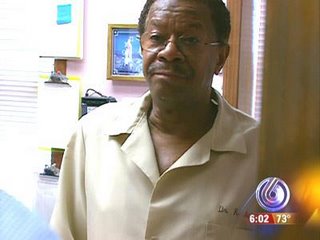 After hiding in his chiropractic office all day, Ackles finally opened his door to tell WRTV that the search warrant Marion Co. Prosecutor Carl Brizzi served on his office today was "unnecessary", and that he thought Brizzi was politicizing matters in his office. Ackles attempted to deflect attention away from the investigation of his office's conduct by shifting the discussion to the accidental deaths of the infants and Brizzi's intention to examine those deaths. WRTV reports:

The Marion County coroner on Tuesday criticized the county prosecutor's decision to obtain and serve a search warrant at the coroner's office, saying he already was cooperating with the prosecutor's probe into possible mismanagement of bodies, records and property.

Prosecutor Carl Brizzi, accompanied by his investigators, delivered the search warrant to the coroner's office Tuesday. A grand jury is looking into seven cases, including one in which the coroner's office identified a body but failed to tell his family or police. The dead man's family reported him missing, but they said they didn't learn about his death until after the coroner's office had a funeral home cremate the body.

Brizzi also wants a review of the cases of three premature infants who died this month from overdoses of an anti-clotting drug administered at Methodist Hospital.
The coroner's office deemed those deaths to be accidental.

The investigators accompanying Brizzi seized records from the coroner's office. Afterward, Coroner Kenneth Ackles said in a news release that he was surprised that Brizzi had used a search warrant.

"This process, we felt, was unnecessary, especially in light of our office turning over file materials whenever requested by members of law enforcement agencies," Ackles said. Ackles also addressed the cases of the three infants and implied that they were being turned into a "political issue."

"Based upon our review of the infants, medical records (and) investigations, we agreed that the death was accidental," Ackles said. "We routinely rely upon physicians to determine the cause of death in hospital settings. We do not believe that the deaths of three young children should become a political issue."

Brizzi said he has been examining issues relating to the coroner's office for at least five weeks. Before Ackles' statement was released, Brizzi talked about why he sought the search warrant. "There have been allegations about the mishandling of bodies, missing documents (and) missing cash," Brizzi said. "As opposed to doing a regular subpoena, because of the nature of those allegations, because there are missing documents, we thought that the search warrant was the best way to get the documents that we need and preserve the integrity of the investigation." Among the issues being examined by the grand jury are allegations that more than $3,000 in cash and property belonging to a deceased man was stolen.

Brizzi indicates that his office launched the investigation about 5 weeks ago according to this report, which would be the last week of August.

UPDATED: The Star's Brendan O'Shaughnessy, who has been doing a great job getting the facts out about the ongoing scandal in the coroner's office, sees his page one story relegated to the back-page of the Metro-State section today. Hmmm. His article also depicts Ackles as trying to deflect attention away from the problems in his office by criticizing Brizzi for politicizing the matter by serving a search warrant on his office. In particular, Brizzi has reason to question the motives of the coroner's office, particularly with respect to the death of Carl Southern. That's the case where the coroner's office failed to notify Southern's family or police after it identified him; instead it cremated his body. On this matter, O'Shaughnessy writes:

"These are serious allegations about mishandling of bodies and documents," Brizzi said. "This body could have been the city's 117th homicide (this year). We don't know, because we never got a chance to do an autopsy."

Brizzi said his investigation has been in the works for about five weeks. Details about the investigation were first reported earlier this month after it was learned that money stolen from Wright's body in October led a police detective to question the security of evidence and property at the coroner's office.

Interestingly, the Star seemed more determined to give equal coverage to a press conference by Democratic candidate Melina Kennedy charging that the prosecutor's office's mishandling of a case last year led to another murder in the city. You can read the facts for yourself, but I think the facts in this case do not support Kennedy's claim in the least bit. More evidence needed to be acquired in the case in order to hold the accused in jail--it's called due process.

Meanwhile, Sen. Pat Miller tells O'Shaughnessy that she will try to pass legislation next year to increase training requirements and their employees. There is little she can do, however, because the Indiana Constitution dictates the qualifications for the coroner, which allows just about anyone living and breathing to hold the office.
Posted by Gary R. Welsh at 8:01 PM

Hmm.. maybe THIS is the case for a NECESSARY Constitutional Amendment in which coroners have to be doctors-- or abolishing the position in favor of medical examiners for each county. Or are we still interested in continuing the unnecessary layers of government (see township trustee/ assessor.. etc.) which in this case lead to incompetence, cronyisim and out right fraud.

Well, let's all look on the bright side of all this. If Ackles continues as coroner, the bodies will at least look relaxed and have good posture in their coffins :)

This was a publicity stunt for Brizzi, but it wasn't like the coroner's office didn't deserve it. With all the mismanagement, I think Ackles is more perturbed that somebody very publicly got one over on him. There are some people that want to see the facts of this scandal see the light of day faster than he can cremate them.

I'm with Abdul... since when did Indy turn into scandal city? I mean, the sinful side of me loves the gossip, but the practical side of me wishes this would get cleaned up so we can move on.

Why was Carl wearing MAKEUP?

Seriously. I want an answer.

Unless it is because he just sits in his fancy office putting on his rouge and lipstick...

Jeez, he's more of a sleez than I thought.

I saw it on TV and thought the same thing, but I'll give him the benefit of the doubt. If he's already cheezy enough to serve the warrants personally, I doubt you can shame him.

"Ready for my closeup, Mr. DeMille!"

Yes, mismanagement, but when is Carl going to serve warrant's on Carl Dumber, I mean Drummer?

The ignorant comments about Brizzi
are ignorant and take up space..Kind of like the people we have on City Council, Mayors office,Trustee's office and oh yes,
let's not forget about Congress. Any of you empty heads need a job.
come on people,we have serious,serious problems in our county. Use your talents to find
out about a person and then help to
put our county back on track. I
do appreciate the humor from most
of the comments but unnecessary ridicule is ignorance.Brizzi doesn't have to grandstand, all he had to do was his job and he did,
As he said, it was out of respect
from one elected official to another. But what would Ackles know
of that..it's easier to criticize.

If it was for Dr. Ackles, how come he WORE MAKEUP? And brought the media with him?

How do any of you know Brizzi wore makeup unless you were there when the search warrant was served because you work for the coroner? I'm frankly more concerned about what the folks in the office are doing or not doing than how Brizzi dresses or whether he wears makeup. I've noticed quite a few Democratic male politicians who appear pretty made up as well when I see them around town, but I don't hear any of you criticizing them.

I think Ackles needs to resign his post and take his Chief Deputy with him. There is still time to escape before those obstruction of justice charges catch up with them. I hear the Bahamas are beautiful this time of year. They need to do us all a favor and take a permanent vacation.