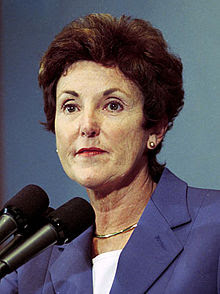 She's one of those consummate bureaucrats and political insiders who always seems to land on her feet no matter how badly she performs in her job. She also is a master of leveraging her high-level government jobs for well-paid jobs in the private sector no matter how smelly it looks. Meet Jane Garvey, the chairman of Meridiam Infrastructure of North America, who is currently pimping for her masters across the big pond in France who want Indianapolis taxpayers to entrust them to build, operate and manage the proposed $1.75 billion criminal justice center for which Mayor Greg Ballard is seeking approval as his final foray in auctioning off every public asset that is not nailed down.

Garvey is a teacher by training, but she first cut her teeth in the big leagues in Massachusetts where she served in two substantial roles as Director of Logan International Airport and Commissioner of the Massachusetts Department of Public Works. During her tenure in the latter, she supervised one of the nation's largest public works boondoggle in history. That would be the infamous Big Dig, the 3.5 mile tunnel that was supposed to cost $2.8 billion but wound up costing taxpayers over $14.6 billion. Despite that colossal failure, Garvey went on to become Administrator of the Federal Highway Administration. Garvey takes credit for the FHA's Innovative Finance Initiative, which paved the way for federal highway dollars to be used for public-private agreements ("P3") by allowing private invested dollars to count as a local match for federal highway dollars. Garvey's current employer, Meridiam, has specifically benefited from that initiative. Some of these privately-funded highway projects have gone bankrupt, leaving taxpayers holding the bag, such as the San Diego South Expressway project. Federal highway authorities gave up on efforts to collect $80 million in pilfered funds from the bankrupt company.

Garvey is best known for her role as Administrator of the Federal Aviation Authority, a post to which former President Bill Clinton appointed her. She became not only the first woman but also the first non-licensed pilot to run the FAA. Garvey's role running the FAA at the time of 9/11 has been the subject of much interest since that role placed her at the center of airport security. The 9/11 Commission Report criticized her for being "unaware of a great amount of hijacking threat information from her own intelligence unit, which, in turn, was not deeply involved in the agency's policymaking process." Both American Airlines Flight 11 and United Airlines Flight 175, which were flown into the World Trade Center, were boarded by terrorists at the airport Garvey formerly ran, Boston Logan, many attribute to lack of airport security.

On September 11, 2001, arrangements had been made for more than 2,000 senior airport administrators to be gathered in Montreal at an aviation conference, some say by design. Air traffic controllers were confused when the first reports of hijackings where brought to their attention because of the concurrent Global Guardian exercise being conducted by U.S. Strategic Command, Air Force Space Command and NORAD to test U.S. air defenses on 9/11. A phantom flight 11 was being used in the exercise at the same time the real Flight 11 was reported hijacked. Conspiracy theorists, including retired United Airlines pilot Field McConnell, contend Garvey played a key role in making the events of 9/11 possible. They point, in particular, to the Clinton administration's decision in 1994 to contract out the management and operation of 52 FAA control tower centers to a British company, SERCO, making it possible for a "man-in-the-middle" attack. Conspiracy theorists allege the piloted Boeing jets were hijacked remotely, not by terrorists on board the planes, and turned into decoy and drone maneuvers.

Whatever Garvey did or did not do correctly as FAA Administrator, she managed to escape any blame for 9/11 but was able to successfully leverage her job to become a multi-millionaire in the private sector. Major airlines received about $5 billion in direct payments from the government to assist them in recovering financially from 9/11, including United Airlines, which lost two of the hijacked planes. After leaving the government, Garvey became a board director for United Airlines. That's just one of many corporate boards on which she has served, including Sentient Jet, Inc, SpectraSensors, Inc., Advance Navigation & Positioning Corporation, Bombardier Aerospace and Metron Aviation, among others. She's brought others from the government along with her. Former Transportation Secretary Ray LaHood has joined her at Meridiam as an adviser in helping push P3 highway projects.

Garvey and another Meridian employee, John Dionisio, were interviewed today by WIBC radio talk show host, Abdul-Hakim Shabazz, someone the Ballard administration could rely upon to roll over and ask nothing but puff ball questions. Garvey made the astonishing claim during that interview that the 35-year deal with her company is not privatization. Either she doesn't understand what a public-private agreement is or she's just a bald-faced liar, take your pick. She claimed the P3 model "gives the public sector more control over the project." Hah. She says her company will be penalized if the performance matrix established by the City aren't met, although she didn't specify what those penalty provisions would entail. Garvey says Meridiam is "drawn to projects that transcend politics" and that her company is looking for "the opportunity to improve the fabric of the community." "This is a team that sees itself as a part of this community," she said. "This is a hallmark of the work we've done in other communities." She says that whatever her team builds, it will be in at least as good of condition when it turns the keys over to the city in 35 years as the day it opens. And I have a bridge in Brooklyn to sell you.

Garvey's sidekick, Dionisio, says he's now living in Indianapolis full-time. Dionisio emphasized the Meridiam-led team came in below the city's affordability limit of $50 million, a figure at which we still have no idea was arrived. What we know is that the size of the project was scaled back considerably by not including office space for the prosecutors and public defenders or the juvenile court and juvenile detention center as originally required when the administration first put the project out for bid a year ago. Dionisio emphasized that their construction plans allowed for future expansion at the site by adding those facilities, as well as the civil courts and other public safety-related agencies.

Dionosio bragged about one of its partners, Cofely Services, the French company that will be contracted to manage the facility during the 35-year term of the P3 agreement. Dionosio made no mention of my recent report on Cofely's entanglement in one of Spain's biggest public corruption scandals in which bribes were allegedly paid to dozens of local officials, including mayors, for public projects that primarily benefited Cofely. Dionosio also bragged about the involvement of Walsh Construction, former Chicago Mayor Richard Daley's go-to construction company, and its local subcontractor, Hagerman Group. He also claimed a vote on the proposal would be taken by the City-County Council on March 2, which is contrary to public statements made by the Democratic leaders of the council, who say they are holding up approval of the proposal until more information is furnished on not only this proposal but also the controversial Regional Operations Center. Not surprisingly, neither Garvey nor Dionosio addressed allegations made by Democratic mayoral candidate Larry Vaughn at Monday night's City-County Council meeting that ten members of the council had been paid $10,000 bribes in the form of annuities in exchange for their vote in favor of the project.
Posted by Gary R. Welsh at 12:25 AM

Absolutely jaw-dropping reportage- the likes we will never see in the Gannett owned garbage can liner known as The Indianapolis Star nor on any local airwaves more populated by non-sense feel-good spots than anything approaching real news.

This Garvey gal sure seems typical of modern day politics and governance. How many Republican AND Democrat politicos and political hatchmen and their husbands/wives become vastly wealthy and attain pseudo-elected seats of power through crony insider-ism? I'd guess... MOST.

I was in Boston during the Big Dig and I can tell you this corrupt Garvey was so far in over her head [no pun intended] it was unreal. We don't need more Garvey goofs here. Sadly... it sure seems the local Democrats and the Republican politicos want this.

Where is the investigation about the alleged bribes?!? One would think that assertions such as this would cause strong rebuttals and at least a committee probe. VERY STRANGE no one is talking about this even to refute Mr. Vaughn's charges of corruption on our fabulous City Council.

You're not going to see any investigative reporting by Gannett, the IBJ or any of the local TV stations. Their management serves on the board of GIPC, also known as Indianapolis' shadow government, which gave birth to this monster. They're invested in the deal, and they will only report facts that support its approval. In a manner of speaking, the people of Indianapolis are f _ _ _ ed.

Dang. This Garvey gal has served on more corporate boards than Susan Bayh--all related to her government work.

And you won't see any real reporting from the Greenwood Daily Journal, which is something of an analog to Chicago's Daily Herald, as Greenwood is full of Republicans, and Republicans fully believe that government and corporations should merge power and act as a single government to give greater governing efficiencies and protection of corporate profits.

Maybe when this all blows over this Garvey chic can get a gig with Ivy Tech.

Gary - can you explain to me why the board of directors of the GIPC is so enormous? Does it really require that many board members?