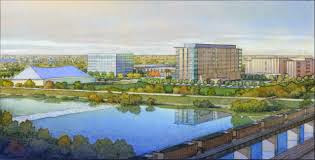 An analysis of the progression of the proposed Marion Co. Criminal Justice Center shows that significant changes were made by the Ballard administration since it first announced its plans a little more than a year ago to move forward with a public bidding process based on a public-private partnership ("P3") model recommended by the City's shadow government, the Greater Indianapolis Progress Committee, which is comprised of influential government leaders, downtown attorneys, business owners and other influential people with a financial stake in spending by the city-county government and downtown development. Those changes removed key stakeholders from the proposed complex and shrank the size of the project by at least 20%, likely due to the financial feasibility of the massive undertaking.

In December 2013, Mayor Ballard envisioned a more than 1.5 million square-foot criminal justice complex that would include facilities for: sheriff's office; an arrestee processing center and jail for all adult inmates; transitional housing and administration for community corrections; criminal courts and offices; juvenile court and detention facility; and offices for prosecutors and public defenders. By the time Mayor Ballard announced his choice of WMB Heartland Justice Partners as the winning bidder to build, operate and maintain the complex for the next 35 years late last year, the project's size shrank by nearly 280,000 square feet. Those substantial changes were made following the issuance of the original RFRQ the administration released in December 2013 and the RFRP the administration initiated in April 2014 with the three bidders it chose after eliminating two of the respondents to the RFRQ. The contents of the RFRP were not made public until after the administration announced the winning bidder in violation of the state's P3 law, which required it be made public last April.

Incredibly, the complex will not include office space for prosecutors or public defenders, who will presumably be forced to commute from their current downtown offices to the near west side site instead of the one-block walk they currently enjoy to the City-County Building. Elimination of law offices for prosecutors and public defenders saved the need for 185,000 square feet, or about 12% of the original space need. A juvenile court and detention facility replacing the current east side juvenile center got axed as well. That saved 130,000 square feet, or about 9% from what was originally proposed.

Changes made between the RFRQ and the RFRP slightly reduced the size of the adult detention facility from 760,000 square feet to 750,000 square feet. The 3,000-bed facility provides substantially more bed space than is needed, a move intended to generate additional revenues to offset the costs of the new criminal justice center by leasing space to the federal government for its detainees. The original proposal, however, called for bed space for at least 3,480 adult detainees, or nearly 1,000 more bed spaces than were needed. It's unclear what, if any, commitment the administration has from the federal government to lease bed space. Space for the criminal courts and community corrections grew substantially.

Annual payments made to the private operator of the complex would be close to $50 million a year, which are adjusted to increase over the 35-year life of the agreement to account for inflation. The initial annual payment of $47 million is $3 million under what the administration deemed to be the "affordability limit," which seems to be nothing more than an arbitrary figure the administration pulled from thin air. The administration suggests this annual fee will cost no more than what the city-county government currently pays annually to maintain the facilities which support these services. The biggest savings would come from eliminating the $19 million annually paid to CCA for the operation of Jail II, a grossly-inflated fee the city-county government has been paying for nearly two decades thanks to former Mayor Steve Goldsmith's half-baked privatization scheme that supposedly saved money. Now we're being told to replace one privatization scheme with another privatization scheme to achieve cost savings the first privatization scheme never realized. We could have built a new, state-of-the-art jail by now with all of the money blown on Jail II.

The city-county government could wind up paying at least $1.75 billion in payments to the private operator through the end of the 35-year period, at which point the City will assume ownership of the complex of buildings and parking garages. The city-county government will still be spending money to maintain all of the space being vacated by the criminal courts at the CCB so any savings there is illusory. Although the annual service payments will cover some expenses like janitorial costs, there are still many expenses the city-county government will continue to pay. For example, the sheriff will still be required to provide security for the entire complex (in addition to the CCB), staff the jail, laundry, kitchen, medical and commissary-related activities. The sheriff will continue to retain control over the slush funds for commissary and inmate pay-per-call telephone services. The private operator will furnish initial furniture and fixtures for the initial build-out and move-in, but the costly IT expenses are not included in the annual service payments, along with other costly, annual utility expenses.

The annual service payments assume the private owner will be exempt from paying property taxes on the large complex of buildings, even though privately-owned real estate and improvements are supposed to be subject to real and personal property taxation. The Los Angeles County Assessor is contending the Long Beach Courthouse built, owned and operated by Meridiam Infrastructure, the same private operator chosen by Indianapolis, must pay property taxes on the facility, which is currently being litigated. With a construction cost of about $490 million, property taxes could add as much as $5 million to the approximately $50 million the state of California currently pays to the private operator. Indianapolis' P3 vendor will operate the parking garages and share revenues derived from parking fees with the City. The City hopes to generate parking revenues not only from visitors to the criminal justice center but also visitors to a proposed outdoor concert venue next door and the zoo across the street.

When Ballard announced plans for the criminal justice complex in December 2013, he suggested the larger facility envisioned could be built for a little more than $300 million. WMB Heartland Justice Partners plans to borrow and invest more than $583 million to build the down-sized complex of buildings and parking garages specified in the winning bid. Those construction costs are more in line with what the principal partner, Meridiam Infrastructure, invested in construction of the Long Beach Courthouse. Looking at the per square-feet cost the city-county government will be paying to the private operator, it will run more than $38 a square feet, which is a figure much higher than the rate Class A commercial office space landlords get from tenants who lease space in downtown Indianapolis, which is closer to the $20 to $25 range. Sheriff John Layton claims the cost of the jail is what drives up the cost of the annual service payments.

Neither the administration nor the sheriff's office have provided any financial analysis documenting actual current expenses for operating the existing facilities, which will be replaced by the annual, lump sum payment to the private operator to make a rational comparison with what is being proposed. It is my belief the numbers don't add up, that the supposedly competitive bidding process was nothing more than a sham for reasons I have previously explained on this blog, and that the real reason the City-County Council approved another large income tax increase at the insistence of Mayor Ballard that took effect on January 1 was to pay for the higher costs expected from this new undertaking, not the excuse of hiring more police officers, which was precisely the same lie the previous mayor and council told us back in 2007 when they increased the income tax rate 65% but wound up hiring fewer, not more police officers. Traditional tax-exempt financing is a cheaper way of building a new criminal justice center, but that method would likely be subject to a public referendum process, which our elected officials want to avoid at all costs.

The chart below compares the square-footage size envisioned by the RFRQ versus the RFRP. Click to enlarge. 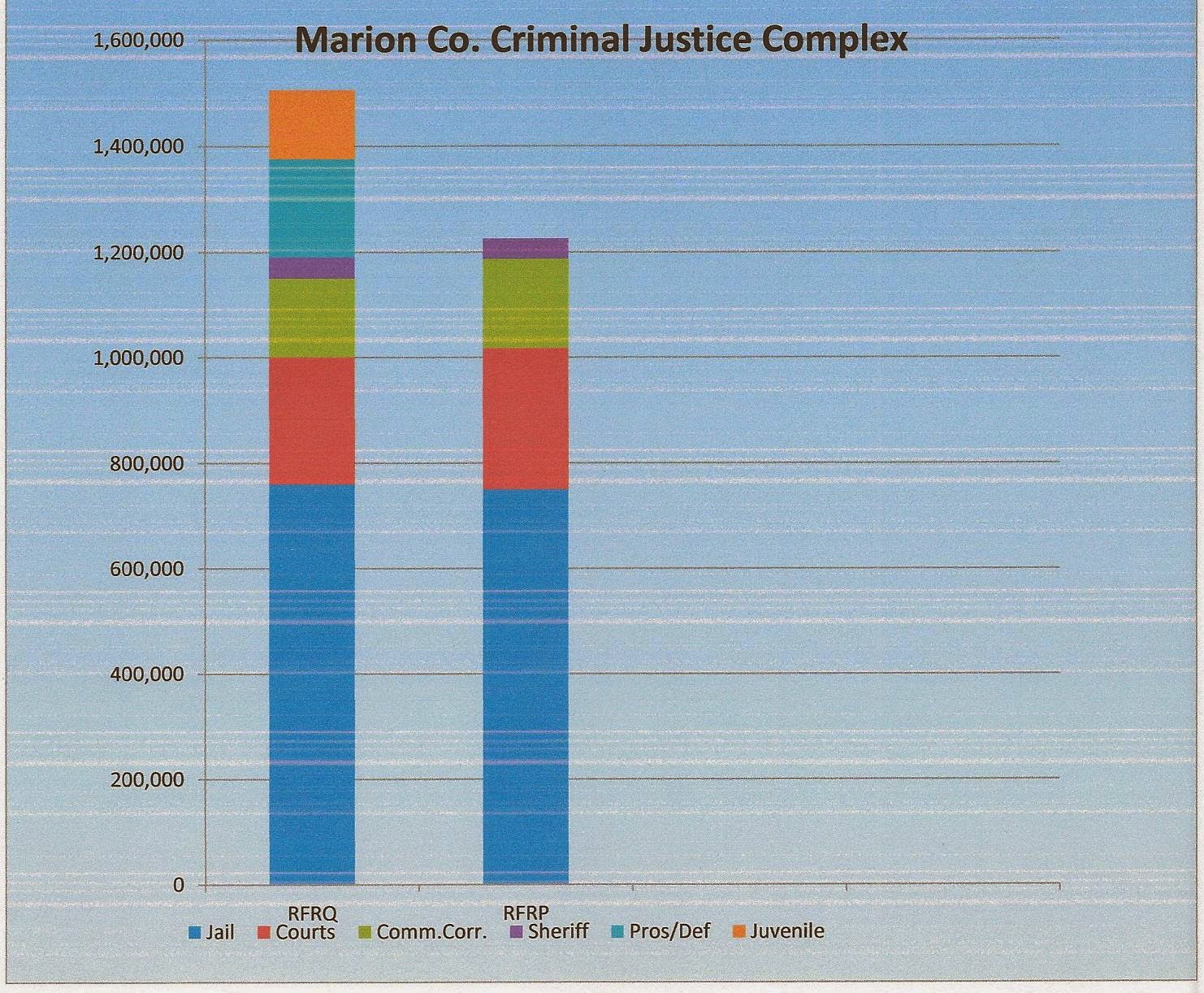 And this is just one more reason why big money will buy a Council election win out from under Christine Scales. Her opponent just married the executive director of the Greater Indianapolis Progress Committee. Would his vote for the Criminal Justice Center be in doubt? Not that his vote wasn't already clinched since the firm he works for received a fee from the city for securing the property the center will be built on.

Thanks for pulling this all together. It's a ripoff no matter which figures you go with. Not to mention the impact of vacating all that space downtown.

Will inmates who are being held
or sentenced on body attachments such as for contempt of Court also be housed at this jail complex?

Where is the Public Integrity Section of DOJ?

Oh, they are on a racist crusade in Missouri instead of investigating true corruption & mob influence here.