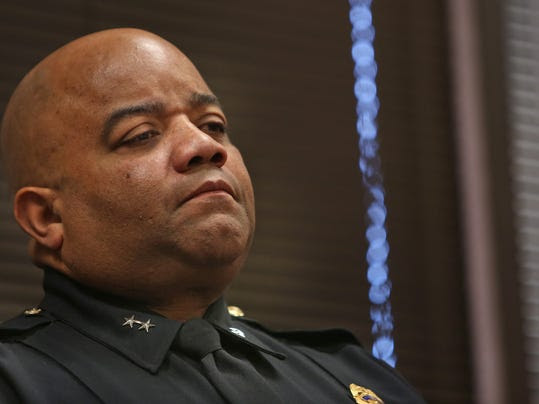 U.S. Susan Brooks (R) put out a press release announcing she had invited IMPD Chief Rick Hite as her personal guest during President Barack Obama's State of the Union Address Tuesday night, an invitation he has accepted as questions about his leadership are growing among the department's rank-and-file.


“I am humbled Chief Hite will be joining me for this historic occasion,” Congresswoman Brooks said. “I’ve extended this invitation in recognition of the outstanding work being done by IMPD and law enforcement throughout Indiana and the nation. Chief Hite and his fellow IMPD officers work day and night to keep Indianapolis residents safe and sound. Their peers from coast to coast serve with bravery and distinction to safeguard our communities. As our nation’s leaders gather to set our priorities for the future, I am proud to take this opportunity to celebrate the courage, integrity and sacrifice of our law enforcement community.”

"It is truly an honor to receive this invitation from Congresswoman Brooks and to have the opportunity to represent the brave men and women of the Indianapolis Metropolitan Police Department in our nation’s capital,” Chief Rick Hite said. “Our federal partners and nation’s leaders are key to our sustained effort to serve and protect the citizens of this great city. I am humbled and honored by this opportunity.”

Within the ranks of IMPD's more than 1,500 officers, there are many who wish Hite would just stay in Washington permanently. The furor over the alleged cover up of a high-ranking police officer false reporting and testing positive for alcohol after a citizen phoned police to report him driving his police car erratically and ignoring traffic lights is growing. Sources say morale within the department is reaching new depths after details of this incident spread among rank-and-file officers. Attempts to obtain a copy of the police incident report proved unsuccessful despite the existence of a computer aided dispatch report documenting the events of December 20, 2014. Unless Public Safety Director Troy Riggs investigates and explains the actions of all involved in failing to follow the department's professional standards, including taking any appropriate disciplinary action, confidence in IMPD's leadership will only continue to erode.
Posted by Gary R. Welsh at 9:16 AM

What an obvious political ploy with no real merit other than possibly to show Nancy Pelosi that the California extremist liberal Democrat is not the only person who can push an agenda by promoting a clearly incompetent individual before the United States Congress. Mrs. David Brooks unbelievably describes her invitation to Hite as being at the “historic occasion” of Barak Obama’s State of the Union Address. Attorney Susan Brooks leaves it to our imaginations as to what is so historic about an umpteenth State of the Union Address that occurs with the regularity of bowel movements… and which is probably more accurately portrayed as such.

Why is it so few people will ask the hard questions about just how Susan Brooks came from seemingly nowhere other than her judicial appointment during which she couldn’t [wouldn’t?] find the obvious truth about the Lawrence, Indiana, infamous water company sale scheme? The blatantly insider backroom Lawrence water company sale scam netted then-Lawrence mayor Tom Schneider’s pals significant windfalls and resulted in substantially higher water bills for consumers in a sale that never really needed to occur as was insisted it should.

That her husband David Brooks was personally involved in the redrawing of some of the Council voting districts and precincts in which Fifth Congressional Representative GOP Primary candidate Susan Brooks would later be victorious reeks of the rotten and foul if not unethical- but this is one time-tested way crony insiders become elected and continue a rise to power and increased personal wealth. David Brooks is a man known to have a long vindictive political memory against those who disagree with the GOP candidates he supports. The former Center Township Chair threatened me for my efforts to support candidates opposing the crony RINO Republican status quo David Brooks was a part of and remains to this day. In what I can only describe as a violent and hateful voice mail assault, I was threatened with bodily harm for my support of candidates David Brooks did not favor. The irony is that many of David’s favored failed to win office but that is the history of the Marion County GOP, isn’t it? It is far more important to get those chess pieces in play so that they can continue to rain down dividends for years to come.

All this may appear off topic but tie the loose ends and you come back to insiders promoting and protecting agenda-driven persons who sit on the chess board waiting to be played. With all due respect, Hite was never considered by many as the best candidate for his job and his performance underscores that widely-held belief.

Ah grasshopper Anon 1203. You speak of many truths.

Unless Public Safety Director Troy Riggs investigates and explains the actions of all involved in failing to follow the department's Professional Standards, including taking any appropriate disciplinary action, confidence in IMPD's leadership will only continue to erode.

I should have termed the voice mail message as "threatening"; I also should have written that an analogy- rather than a direct statement- was used about breaking something.

My choice of words and phrases about the voice mail as noted above was indelicate.

And poor Troy Riggs, who says he loves his job, will not be able to reveal the truth or he will be packing his bags again.

Wow anonymous....tell us how you really feel!