Should Grand Juries Be Abolished In Indiana?

Sen. Mike Delph (R-Carmel) is introducing legislation this year which would abolish the use of grand juries in Indiana. The problem Delph has with grand juries, a view I personally share, is the secrecy under which they are conducted. Their use has gained national attention lately when state prosecutors used grand juries to exonerate police officers in Ferguson, Missouri and New York City of using excessive, deadly force in arresting suspects. Critics believe prosecutors use grand juries as a cloak to hide behind when they don't want to be personally accountable for a decision of whether to charge or not to charge a person with a crime. Because of the secrecy of the proceedings, the public often doesn't know whether evidence presented to the jury was shaded to reach the prosecutor's intended outcome. That's why you frequently hear the phrase used, "you can get a grand jury to indict a ham sandwich."

The Indianapolis Star has a story discussing Delph's legislation. Naturally, Marion Co. Prosecutor Terry Curry, like all of his predecessors, like the grand jury system. He says they are particularly suited in cases that involve lengthy investigations or where you have conflicting accounts of what happened from witnesses. "It's usually just some sort of unique circumstances that justify using the grand jury," Curry said. "In those situations, we think it's appropriate to essentially set the circumstances out in front of citizens like you would a (trial) jury and let them know what the applicable law is, and they can make a determination." Prosecutors defend the secrecy of the proceedings as necessary to protect the grand jurors from fear of retaliation and as a means to force uncooperative witnesses to testify under penalties of perjury. An attorney for a witness is not allowed to enter the grand jury room; however, an attorney whose client is the target of the investigation can advise his client to take the Fifth while testifying to avoid self-incrimination.

Curry's office gave a recent example of the shooting death of Jason Pedro outside a Chase bank on the west side. Pedro was shot multiple times after he fled on foot from a vehicle that had pulled up to an ATM machine. The driver of the vehicle, James Schlenkert, claimed Pedro tried to rob him, and he shot him in self-defense after wrestling Pedro's gun away with him. The prosecutor's office thought surveillance video showed something different. It showed Schlenkert firing his gun at Pedro as he fled, and then putting a few more bullets in his head after he fell to the ground. Police thought the surveillance video supported Schlenkert's account, but the prosecutor's office wasn't convinced. A grand jury viewing the evidence chose to indict Schlenkert for voluntary manslaughter. Thus, the prosecutor's office could blame the grand jury for getting it wrong if a jury later acquits Schlenkert at trial. That's one of the main reasons prosecutors like grand juries.

Prosecutors in Indiana like grand juries in public corruption cases where they are frequently used. Unfortunately, in counties like Marion County, grand juries are often used to cover up, not prosecute public corruption. While the prosecutor's office says the secrecy of the grand jury proceedings is maintained, I'm not buying it. This county has had a lot of corrupt prosecutors in its past who have abused the grand jury system. Back when James Kelley was Marion Co. prosecutor back in the 1970s, he had his gay lover, Joe Miller, a drug dealer and pedophile, working as a bailiff for the grand jury. There were allegations at the time when the prosecutor's office was investigating dirty cops that transcripts from the grand jury were being sold. Miller denied any knowledge of the selling of grand jury transcripts, but he told investigators a lot of information about trips he took with Kelley to other cities in the U.S. and abroad, describing himself as a Greek sex slave bought at an auction by Kelley. 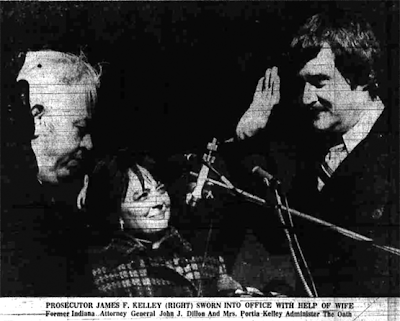 In Kelley's case, the police got what they wanted. Their dirty cops weren't prosecuted by Kelley for the most part. Kelly got what he wanted. Importantly, he didn't have to answer questions about that gay party he attended out in Irvington where three employees of the gay bar where Miller manufactured his drugs were found shot to death in a corn field near Carmel the following day. The evidence gathered by police that could have led to criminal charges against him got swept under the wrong, and he was allowed to take a new job working for the federal government in Washington instead of running for re-election. Evidence that could have been used to prosecute powerful men in Indianapolis involved in a call boy ring slipped away as well. Miller never got prosecuted for molesting young boys either, allowing him to go on to become a multi-millionaire with close ties to some of Indiana's most powerful politicians before he supposedly took his own life a few years ago with the assistance of the very drug he manufactured that made him a wealthy and powerful man. Most importantly, the political career of former Indianapolis Mayor Richard Lugar was saved.

The special prosecutors in Charlie White's case used a grand jury to indict him on seven felonies related to allegations he committed vote fraud by voting at his ex-wife's home in one election when he was in between homes and serving on the Fishers town counsel after he allegedly moved out of his district. To say White was overcharged is an understatement. The grand jurors were misled about the law, which unfortunately continued right through his trial. Ironically, one of the special prosecutors, Dan Sigler, Sr., rushed home to update his voter registration in the middle of the grand jury proceedings after he realized he was still using an address at which he was no longer residing to vote as he asked grand jurors to indict White for essentially the same offense. If the public could have seen the transcripts from that grand jury, I suspect they would have a much different view of it, particularly the extent to which Gov. Mitch Daniels had used his Indiana State Police to build a case against White, the same law enforcement agency which ignores most public corruption in this state, and which conspired to destroy the law enforcement career of Ryan Harmon because of his public corruption work within the department that threatened some very powerful people.

What happens in public corruption cases is that whistle blowers testify in good faith, believing the proceedings are secretive. Nonetheless, the bad guys always seem to find out about their testimony, and they do face retaliation, the prosecutor's claims notwithstanding. The bad guys don't seem to get prosecuted, and the corrupt prosecutors hide behind the secrecy of the grand jury proceedings. It's easy for the prosecutor to engage in blatant prosecutorial misconduct by the manner in which the grand jury proceedings are conducted, and the public never knows the extent of that misconduct. Delph's legislation definitely has merit. I noticed that in the Ferguson, Missouri case, the prosecutor released much of the grand jury testimony to reassure the public. I'm assuming Missouri law permitted him to do so, although I got the impression that was a very rare case of that being done in Missouri. I suspect if the process was more public, prosecutors wouldn't be relying on the grand jury system so much. After all, most criminal charges are brought based on charging information supported by probable cause affidavits.
Posted by Gary R. Welsh at 8:34 AM

in paragraph 3, you mean prosecutor's office wasn't "convinced," not "convicted."

You might want to check this out Charlie White has gotten Jim Shella's attention!http://blogs.wishtv.com/2014/12/31/charlie-white-fights-back/

Thanks for the editing note, anon.

We need more of them here for public corruption cases or nothing still will be done and the chaos, drama, and pay to players continue their corruption. The problem is not enough is being done.

Anon 1:25 said it best! We need a real Prosecutor with a pair to send these corruption cases to The Grand Jury, not sit back and say: "The Inspector General Report never got here."

I dare say a good Prosecutor could have removed most of the officials in Center Twp Government had they investigated and referred the matters to The Grand Jury!

We need to get police and prosecutors away from having any say in their criminal convictions and sentences.

Looks like Anon 8:35 has been partaking of some herb. To say the thought was outrageous was hardly keeping it in perspective.

The Public Defender is a defender, with NO authority to prosecute under Indiana law. Budgeting for that would constitute Official Misconduct.

Positing a change necessarily means that the status quo needs to be altered.

Of course, they don't teach that basic rule of inference in Hilljack School, do they?

Just another reason why everyone looks down on cops and cop-lovers.

Reading 2:08's stupid, terrified comment is clear reason why the Public Defender needs to be greatly empowered to put cops back down in their place.

The cops don't like having to answer to their bosses. Times are changing, cops. Lots of answering going on.

Anon 7:51 - Is just a heckler from the Communist Party. Disregard his outrageous spew. She is uninformed, does not understand our government, and would enamour revolution.

"They are among us."

You just said that the Communist Party, and not the Republican Party, stands for greater governmental accountability and increased punishment of cops and prosecutors who breach the public trust. Nice.

You've just proven that your Republican Party is less desirable and offers less freedom than the Communist Party. Thanks for the rare honesty.

That your Republican party prefers a government that has only the weakest prosecution of cops and prosecutors who violate the public trust clearly shows why your party is driving apace to irrelevance.

A "revolution" isn't quite necessary. Texas and Georgia will go blue, soon enough, and in your lifetime, you may live to see Democratic supermajorities in Congress.

As the Republican Party has become America's Fascist Party, sooner or later, the average person who struggles with bills but has spent a few decades as a dependable Republican will revert to the Democrats, as they are the most reliably populist party.

As police are now properly understood as the Rich Man's Army, you are also witnessing the rapid decline in support for the shock troops of the corporate state.

"Revolution" means a turning over, and America is turning over right before your eyes and to ideas that you hate.

Particularly terrifying for you is that your side* has been working for the past 30 years to put a gun in every house. If the folks on your side ever figure out they've been getting a raw deal, you fascists will have some real problems with your own party members and all their guns.

*But not you, of course, as you have a very different motive from the rank-and-file. Your buddies don't know that you're not terribly pro-gun, and they certainly don't know that you want high restrictions on the type of person eligible to own a firearm.