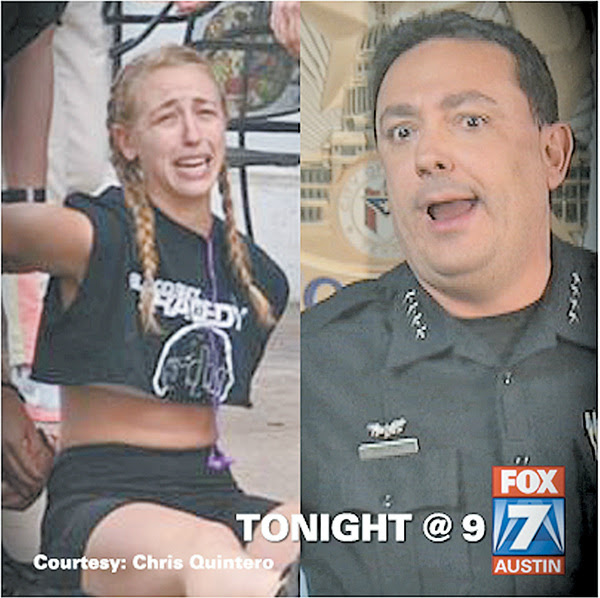 Phillip Perea worked as a promotion producer at a Fox News-owned affiliate, KTBC Fox 7 in Austin, Texas. Video of Austin police arresting a University of Texas student for supposedly jay walking while she was jogging sparked outrage after it went viral on the Internet. Austin Chief of Police Art Acevedo stirred further controversy during a press conference rant where he defended the police officer's arrest of the jogger by saying words to the effect that at least they weren't sexually assaulting her like officers in other cities had been accused. "In other cities there's cops who are actually committing sexual assaults on duty, so I thank God that this is what passes for controversy in Austin, Texas," Acevedo said, words that would later lead to a public apology from him.

Perea's choice of the photo image above in a Facebook post used as a teaser for the TV station's coverage of the press conference enraged Chief Acevedo, who complained to station management it made him look like a lunatic. In retaliation, he refused to provide any access to the station. That was the beginning of Perea's problems with the TV station's management. He recorded meetings with the general manager in which he blamed Perea for the station's loss of access to the Austin Police Department. Eventually, management forced Perea out in May after he complained his boss contrived issues with him as part of an effort to force him out. Yesterday, he was passing out fliers outside Fox News' headquarters in New York complaining about Fox News' bullying behavior towards its employees and how they ruined his career. Later, he pulled out a gun and shot himself in the chest. He died a short while later at the hospital. Sad story.

Below is video taken from Chief Acevedo's controversial press conference, which led to Perea's problems with the station's management.
The video below is a video Perea uploaded to YouTube prior to him taking his life yesterday in which he details the grievances against his former employer, including audio of meetings he secretly recorded with them.

The walls are coming down in America.

Instead of doing real reporting, reporters just want an easy layup of a story, and "access" gives them quick and easy copy.

Real reporting is much harder and doesn't give you a quick 500 word piece.

Instead of crying that they don't have "access," run stories, every night, claiming "SCANDAL" WHAT IS THE AUSTIN POLICE DEPARTMENT HIDING?

When you don't get access, stonewalling becomes the story, and every police incident becomes subject to real reporting and not just press release regurgitation.

America is becoming very much like the USSR with state media, no freedom of the press, and professional blacklists.

Look across the sweep of the Internet. Free speech is curtailed, and almost every forum strictly controls its message, censoring dissenting views.

Americans have lost their taste for free speech.

Uumm...The Fox affiliate and Fox HQ luckily kicked this to the bloody curb before

Uuummm...The Fox affiliate as well Fox HQ dodged the bloody bullet on this one. Perea was batsh!t crazy. Lorana hopefully paid for his ticket to NY in order to get him as far away from her as possible. I'm surprised he didn't call his rebuttal to a "truth manifest" and go back to his cabin.
IMO this story is not about free speech as it is to how to remove a troubled employee from the workplace. I wonder who he was going to blame at Fox HQ for the situation he got himself in Megyn?

I agree with Anon 11:45: The arrest of a student for jaywalking is outrageous. A fine may be appropriate in aggravated circumstances. How about a warning in most occasions?

If that goofy police chief wants to whine about the fact he is crazy and it's being broadcast, then he needs a different job. As a public official, he is in the public eye. Don't have outrageous policies and order outrageous acts, and you won't have those pictures.

I also agree that the station should have added a police beat reporter and started going to the scenes of all police events and conducting interviews, etc. If the police department refuses to answer their media queries, made that the news. "The police was asked (question) by the news but refused to respond yet again. What are they hiding?" Then flood them with public records requests on a daily basis.

If that chief wanted to act like an ass, then the media should report it and return the favor. I bet the ratings would increase exponentially from those reporting just news releases.