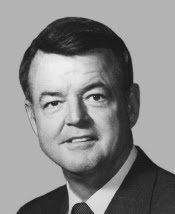 Former U.S. Rep. John Myers (R), 87, who represented a west central Indiana district in Congress for three decades from 1966 to 1996, died at his home yesterday morning according to the Lafayette Journal-Courier. Gov. Mike Pence issued the following statement on his passing:


“It was with deep sadness that I learned of the passing of former U.S. Congressman John Myers, a friend, patriot, and leader who made a real difference in the lives of Hoosiers and in the history of our state. For three decades, John worked tirelessly to represent Hoosiers from west central Indiana in the U.S. House of Representatives. The legacy of public service he leaves behind is unmatched, and we do well to strive to emulate his example. The First Lady and I extend our deepest condolences to his beloved family and all those who mourn the loss of this Hoosier leader and hero during this difficult time.”

Myers was kind of our adopted congressman when I was growing up in east central Illinois just across the border. He was more than happy to represent people in neighboring Illinois who felt alienated from our long-time Democratic congressman. I met him on many occasions, and he and his wife once came to my parents' home for a political fundraiser. The guy really knew how to work a crowd, and he never forgot a name. I think one of his biggest disappointments was his inability to secure funding to make the Wabash River navigable at least from Terre Haute down to the Ohio River.
Posted by Gary R. Welsh at 1:49 PM

It's so good to know that at one time, elected officials actually did their jobs.

So in 1978 I'm a freshman studying in my room. It's election time and Myers is visiting the frats at my school. He knocks on my door and we introduce each other.

The next time I see him is four years later at some function at the college. He sees me, reaches out his hand and says "Hi Mike!"