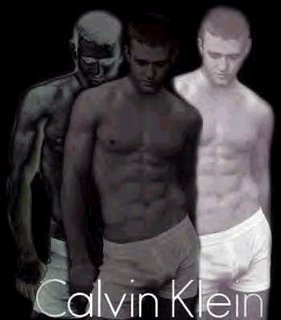 'N Sync boybander Justin Timberlake has been trash talking this year's American Idol winner, Taylor Hicks. Timberlake thinks that the pop-soul singer, whose voice sounds very similar to the talented Michael McDonald's voice, can't carry a tune, and that he better not be gay if he knows what's good for him. Timberlake, who is now pursuing a solo career, tells Fashion Rocks magazine:

"The guy who won - people think he looks so normal, and he's so sweet, and he's so earnest, but he can't carry a tune in a bucket. Do you realize how much pressure it is to put on somebody all of a sudden?" . . .

"If he has any skeletons whatsoever; if, God forbid, he's gay, and all these people in Mississippi who voted for him are like, 'Oh, my God, I voted for a queer!' It's just too much pressure."

Timberlake's publicist is rushing to the scene to do damage control:

"He has tremendous affection for Taylor Hicks' success," Sunshine told The Associated Press on Thursday. "He would never say anything that personal about somebody he's never met. He only wishes him the best."

It's hard to understand how these comments could be taken out of context. The interviewer gives us no sense that he was joking around when he made the statements. Timberlake's statements are particularly disappointing given the fact that it is no secret that he has a large gay following. His former bandmate, Lance Bass, just came out of the closet last month and admitted he is gay. Bass, also a Mississippi native, said that he hid his sexual orientation for so long, in part, to protect his bandmates. It is now easy to understand his decision after hearing what Timberlake has to say about Hicks.

It frankly never even occurred to me that Hicks could be gay. He was recently named People magazine's hottest bachelor for 2006. The thought that Timberlake could be gay has crossed my mind many times, notwithstanding his well-publicized relationships with Britney Spears and Cameron Diaz. For people who like to engage in stereotyping, the high-pitched Timberlake sends off one's gaydar far more than Hicks. Perhaps he's trying to over-compensate for insecurities about his own sexuality. Dating attractive older women and staging hetero-appealing publicity stunts like tearing off part of Janet Jackson's costume at the halftime of the 2004 Super Bowl to expose one of her breaths before a live television audience seem to be part of his act to provide him cover.

It is very disappointing to see someone who has achieved so much success, in part, because of the enormous support he has received from the gay community, to publicly diss another performer because he perceives him to be gay. Timberlake's comments about Hicks will not go unnoticed by the gay community, and they will have a long-term impact on Timberlake's career.
Posted by Gary R. Welsh at 8:05 PM

I usually agree with you and I'm not really into standing up for Justin Timberlake but its ridiculous to act like he is being some sort of bigot. First, he seems to be dissing this Hicks guy because he simply doesn't think he's very good. He's got a right to his opinion on that.

Second, it doesn't seem that he saying its right for the public to get into anyone's personal life, just that it happens and it's an adjustment.

But what is really ridiculous is that since Timberlake has somehow offended you, you question his sexuality as though it would somehow be a negative thing if he were gay.

You're doing exactly what you seem to be accusing him to be doing. And if the gay community participates in this sort of garbage, how on earth can we expect better from anyone else?

I disagree with the earlier post. If Timberlake's comments were meant to express his opinion that Hicks isn't very good, then why was it necessary to raise the gay issue? He also has not publicly supported Lance Bass at all since he came out of the closet. I take Gary's comments as sort of the pot calling the kettle black. If Justin wants to speculate about Hick's sexual orientation, speculation about his own is fair game.

Taylor Hicks rocks! I saw him at the state fair last night, and he was spectacular as always. Justin sucks big time for saying this about Hicks. He must be jealous.

turnabout is fair play! time to post some beefcake fotos of Taylor Hicks !

OMG! Please, if there is a God in heaven, do not subject us to photos of that skank Taylor Hicks.