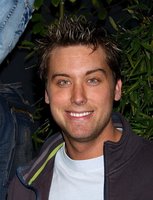 The Washington Blade once upon a time criticized Blogactive.com for its role in outing more than a dozen public officials over the past couple of years who it claimed were leading private lives that were inconsistent with their public positions on gay rights-related issues. Today, it jumped on the bandwagon in a big way, outing N'Sync boy band member, Lance Bass, along with a slew of other celebrities on its Blade Blog. The Blade writes of Bass:

Lance Bass, of the mercifully defunct boy band N'Sync, hasn’t scored this much press since his odd and ill-fated attempt at space exploration.

Bass made the gay party rounds over the Fourth of July weekend in Provincetown, Mass., appearing in public with a group of gay friends, including supposed boyfriend Reichen Lehmkuhl of “Amazing Race” fame.

According to several gay bloggers who were in P-Town and saw the “alleged couple,” including Andy Towle and Cyd Zeigler, Bass tried lamely to disguise himself with a hat. Unfortunately for Bass, it wasn’t big enough to fool the New York Post’s Page Six, which also reported the sighting. It isn't the first time Bass was caught out and about with the boys. Years ago, when N*Sync was still the rage among teenage girls and many a gay twink, Bass was spotted and photographed several times at Oz and the Bourbon Pub, the twin pillars of the gay club strip in New Orleans' French Quarter.

I seriously doubt any member of the gay community will be surprised to learn Bass is gay. But what most people are probably asking, "Who cares?" The guy was the least talented of the boy band. He never sang a solo role on any of their songs. As far as I could ascertain, his only talent was being able to dance in step with his fellow boy band members. And let's not forget how he made a complete fool of himself for his ill-fated publicity stunt to travel into space with Russian cosmonauts. The Russians booted him after he spent a couple of months training with them and failed to cough up the $20 million passenger fare for the trip. His only venture into the movies, On The Line, was a total box office failure, grossing only $4.3 million.

But forget about Lance Bass. The Blade went on to list a bunch of other folks of far more interest it claims are hiding in the closet. The Blade writes:

With this more public quasi-outing, Bass joins a growing list of openly closeted celebrities and politicians who play transparently coy games with their sexual orientation. Bass, CNN’s Anderson Cooper, Fox News’ Shepard Smith, actress Jodie Foster, singer Ricky Martin, Congressman David Dreier (R-Calif.), actor Sean Hayes, and too many more to mention are doing a disservice to their fellow gays by choosing the security of the closet over the integrity of living an honest life.

It's the same song and dance perfected by Ellen DeGeneres and Rosie O'Donnell for years before they finally came clean.

The Blade criticizes mainstream media outlets for interviewing and promoting "such stars and accept their non-answers" about their sexual orientation. "It's about honesty," the Blade proclaims. You have to admit it is kind of fun speculating about all the Hollywood pretty boys as they take turns pretending to mate with their Hollywood beauty counterparts everyone knows is secretly lesbian.
Posted by Gary R. Welsh at 8:24 PM

I remember the Blade taking blogactive to task for outing hypocritical officials, which sort of leaves a bad taste in my mouth about this outing.

I'm not against outing public figures in general, and I like blogactive's work. They at least seem to have a point to what they were doing.

But the Blade outing Lance Bass -- what does that accomplish? Especially since the Blade is being hypocritical itself.

Sean Hayes is in the closet??

Anonymous--I had the same reaction to Sean Hayes. I must have missed something.

Sean Hayes has never publicly admitted it. Everyone assumes he is out because....well, look at him. He has been criticized by celebrities who are out. The stand up comedian Jason Stewart (sp) was in Indy two or three years ago for the GLBT film festival, to talk about his film, and he was critical of Sean Hayes for being closeted.

I also have a friend who was a friend of Sean's in college, who has said the same thing.

Is there an indiana gay blog site besides this one? Can you put it (them) as links from yours for us?

I dont think its right to out someone, its a personal decision. Anyways, someones sexuality is there business noone elses, whats the big deal?!

Well, Lance makes it official. He gives an exclusive interview with People magazine in which he comes out of the closet. Read more here:http://people.aol.com/people/article/0,26334,1219142,00.html