Favoritism On The Avenue 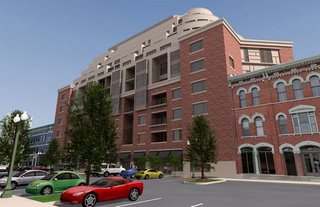 The city's Metropolitan Development Commission voted 5-1 to allow the construction of a 10-story building for luxury condominiums, known as Three Mass Ave., on Indianapolis' Massachusetts Avenue in the heart of the recently designated historic district. The building will be wedged between two historic buildings. The 3-story building to the north is home to McNiven's Restaurant and Bar. To the south is the charming, 3-story, flat-iron building owned by Henry Price and serves as office space for Price's law practice.

It is noteworthy that the contemporary, art deco design of the building makes it more suited for South Beach than Massachusetts Avenue. As commission member Robert Shula explained, "I can understand how the first six floors blend into the neighborhood, but it looks like Flash Gordon did the top of the building . . . I don't understand why it has to be so futuristic." The building completely clashes with the historic character of the buildings still remaining on the Avenue, many of which were built near the turn of the last century in the late 1800s and early 1900s. But even more significant is its stature. At 10 stories, it will tower over other buildings on the Avenue, most notably the two on other side of it.

When another developer proposed a 10-story building for luxury condominiums at 757 Mass Ave a few years ago, it was turned down over height concerns. Instead, the city made the developer scale back the project known as the Beilouny to a 5-story building, which blended in much better with the historic character of the Avenue. Scott Keller, a former developer of property on the Avenue and City-County Council member who represents the district that includes Mass Ave., said "the design is a good compromise because the land is too valuable to make a shorter residential building economically viable" according to the Star. That same argument fell on deaf ears when the developer of the Beilouny made it.

So why the differing outcomes for two very similar projects? The developer's name is the answer. Todd Maurer is a principal owner of Halakar Properties, which is developing 3 Mass Ave, and he is also the principal owner of the problem-plagued Union Planters Building, which is quite an eye sore to Indy's downtown as it sits unrepaired months after it was severely damaged by a strong storm in early April. Todd is also the son of Mickey Maurer, the state's chief econcomic development officer, who is owns the Indianapolis Business Journal, several radio stations, numerous properties around the city, and is a major shareholder in National Bank of Indianapolis, among other things. The name makes all the difference in this city.

If the two adjacent building owners are lucky, 3 Mass Ave. will be successfully built without causing damage to their buildings. When the Beilouny was constructed, the builder excavated a huge hole next to the 745 Pub building for an underground parking garage without bothering to shore up the 745 building as required by the city's building and construction code. That caused the 745's kitchen at the rear of the building to collapse into the hole early one afternoon about 18 months ago while a number of patrons were dining. Luckily, the patrons and employees were able to evacuate the building safely.

The 745 building still sits unrepaired and unoccupied after all this time due to an ongoing dispute between the building's owner and its insurer. It does not appear that the city even bothered to fine the builder for blatant construction code violations, which could have just as easily ended tragically for 745 Pub patrons and employees. Ironically, one of the co-owners of the 745 Pub is the spouse of one of the co-owners of McNiven's Restaurant & Bar. I bet they will be watching construction of 3 Mass Ave. very closely as they should.
Posted by Gary R. Welsh at 3:26 PM