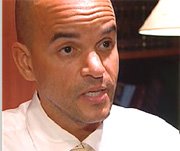 A special prosecutor has been appointed to investigate allegations by a Marion Co. sheriff's deputy that a visibly drunken city-county councilor, Ron Gibson, pushed and threatened her outside the Blu Lounge during Black Expo. The Star reports:

A special prosecutor will look into an altercation last month between a Marion County sheriff's deputy and a City-County Council member.

Deputy Jean Burkert claims Ron Gibson, a Democrat, pushed and threatened her outside a crowded Downtown nightclub during Indiana Black Expo's Summer Celebration weekend. Gibson disputed her account, saying he was not intoxicated and did not do anything wrong. He said Burkert filed the police report days after the July 16 incident to protect herself from his complaint to Sheriff Frank Anderson about her conduct. He said he was confident that the truth would prevail.

Brizzi's request said the allegation against Gibson "may or may not rise to the level of criminal conduct." Brown has one year to determine whether to file charges against Gibson.

Anyone heard what, if any, actions Sheriff Frank Anderson's office has taken against Deputy Burkert in response to the complaint Gibson filed with his office in an effort to get Burkert disciplined or fired?
Posted by Gary R. Welsh at 7:30 AM

If the deputy is disciplined, I for one would call for Frank's head on a platter. The deputy was doing their job.

Being an at-large councilman does not bestow royal privilges, just like being a former Center Twp. trustee turned Congresswoman does not entitle one to royal treatment.

If Gibson filed a complaint, that must be processed just like anyone else's. If he had any sense at all he'd withdraw the complaint.

Sorry to hear that, Homer.

Soon, Dems will be making their 2007 At-Large council decisions.

Let's see if Gibson is on that list that the mayor's endorses. My guess is he will be. After all, they're partners in that horrible experiment with public money, Charter Schools.

This is the man who based his original opposition to the HRO and the smoking ban on his "religious beliefs."

If he'd just shut up most of the time, it'd be different. But he can't be quiet. It's against his grain. He's this council's Frank Short.

"Consent!" he yells loudly. Just to hear his own voice.

Ron, we don't need to hear every random thought that travels between your ears.

it is my understanding that ron gibson did not have to come and sign his complaint, that it was taken over the phone.... i also dont understand why anderson would allow his pio to throw burkerts suspensions on the news, that has nothing to do with anything..

if we are to believe the deputy, why would he not have been arrested that evening? pushing a law enforcement officer and public intoxication are two charges the prosecutor's office certainly has never had any problems filing in the past....