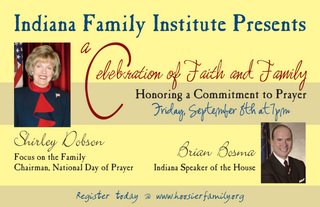 Reverend . . . uuhh. . . Speaker Brian Bosma will team up with Shirley Dobson, wife of the esteemed Dr. James Dobson of Focus on the Family fame, to headline the Indiana Family Institute's annual banquet. An invitation to attend reads:

The Indiana Family Institute cordially invites you to attend our annual banquet, A Celebration of Faith and Family: Honoring a Commitment to Prayer . Please join us as we proudly present the one woman who brings our nation together for a day, united in prayer, and the one man who is forbidden to pray in our Statehouse!

So why is this so-called Christian group lying? Because they are hypocrites, just as Jesus described their ilk in the Bible. And by the way, isn't the Indiana Family Institute suppose to be a nonprofit organization, which is prohibited from endorsing political candidates and otherwise engaging in partisan activities? Sorry guys, but a look at your website leaves no doubt that you are promoting a House Republican majority led by Bosma. Would someone over at the IRS get off their ass and start investigating these phony nonprofit groups here in Indiana that are blatantly violating our tax laws? And this is within the jurisdiction of our U.S. Attorney's office here in Indiana. Is anyone there concerned about enforcing these laws?
Posted by Gary R. Welsh at 9:09 PM

Gary, there is a perfectly good explanation for the lack of IRS intervention in all this nonsense. They are not just sitting on their asses, nor are they oblivious to the religious right's flagrant flaunting of the rules.

Here's how it works:

You (churches, religious leaders, and so-called "family organizations") sing the praises of the Republican party and deliver votes.

In exchange, we (the right-wing controlled Republican majority) will provide you with huge amounts of taxpayer dollars in the form of "faith-based initiatives." We'll also advocate for all of your social issues (same-sex marriage bans, abortion bans, et. al.) and of course, we'll keep the IRS off your ass.

I realize this may sound like some sort of partisan conspiracy theory, but what other explanation is there for the religious right to so blatantly disregard the tax rules?

I don't think I'm a partisan (I have issues with both parties), but in my mind the only way this issue is going to get fixed is for the Republicans to lose control, and (hopefully) realize what a mistake it was to let the kooks control their party and thus institute much-needed intra-party reform.

Without the protection of a Republican majority (controlled by right wing extremists), the religious right will develop a healthy fear of the IRS just like the rest of us.

There's a lot of truth to that, although I should point out that the Clintons used the IRS to carry out their dirty work against political opponents and groups they disliked. The Christian Coalition is one group targeted by the Clinton's IRS. The NAACP has been in hot water with the IRS since it openly opposed Bush. This year they invited Bush to speak at their national meeting in hopes of restoring relations and getting the IRS off their backs.

> Is anyone there concerned about enforcing these laws?

A number of conservative nonprofit groups were targeted during the Clinton years with IRS investigations/audits. I fully support the investigation of these groups, as I have urged that many are operating beyond the bounds of a truly nonprofit organization; however, the only groups targeted by the Clinton IRS were conservative, Republican-leaning groups, such as the Christian Coalition, Heritage Foundation, National Rifle Association, Western Journalism Center, Citizens Against Government Waste, and National Review and the American Spectator. The Clintons also used the IRS to go after Billy Dale, who exposed their nefarious dealings with the White House travel office.

How about getting rid of the IRS altogether? How did we ever survive before the creation of the social engineering group known as the IRS?

I think first we need to consider why AI believes IFI's c-3 status should be revoked.

Is it because IFI disagrees fully with Hamilton's ruling? Is this partisan? Aren't JUDGES supposed to be bi-partisan. So, an attack on a ruling cannot be partisan, can it?

Secondly, to take away a c-3 status when IFI is not being partisan, but merely attacking issues, would be view point discrimination. I think we still all agree that free speech is generally a good thing.

Of course Hamilton did not forbid Bosma to ever pray, but is that what IFI is saying? No, they are saying that during legislative sessions Bosma and other representatives of the community (especially clergy - Christian, Jewish, Muslim) are not allowed to pray in the manner that they wish to pray! That is certainly an attack on the historical tradition of the legislative body, if nothing else.

I encourage you to read the Indiana legislature's resolution in regard to Hamilton's ruling.