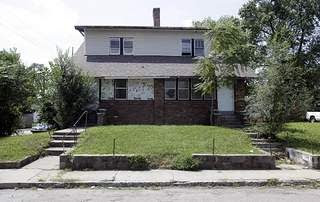 The Star's Francesca Jarosz has a story today discussing how Mapleton-Fall Creek Development Corporation, which is run by City-County Councilor Jackie Nytes, is purchasing properties with the large federal grant the Ballard administration doled out to her CDC just days after she crossed party lines and voted for Ballard's bailout plan for the CIB last year. Nytes isn't quoted in the story because she doesn't want to make it so obvious how her control of the expenditure of federal dollars clearly violates the Little Hatch Act. It seems her CDC is having trouble lining up financing to finish the homes and properties it is purchasing for development. The purchase of this propert on Park Avenue really peaked my interest:

Nate Lichti has plans to transform the boarded-up double at Park Avenue and 29th Street into an affordable single-family dream home.


The nonprofit developer where he works bought the house, and Lichti can envision it in its reformed state, serving as an anchor for the distressed block, where other new homes and condos are planned.

What's less clear is whether his group, Mapleton-Fall Creek Development Corp., will have money to complete the transformation.


The $90,000 to buy the property and start its renovations came from a slice of the city's $29 million in federal housing money to tackle foreclosed and abandoned homes. But that still leaves $60,000 that Mapleton-Fall Creek must secure to finish the job, and in this economic climate, finding it isn't easy. Lichti, Mapleton-Fall Creek's assistant director, has approached several banks to seek credit, to no avail.

Developers buying and rehabbing properties with those federal dollars, called the Neighborhood Stabilization Program, face the same conundrum in dozens of projects across Indianapolis. They're struggling to secure the funds to supplement NSP, which typically covers the price of buying a property and a sliver of its renovations.

If they can't, the houses or plots of land they've purchased for building new homes or rehabilitating dilapidated ones will just sit. And if projects are not completed by 2013, the federal government will start clawing back Indianapolis' money, which would mean a $29 million lost opportunity.

Today's story comes after the Star reported in another story earlier this year that Nytes' CDC had invested $186,000 in a home that it had listed for sale at just $114,000. I find it absurd that the CDC paid $90,000 to purchase a double that requires as much work as this one does at 29th and Park Avenue. I'm betting the CDC would be lucky if it can get the work done for the $60,000 it estimates it will need to make it marketable. What really irritates me is that there are countless examples of private investors who pick up these properties for pennies on the dollar and turn them into valuable property. Why the hell is Nytes' CDC wasting our money investing this much money in this particular house? Does its proximity to her own home have anything to do with it? The house has little historical significance. Sometimes it makes more sense to simply tear down these houses and give someone a clean lot on which to build.

"Mapleton-Fall Creek must find $1.6 million to complete the $5.6 million in construction and renovations, including rental properties and single-family homes, and its line of credit is low -- about $300,000," Jarosz writes. Her report indicates the Southeast Neighborhood Development Corporation has 30 homes on the market that it has built and has buyers for only half of those homes. Its line of credit has fallen from $2 million to $800,000, which it hopes to replenish after selling some of the unsold homes it has developed.

Jarosz notes the difference in how Nytes' and other local CDCs are doing it compared to the City of Fort Wayne. She writes, "Fort Wayne, for instance, lined up homebuyers for all of its houses before developers went under contract to build." "The city also covered the full cost of each project with part of its $7 million NSP grant, so developers didn't have to find money to fill the gap." This makes a lot of sense, particularly since so many of these neighborhoods like Nytes' have so many homes in foreclosure currently, including a number of new homes built with substantial government assistance in recent years in this very neighborhood. As Jarosz explained, "Initially, that means fewer renovated properties, but because the homes are built and sold more quickly, money from the sales can be recycled to do more projects, said Heather Presley, the city's director of housing and neighborhood services." "So far, the city has brought in about $1.5 million from home sales and is using it for other projects."

Jarosz says the Ballard administration is pretty much giving carte blanche to the CDCs to spend this federal money as they see fit. "So far, Indianapolis administrators have left it to developers charged with spending the NSP money to figure out their own financing to supplement it." "But they said they communicate with the developers frequently, and if they seek the city's help, the administrators work to find a solution." "It's always been our approach to brainstorm and say, 'If we can't, how can we?' " said Janna Mayes, who is on contract with the city to advise on abandoned-housing issues." Why doesn't poor oversight by the Ballard administration surprise me? I particularly found this comment on the Star's website interesting:

IF you think something smells bad, you are right.


Follow the money. Find out who is buying these dumps for very little and then selling them for big bucks to the "development companies". Without the smoke and mirrors, much more could be done with this money. TOO MANY people are taking advantage of the programs and turning them into personal profit.

The government spending is killing the taxpayers.

Maybe someone should take a closer look at the chain of title on some of these properties. Back when the Peterson administration spear-headed the Fall Creek project using a lot of federal dollars, bond and TIF monies to help initiate the building in that area, a single investor owned the vast majority of the lots the City purchased for new construction. Some people wondered how that single investor seemed to know that buying up all those lots for pennies in what was known as Dodge City would turn out to be such a lucrative investment after he later sold them to the City for a handsome profit.
Posted by Gary R. Welsh at 7:31 PM

Incidentally, $90K for that property iw WAY high. I don't know what's up with that, where that figure came from.

The property appears to be owned by:

I would expect the structure is pretty well bombed out and stripped of copper and furnace - probably plumbing fixtures, too.

If the city is paying someone $90,000 for this property, the transaction is highly suspicious to me. And if I understand the story right, there's another $60,000 that they plan to dump into the same property?

This is a huge scam and the parties involved need to be exposed.

Did I miss something? Who is the "single investor" that made out so well selling his Dodge City properties?

Keep digging on Mapleton Fall Creek CDC wasting dollars. You will be shocked.

There are some people in the city trying to expose the waste - the overpayments and moronic policies. But there is an existing cabal, that is only interested in maintaining power by doling out money.