Should Straub Be Fired? 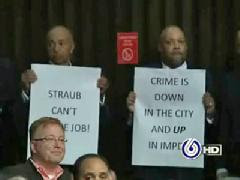 A group of black ministers packed last night's City-County Council meeting to demand the firing of Public Safety Director Frank "I'm the police chief" Straub. The group is particularly upset that some high-ranking officers are being scape-goated for the mistakes that occurred in the investigation of Officer David Bisard after his police cruiser struck two motorcyclists, killing one and seriously injuring two others. Darryl Pierce and Ron Hicks, the number two and number three persons at IMPD, were demoted last weekend to the rank of lieutenants within the department in an effort to calm growing public anger over the handling of the case. Both were dispatched to the accident scene while IMPD Chief Paul Ciesielski met with Straub to discuss more pressing issues in Straub's office. Lt. George Crooks, who headed up the department's fatal alcohol crash team (FACT), was removed from his job even though he wasn't even at the accident scene. A Lawrence police department officer, Lt. Stan Stephens, a member of FACT, actually accompanied Bisard to the Methodist Hospital Occupational Clinic where his blood was drawn for testing. Stephens took more than an hour to deliver Bisard's blood sample for testing after it was drawn. According to WRTV, Stephens had lunch and visited with a friend before delivering the blood sample to the police property control room. The blood alcohol test showed Bisard to be intoxicated at a 0.19 level, more than double the legal limit. Prosecutors threw out the test results and dropped alcohol-related charges against Bisard after it was determined the blood had not been drawn by a person qualified under Indiana law to draw blood for such purposes. Bisard still faces several serious criminal charges, including reckless homicide.
Posted by Gary R. Welsh at 7:09 AM

I'm not so sure, Gary. Straub seems to be the one shaking up and closing down the IMPD cover-up practices.

A lot of these problems are being aired since Straub got here, problems that would have been buried under Newman.

Now I hear that the Mayor is canceling the take-home cars. I'm sure Straub had a hand in that much-needed change.

Straub is certainly shaking things up. Take a look at all the extra hires of do-nothing political hacks within his own department paid high salaries and some of his other questionable expenditure of taxpayer resources since taking over the department. I continue to maintain that this department is a complete waste of taxpayer funds. Police and fire should report directly to the mayor. Hire an independent investigator to handle investigations of police and firefighters if you want to shake things up. It would cost a whole lot less than the bloated bureaucracy Straub is building for himself within his department.

Well, obviously, I don't support do-nothing hires. I'm simply comparing Straub's discipline of IMPD to the nonexistent oversight that occurred before he got here.

It's good to see IMPD is no longer an unaccountable street gang.

It really depends on what side of the isle you are on. If you are a Democrat you want him to stay and keep making a fool of the Mayor.

If you are a Rebublican you want him gone so that he does not bring down the Mayor.

Either way we are screwed

I concur that without Straub we wouldn't presently have much of a detached eye. Without the independent outsider aspect, I'd guess gov't bureaucracies have a zero chance of change versus a slim one.

But, given we're fiscally busted, it's hard to justify the position, let alone additional staffing if you can do it by "hired gun". Like other cumulative failings of gov't from oil drilling inspection to making sure eggs don't have salmonella- can we put money into paid third-party testing/checking/auditing instead of cushy intra-gov't "inspectors"?

We saw what a terrific job they did keeping Wall Street & banking in their box before the Great Recession (granted- gov't has to spot-check the third parties).

Since coming to Indy, Straub has believed he is the police chief, disregarding the City Code that denies him operational control. Straub has created many make-work jobs that never before existed because they were not needed. He ordered patronage hire-ons to appease the black ministers. Every action Straub does appears to be political/patronizing to a group of loud-mouths.

Now just why did Straub need to remodel a suite of offices for himself at a huge cost?

Why is Straub trying to move/sell fire headquarters?

Why is he not hiring police?

This guy is a bottomless pit of senseless spending.

Leaders do the right thing for the right reason. Straub just does the political thing for the wrong reason, thinking he'll appease a squeaky wheel....when all he does is let everyone see how weak he is.

Straub is responsible for the problems he brought on. He replaced the high ranking police officers only for appearance sake; there was no reason. Those leaders (who are probably respected by their officers) were not demoted for cause. Just what expectation did they fail? -They did what they were supposed to do. Straub just threw them under the bus.

No here's a thought: Straub has been messing with the police department and micromanaging it since he got here and problems from a lack of consistency and failure to allow leaders to achieve goals have arisen. So now he wants to change them again. Why? Straubs actions are the cause of a lot of problems, and I wouldn't be surprised if there weren't a strong morale problem with the members of the police department. I did read that they rejected what they called a fair contract only because of Straub micromanaging/screwing things up.

Why has the police department been his exclusive toy? Why is he on the camera so much? -I don't recall ever seeing a public safety director who is such a media whore. I read that he blacked out the police/fire public affairs offices.

The public safety director job is mostly a financial/budget person, NOT a police chief. If the mayor won't fix his problem, perhaps the council needs to remind him that they codified his authority and denied him operational control of the police.

Indy, I agree wiht you and most of the people here. My concern is that the Moral on the IMPD is getting very low. When you have no respect for your boss, things go down hill fast. None of the cops that I know can stand the man. He has the tackt of a drunken walrus and the political awarness of a blind man.

Basicly he has brought his New York attitude to Indy and I dont like it. If the Mayor keeps him around it will cost him the election. Straub is a political liability and a jerk.

It was his memto to all of the IMPD staff that no one can talk to the mayor wiht out Straubs permission. NO ONE.

Now they cannot take home their cars? I like a cop car on the streets ,even if it is going to the store.

The Mayor has lost my vote and others. His value to this city is going down faster than Brizzis morals at a Tim Durham party

Now Straub has had the frosted covering placed on his office windows so that no one can see what is going on............so much for transparency....literally!!!

Look at the cops vote with our wallets.

What does "vote with our wallets" mean?

Is that a reference to the token minority civilian hire-ons orderd by Frank Straub, PhD.?

Is that a reference to the largess suite that Frank Straub, PhD. ordered built for His Emenince?

Is that a reference that we don't have enough police and he's expanding his unneeded patronage staff with big fat salaries at our expense?