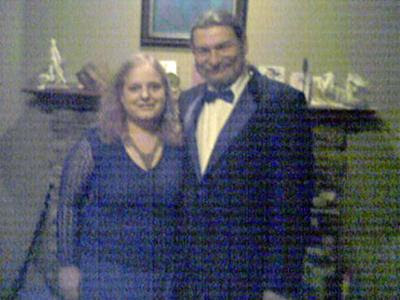 The Indianapolis law firm of Barnes & Thornburg became the center of tragedy today after a man dramatically shot and killed himself on the rooftop garage next to the firm at 11 S. Meridian and plunged to his death on the sidewalk along South Meridian Street. Police have since learned the man, Dave Frisby, had earlier strangled to death his wife, Mary Jane Frisby (shown above with her husband), in their Brownsburg home. According to WRTV, Frisby and his wife were going through a divorce. After killing his wife, Frisby then drove to the rooftop of the garage adjacent to Barnes & Thornburg's downtown offices where his wife was employed as an attorney. Armed with two handguns, Frisby fired several shots in the direction of the law firm before turning one of the guns on himself. WRTV describes the shooting and the suicide message Frisby left on his Facebook site condemning a culture of moral corruption at the law firm:

Witnesses told police they saw the man fire two to three shots toward a nearby building that houses the Barnes and Thornburg law firm, where Mary Jane Frisby was a partner.


"He turned and it's like he looked directly at us and fired two shots," said Anthony Prather, a lawyer who was in the office at the time.

On Dave Frisby's Facebook page, he posted a message, apparently shortly before killing himself, condemning the law firm.

"The bad lawyers at the Barnes and Thornburg law firm ... do not respect the institution of marriage and corrupted my wife Mary Jane (sex and drugs). Someone (maybe one of their good lawyers) please make them pay. Justice demands the truth out. It's a tragedy."


Fribsy, who was armed with two handguns, was pronounced dead at the scene, police said. There were no other reports of injuries. Frisby is shown at left just moments before turning the gun on himself.