Did Sheriff Bud Gray Have A Gambling Addiction? 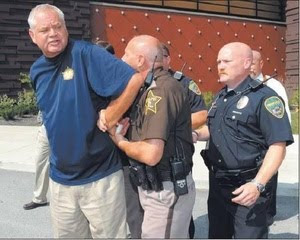 When the Hancock County Coroner carried out the arrest of Sheriff Calvin "Bud" Gray last Friday afternoon, Gray was located at the Indiana Live Casino in Shelbyville. Gray is accused of stealing more than $4,000 from the sheriff's commissary fund and obstructing efforts to investigate the crime he is accused of committing. His charges include theft, official misconduct and obstruction of justice. News reports indicated Gray had incurred personal financial difficulties as of late. Those same news reports expressed shock from many local residents of the criminal charges brought against him. One has to wonder if he had a gambling addiction given that he was found at a casino when he was arrested. It also raises a bigger question of the toll Indiana's expansive gambling industry is having on our state. It seems like every time you turn around someone is accused of stealing money from their employer, charitable group or even the government to feed their gambling addiction.

UPDATE: Sheriff Gray was released late this afternoon from the jail in Hamilton County where he was being held due to concerns for his well-being if he was jailed in Hancock County after Gray waived his right to an initial hearing. He is currently formally charged with obstruction of justice charges only. Dan Sigler of Whitley County will serve as special prosecutor in the case and determine if charges of theft and official misconduct are warranted in the case. He is highly respected and acted as the special prosecutor in the campaign finance violation against unsuccessful Ft. Wayne mayoral candidate Matt Kelty, which he successfully prosecuted. Gray will resume his duties as sheriff until the case is resolved. WTHR says police officers indicated Gray appeared intoxicated when he was arrested on Friday. Gray believes he will ultimately be proven innocent of the charges according to WTHR.

Fraud happens across the board in all areas of government, Hartman said, although he didn't speak to specifics in Gray's case because he hasn't investigated it.


"People find themselves in situations -- a financial or medical situation, alcoholic or drug problems, gambling addictions," Hartman said. "They need money, and unfortunately are in a position that they have their hands on money and can take it."

Gray has been struggling to keep personal finances in order, and bill collectors had moved to repossess a truck Gray owned and had fallen behind in paying off, Dobbins said last week. Officials said there is no evidence that Gray has a gambling problem, despite the fact that he was taken into custody at a casino.

Hartman said that a visit to the casino does not necessarily scream foul play but could be a red flag in some cases.

"When you hear rumors of public officials who like to spend a lot of time at casinos, that's one of the red flags," Hartman said. "Does that mean something? Not necessarily. But maybe there are some issues."

Me = Wondering how that investigation into the spending of commissary funds by Marion County Sheriff (and State Senate candidate) Frank Anderson (D) is coming along....

It looks like they had a resister, doesn't it?