Are The Colts Competing With Pacers For Bad Boy Image? 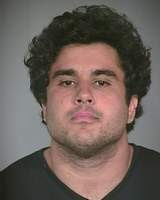 Twenty-three-year old Colts defensive lineman John Gill decided to have a little fun during a one-day break in pre-season training. Indianapolis police found him passed out in a ditch off of Lafayette Road on the City's northwestside early this morning. Police charged Gill with public intoxication. WTHR says Gill, who was without a car at the time, was found soiled and disheveled and was not wearing any shoes when they found him in the ditch. It was unclear how Gill wound up in the ditch. Gill's team number is 69. It seems criminal arrests for Colts players are becoming a pretty regular occurrence these days, or perhaps they just don't have a chief of police on the team payroll to protect them from being arrested. One must wonder if the Colts players are aiming to earn as bad a reputation as their NBA counterparts playing for the Pacers deservedly earned.

UPDATE: It looks like I spoke to soon. The chargs against Gill have been dropped. Read about here. I guess things haven't really changed.

UPDATE II: It doesn't look like Gill will playing for the Colts any time soon. WTHR says the Colts have sent him to rehab to deal with alcoholism.

UPDATE III: WTHR confirms Gill was arrested last September for public intoxication without describing the circumstances of that arrest. The prosecutor's office claims it had no knowledge Gill was a Colts player at the time it made its decision not to charge him, and that it typically does not charge individuals like Gill without prior criminal records. I'm not sure how that corresponds to WTHR's report on the arrest just last September, which I'm assuming also did not result in criminal charges.
Posted by Gary R. Welsh at 4:47 PM

I recommend Matt Taibbi's "Jock's Guide to Getting Busted."

"In terms of jock crime sprees, no other stretch rivals late June and July. Why? For one thing both the NHL and NBA seasons have come to an end, unleashing on places like Vegas, Atlanta, and Miami a torrent of millionaire Slavic and Scandinavian power drinkers and seven-foot NBA jism-spewing machines, all with eight months of rigorous dieting and physical training to undo.

Plus, there’s this: Every year the NFL welcomes about 300 rookies into the league, and it’s during the midsummer months that most of them are introduced to gobs of money and near-total freedom for the first time in their lives. No more agents, coaches, and parents following them around all day, no more classes — just a brand-new apartment in an alien city, unlimited sexual opportunities, and 24 long hours in each and every day. At least until camp begins."

Gary, will Brizzi be able to prosecute this case or do you think he'll hand it over to a special prosecutor?

While I am not familiar with ethics laws, I personally believe there could be a conflict of interest because both Brizzi and Colts player Peyton Manning are investors in Harry and Izzy's.

If I recall correctly, you've previously criticized Brizzi for cutting lenient deals with those in the sports industry when they're facing criminal charges.

I must have missed something....I am unaware of any other Colts arrests lately. Can you bring me up to date? They usually are a pretty decent group especially compared to the thug machine known as the Pacers.

I don't think the connection to Peyton is strong enough to warrant a recusal by Brizzi, unless there are other facts unknown to me.

Well, they may not have a chief of police on their team anymore, but they obviously have SOMEONE!

The prosecutor's office is telling people it is not uncommon to release people arrested for public intoxication to have no charges ultimately filed against them. I'm not a criminal defense lawyer so I don't know what is common practice here in Marion County.