Decision Day For Blagojevich: GUILTY ON ONLY ONE COUNT! 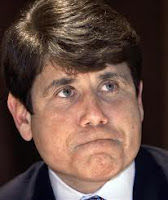 It's decision day for the twelve-person federal jury deliberating the fate of former Illinois Gov. Rod Blagojevich and his brother, Robert, in a federal public corruption trial in Chicago. Jurors have signaled to the Judge Zagel they have reached a split verdict after 14 days of deliberating, and they are now completing the final jury verdict forms. The Chicago Tribune's Eric Zorn twitters that a note to the judge indicates some convictions against one or both of the defendants. He thinks the jury is hung on at least 11 of the 24 counts. We'll soon see. Developing . . .

UPDATE: All parties have now gathered in the courtroom for the reading of the verdict as of 4:00 p.m. CST. U.S. Attorney Patrick Fitzgerald has joined his federal prosecutor team in the courtroom.

UPDATE II: Blagojevich has been found guility on Count 24 of the indictment for lying to federal investigators only . The jury could not reach a verdict on 23 other counts according to a live feed from WGN. Judge Zagel is declaring a mistrial on all of the other counts on which the jury could not reach a unanimous verdict. This is a big blow to the government's case against the former governor. Federal prosecutors immediately told Judge Zagel they intend to retry Blagojevich and his brother on the remaining counts.

Check out this video below. Blagojevich's attorney, Sam Adam, Sr., goes off on Patrick Fitzgerald calling him "nuts."


UPDATE III: The government can take some solace in news reports today that all jurors with the exception of one agreed Blagojevich was guilty of trying to sell Obama's Senate seat. It looks like the jurors are giving the government a roadmap on how to proceed in the next trial in presenting its case against the former governor. The Sun-Times gives this perspective from jurors today:

After 14 days in the jury room, the six men and six women finally acknowledged Monday they would be able to reach a unanimous verdict on only one of the 24 counts.


While some votes were split 7-5, 6-6 or 9-3, the most explosive of the charges -- that Blagojevich tried to sell Barack Obama's U.S. Senate seat -- came down to a single holdout vote, jurors said.

That one holdout -- a woman whom her colleagues declined to single out -- felt she had not gotten the "clear-cut evidence" she needed to convict, Sarnello said.

"Say it was a murder trial -- she wanted the video," Sarnello said. "She wanted to hear [Blagojevich] say, 'I'll give you this for that.' . . . For some people, it was clear. Some people heard that. But for some, it wasn't clear.''

Matsumoto said jurors were overwhelmed by the number of counts and the amount of evidence in the case. While the secret recordings were "damning," he said, it wasn't enough for all the jurors.

"The lack of a smoking gun was one of the major flaws,'' the foreman said.

Sarnello said jurors were also frustrated by a lack of order in the government's case.

"It confused some people, just the way they presented it," said Sarnello, a student from Itasca. Prosecutors "didn't really follow a timeline at all."

So in the jury room, jurors created their own timelines on large sheets of paper, charting out each of the years from 2001 to the ex-governor's 2008 arrest.

They postponed discussing a list of 11 wire fraud counts, reasoning that these charges were related to other topics they were already talking about. Instead, they focused on the most explosive Senate seat charges.

Matsumoto, a Vietnam veteran and retired videotape librarian who voted the Blagojevich brothers guilty on all counts, said by day 14, the jury was "exhausted."

"The deliberations were constant from the time we went into the jury room until [Tuesday]," Matsumoto said. "I kind of enjoyed it, the trial part. But as soon as we started deliberations, it was very troubling, and very hectic and exhausting."

That's what they got Martha Stewart on. It's the most bullcrap "crime" in history. Just remember, since you have a possibility of going to jail every time you speak to a federal agent, DON'T! Never, ever, talk to one of them. Assert a Fifth Amendment right to be silent around them, and tell them to buzz off.

In order to protect Obama, the government refused to put on key witnesses like Tony Rezko and Stuart Levine, who were parties to the conspiracy and have already been convicted of these crimes. They also didn't call any of the White House officials who participated in conversations with Blago about the Senate seat. If the government wants to win this case against Blagojevich, it's going to have to park its protection of Obama at the courthouse door and put on their strongest case.

How can you re-try someone on the same charges? Unless they bring new evidence to the table, doesn't that constitute double jeopardy?

Or can they have a new trial based on the same evidence since the jury was deadlocked?

In a criminal prosecution, if a jury is unable to reach a unanimous decision on guilt or innocence on any charge, a/k/a a hung jury, a mistrial is declared with respect to those counts and the prosecution can retry them. Double jeopardy doesn't occur unless a finding of guilt or innocence is reached by the jury.

I would add Blagojevich's attorneys can initiate an appeal on the single count on which he was found guilty in the meantime.

What a tirade from Adams about and to Fitzgerald! He is not the only one that thinks it is not Blago but Fitz who should be on trial. Good advice from Cato.

I can share Madsen's exclusive late edition, starting near the middle:

Fitzgerald succeeded in suppressing the playing of any transcripts for the jury that may have referred to the Emanuel and Obama wheeler-dealing misconduct and sexual hijinks.

Fitzgerald is the same prosecutor who brought mere obstruction, perjury, and false statements to a federal officer charges against Vice President Dick Cheney's chief of staff, I. Lewis Scooter Libby for his cover-up in the outing of CIA non-official cover officer Valerie Plame Wilson. Libby was convicted on five counts, but President George W. Bush commuted his 30 month prison sentence. There was nary a peep from Fitzgerald, who was kept on as the US Attorney in Ill. by Obama.

It is clear that the corruption of Obama, Valerie Jarrett, Rahm Emanuel, David Axelrod, and their fellow Chicago cronies was obscured by the bogus charges brought against Blagojevich and his brother in order to divert attention away from Obama and his pals. Obama's and Emanuel's life styles in Chicago and Washingtyon, DC were also moved into the ether by the focus on Blagovich, as WMR has repeatedly reported from Washington, DC and Chicago. Fitzgerald, whose own corruption,m as well as that of his prosecutors, has been described in previous WMR reports, is once again, showing his malfeasance in seeking an immediate re-trial of the Blagojevich brothers.

In the final hours of jury deliberation, jurors asked to see a transcript of a phone call of then-Deputy Governor Bradley Tusk involving a school in then Congressman Emanuel's Fifth District. The information in the call also involved Emanuel's Hollywood super-agent brother, Ari Emanuel. The Tusk-Emanuel dealings, oddly, had nothing to do with any of the criminal charges brought against Governor Blagojevich.

There is corruption in Chicago, but the jury verdict in the Blago case puts the onus squarely on the cabal of Fitzgerald, Obama, Emanuel, Jarrett, and Axelrod. Fitzgerald was briefly a part of a family tradition of serving as doormen for the wealthy residents of Manhattan's Upper East Side. Since serving as a prosecutor in New York and Chicago, Fitzgerald has served as a doormat for the same ilk that sought to bring down Blagojevich.

In 2005, sitting Republican Governor Bob Taft of Ohio pleaded no contest to state ethics violations. Taft apologized, paid a $4,000 fine, and remained in office until the end of his term. The Bush Justice Department showed no interest in trying Taft on federal charges. Yesterday, the Obama Justice Department dropped its investigation of former GOP House Majority Leader Tom DeLay, and his involvement with convicted Republican lobbyist Jack Abramoff.

Obama's Attorney General Eric Holder has apparently authorized the re-trial of Blagojevich. Obama continues to carry the water for the Republican Party he claims to oppose. But what else would one expect "Manchurian Candidate" in the White? House

The good news for the government are reports this morning that there was only one juror who held out on conviction on the other counts.