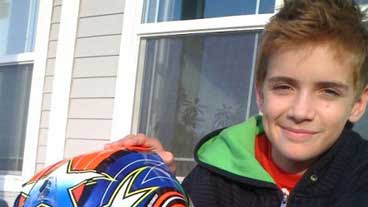 The life of 13-year-old Peter Lenz tragically came to an end today during a warm-up event for younger competitive motorcylists at today's running of the MotoGP motorcycle race at the Indianapolis Motor Speedway. Lenz was struck by another young motorcyclist after he spilled his bike in the fourth turn of the track. According to WTHR, Lenz had already won nine national championships, countless awards and more than 100 wins during his short career. His father posted the following message on Facebook after the tragic loss of his son's life:

"Peter passed away early this morning when he was apparently struck by another rider. He passed doing what he loved and had his go fast face on as he pulled onto the track. The world lost one of its brightest lights today. God Bless Peter and the other rider involved. #45 is on another road we can only hope to reach. Miss you kiddo. - Dad"

A number of riders complained after Saturday's qualifications for today's MotoGP race that track conditions were bad and led to a number of crashes. WTHR reported on the competitor's complaints:

"Seventy percent of this track needs to be resurfaced - not just that; it really needs to be ripped up, smoothed out again and resurfaced. The curves on this joint, we don't need all those draining points in there. You may as well be riding around the streets and I'm sure that except for around here a lot of streets would be a lot smoother than this joint. So it's not much of a race track," said Casey Stoner.

"The conditions of the track are quite difficult for everyone. It's so bumpy, the track, compared to a normal track, especially to the last track in Bruno. The conditions don't give you the best confidence," said Jorge Lorenzo.

Spain's Dani Pedrosa won today's MotoGP race at the Speedway. News reports indicated attendance at this year's event like other events held this year at the IMS were down considerably over previous years.
Posted by Gary R. Welsh at 8:43 PM

Strange... After the last repaving, just a couple years ago or so (I think), the drivers were lauding the smoothness of the new surface.