IMPD Officer Smashed When He Struck Motorcyclists Killing One 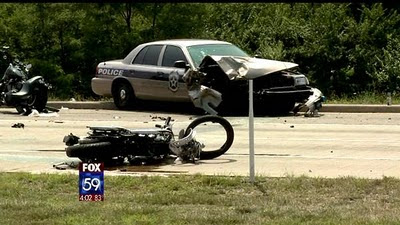 A blood alcohol test of K9 Officer Dave Bisard following an incident last Friday when his police cruiser slammed into several motorcyclists, killing one and seriously injuring two others, indicates he was extremely intoxicated. According to Fox59 News' Russ McQuaid, Bisard's blood alcohol level registered .19, well over the .08 limit. Bisard was speeding with his lights on at the time when his car collided with two motorcyclists waiting on a red light at the intersection of 56th Street and Brendon Way Drive on the City's northeast side. Although Bisard is a highly decorated police officer, he has experienced an unusually high number of crashes while driving his police cruiser according to Fox 59's Kimberly King. She detailed multiple accidents--6 in total--in which he has been involved while on duty in his police cruiser over the past several years. IMPD officers retrieved Bisard's police cruiser, his K9 partner and other items from his home following the discovery of his blood alcohol test results. Charges are expected to be filed against Bisard.

It looks like this case is going to wind up giving a big black eye to IMPD, which has already been reeling from other bad news. IMPD Chief Paul Ciecielski announced this week he will seek the termination of another police officer, Sgt. Stephen Blinn,  involved in a domestic dispute with his girlfriend during which he discharged a handgun in his police cruiser during the argument. Blinn will remain on unpaid suspension while his case is pending review by the merit board. He reportedly had an exemplary record prior to his arrest last week. Earlier this summer, Ciesielski recommended the firing of another decorated officer accused of using excessive force against a youth who was interfering with the arrest of his younger brother on home invasion charges. That case triggered racial tensions between police and the African-American community.

UPDATE: The prosecutor's office has announced it is charging Bisard with seven felony counts, including reckless homicide.
Posted by Gary R. Welsh at 9:38 PM

Since so many law enforcement officers are driving drunk, at the least, in my strong opinion, it is time to take away their right to drive the police cars when they are off duty, to take them home, so to speak. Dave Bisard, you should be mighty ashamed of yourself, driving mighty drunk while on duty, and I hope you are fired.


As for Stephen Blinn, please resign.

Now it's felony murder and a death penalty case.

This should kill the take-home car practice.

Actually, Cato, it would be Reckless Homicide.

IC 35-42-1-1
Murder
Sec. 1. A person who:
(1) knowingly or intentionally kills another human being;
(2) kills another human being while committing or attempting to commit arson, burglary, child molesting, consumer product tampering, criminal deviate conduct, kidnapping, rape, robbery, human trafficking, promotion of human trafficking, sexual trafficking of a minor, or carjacking;
(3) kills another human being while committing or attempting to commit:
(A) dealing in or manufacturing cocaine or a narcotic drug (IC 35-48-4-1);
(B) dealing in or manufacturing methamphetamine (IC 35-48-4-1.1);
(C) dealing in a schedule I, II, or III controlled substance (IC 35-48-4-2);
(D) dealing in a schedule IV controlled substance (IC 35-48-4-3); or
(E) dealing in a schedule V controlled substance; or
(4) knowingly or intentionally kills a fetus that has attained viability (as defined in IC 16-18-2-365);
commits murder, a felony.

I still want officers to take their cars home, but only if they live inside Marion County. I still believe the presence of police cars is a powerful crime deterrent.

And it won't stop the take home car policy...he's a K-9 officer, the k-9's are kept at home, so the cars are needed if an officer is on call or called out.
Question though, and I might have missed it...was he working a regular shift or was he called out to assist???

Keeping in mind the extreme deference given to "the state" (government) in nearly all matters all the way up to and including its ability to commit theft or fraud against the citizens we have to wonder if, in any of those prior accidents on Bisard's record other motorists were involved and, perhaps, found at fault when, indeed, he might have been intoxicated or otherwise acting irresponsibly.

Police say the officer was at fault in only one of those prior accidents involving his police cruiser. My understanding is he was called to assist another officer serving a warrant while on duty.

While we should be skeptical of innocense, let's not assume guilt. You should insert "if" in your comment.

The three officers mentioned all were called commendable, highly decorated, etc.
Why, all of a sudden, are these exemplary officers having problems?
Is it something the city is doing to them? Is extreme pressure causing it? Is it working conditions, politics, lack of support?

I wonder if he was off duty and drove from Noblesville in that condition, or was drinking on the job? It will be interesting to learn where he was prior to the run.

On IndyStar someone raised the question of why it took two hours to do a blood draw and whether a defense of 'I was so shook I went for a few drinks' may be attempted.

I hope either that is true or he never left the scene while the accident was being investigated - they were out there for quite some time - except to be transported to the testing clinic.

If some finagling was done to delay the blood draw then that needs to be dealt with, too. Being drunk at the time and having someone arrange a 'way out' would be as despicable as being drunk on duty.

Of course, Paul is right. I should have inserted, "if you were" before the word "driving". I am presently experiencing trouble due to the proven ineptitude of a police officer assigned to my neighborhood.

Also, we have the right to expect that government workers allowed to drive government cars on personal business, NOT be allowed to use them to commit adultery or most other acts society considers vices.