Chicago Tribune Has Lost Its Way 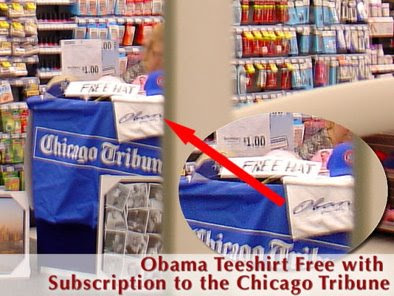 Totally devoid of any journalistic integrity, the Chicago Tribune is hocking Obama teeshirts for subscriptions to the struggling newspaper. This comes as no surprise. The newspaper was instrumental in serving as a tool of Obama's U.S. Senate campaign in 2004, digging up dirt on his chief rivals in both the Democratic primary and the general election to sink their candidacies. The newspaper has always gone soft in its coverage of Obama, ignoring his ties to terrorist William Ayers, extremist religious leaders like Rev. Jeremiah Wright and Louis Farrakhan and corrupt influence peddlers like Tony Rezko. Obama's media guru, David Axelrod, is a former political writer and City Hall bureau chief for the newspaper, with close ties to Mayor Richard Daley. The Tribune's parent company, which also owns the LA Times, is facing default on billions of dollars in loans due to declining advertising revenue and fewer subscribers. Col. Robert McCormick, the conservative Republican who once owned the Tribune and turned it into one of the nation's largest newspapers, is rolling over in his grave at what has become of his old newspaper.
Posted by Gary R. Welsh at 5:39 PM

Well I tend to agree with you on the t-shirt giveaway. Seems like our media outlets should not be tied to candidates or party affiliations but they all seem to be in today's age.

Now let me propose a question. If those folks you listed all have some kind of influence on Senator Obama would not his working relationship with Senator Lugar also be an influence? And a good one from your view?

It would be a pretty lonely world if everyone that has any political aspirations had to start vetting all their friends from high school forward don't you think?

Anyway your blog is awesome and I enjoy reading it.