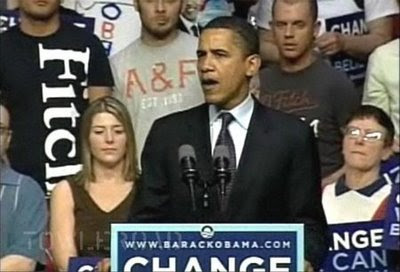 Apparently, when it comes to staging public events, Sen. Barack Obama's campaign is hip to young men standing behind him sporting Abercrombie & Fitch wear (as shown in the photo above from an event in Evansville, Indiana in April), but Muslim women in headscarves are persona non grata. When two Muslim women wearing traditional headscarves attempted to stand behind Sen. Barack Obama during a recent event in Detroit, Obama campaign staffers recalled the two women, Hebba Aref and Shimaa Abdelfadeel. The Politico's Ben Smith explains:

That incident began when the volunteer asked Aref’s friend Ali Koussan and two others, Aref’s brother Sharif and another young lawyer, Brandon Edward Miller, whether they would like to sit behind the stage. The three young men said they would but mentioned they were with friends.

The men said the volunteer, a 20-something African-American woman in a green shirt, asked if their friends looked and were dressed like the young men, who were all light-skinned and wearing suits.

Miller said yes but mentioned that one of their friends was wearing a headscarf with her suit. The volunteer “explained to me that because of the political climate and what’s going on in the world and what’s going on with Muslim Americans, it’s not good for [Aref] to be seen on TV or associated with Obama,” said Koussan, a law student at Wayne State University.

Both Koussan and Miller said they specifically recalled the volunteer citing the “political climate” in telling them they couldn’t sit behind Obama.

“I was like, ‘You’ve got to be kidding me. Are you serious?’” Koussan recalled.

The reaction to Smith's story from the Obama campaign is predictable:

“This is of course not the policy of the campaign. It is offensive and counter to Obama’s commitment to bring Americans together and simply not the kind of campaign we run,” said Obama spokesman Bill Burton. “We sincerely apologize for the behavior of these volunteers.”

One of the young men from the photo above later boasted on a gay blog about how Obama campaign staffers singled he and his friends out for their prime placement behind the candidate. I thought their placement behind the candidate a little odd at the time, given the extent to which they were so prominently advertising a clothing store accused in the past of racism and sexism. Ms. Aref felt differently based on her experience. “I was coming to support him, and I felt like I was discriminated against by the very person who was supposed to be bringing this change, who I could really relate to,” said Hebba Aref, a 25-year-old lawyer who lives in the Detroit suburb of Bloomfield Hills. “The message that I thought was delivered to us was that they do not want him associated with Muslims or Muslim supporters.”
Posted by Gary R. Welsh at 9:09 PM

Once again, there is an attempt to make this into something big when there is nothing. A volunteer made a mistake in judgement. The campaign has apologized and supplied photos of many rallies where Muslim women were seated close to the Obama. In the meantime, the families of the women involved have informed the media that they still intend to vote for Obama. You can rest assured that no other volunteer will make this error. CASE CLOSED.

Your reaction would have been quite different if the same thing had happened at a John McCain event.

Obama "recalled" Muslim women at an event for the sake of a photo op?????

Please say he not now disowning cultural aspects of his youth!

Who/what will Obama disown, hide, or denounce next?

Melyssa, A news report earlier in the campaign which has not received much attention talked about the reaction of Obama's mother and her friends to the book he had just written, Dreams of My Father. His mother's friends were livid at the enlarged role and influence in his life he credited to his father, who walked out on him at age two and never provided any support for his upbringing, compared to his mother, who raised him and made sure he got the best education possible. His mother, who was dying of cervical cancer at the time, was more circumspect. She told her friend that he's still trying to discover who he is. I think his mother was right. Oddly, I think he's still in search of himself after all these years.

Maybe the women who the volunteers booted intend to vote for BHO, but this just another of many "oops, sorry, I denounce him/her, etc" blunders to come. BHO is the wrong candidate to try to win back the oval office. Tragic that DNC rules are twisted, caucus states apparently count more than votes, delegates & supers get to flip-flop, and democracy gets crapped on. I have never in my 24 years of voting been so apathetic about this contest. I honestly feel that if BHO wins, he'll do more damage and insure that a Dem will never be in office again. Take a look back in Chicago at how this guy got into politics in the first place...disgusting.