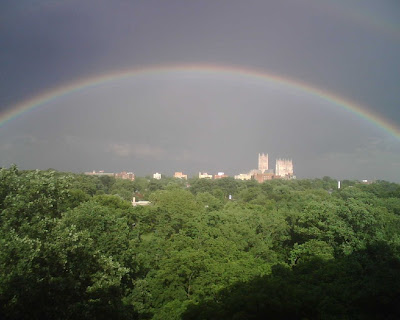 "Surreal' is how one person described this scenic rainbow which appeared over D.C. just as the funeral services for Tim Russert concluded, which included a rendition of "Somewhere Over The Rainbow". In the photographer's words:

This is probably one of the most surreal experiences I have ever had in my life. 10 minutes after the memorial at the Kennedy Center ended and the acoustic version of "Somewhere Over the Rainbow" came on as people were leaving, I heard people outside of my apartment in DC on their balconies. I ran out to discover this full rainbow over the National Cathedral! It had to have covered the entire city of DC. There is no doubt in my mind that it was from Tim Russert himself. The weird thing is it didn't rain all day and then it rained for about 3 minutes after the memorial ended only to stop and create this beautiful scene. I want NBC to share this with EVERYONE!

Thank you for posting this.

Very nice, thanks for sharing Gary.

I was able to get a pic from my window of the double rainbow: www.dcfred.blogspot.com

Thank you for sharing photo.

Thank you so much, means a lot.

and they want to take IN GOD WE TRUST OFF OF OUR MONEY!!HA!

The music played before and aftr the service was from Russert's ipod.
The mourner had gone to the Kennedy Center's roof terrace for a recetion, and all were able to see the DOUBLR rainbow from there.
It was incredible.

What a great picture and story. Thanks so much for sharing.