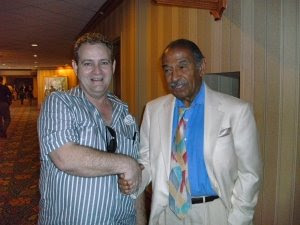 The New Republic has a great run-down of the circus-like atmosphere outside of the DNC Rules & Bylaws Committee meeting in D.C. yesterday where a lively protest was being carried on by Clinton supporters and Obama antagonists yesterday to decide the fate of the Florida and Michigan delegates. According to the report, Larry Sinclair, the man who claims he did cocaine and had oral sex with Obama in the back of limousine in Chicago in 1999, was the belle of the ball. And yes, that is a photo of Rep. John Conyers (D-MI) with Larry Sinclair. I'm sure Conyers had no idea who Sinclair was when he took that photo. Eve Fairbanks of the New Republic reports:

Howard Dean may hope that the "healing will begin today," but two blocks away from the northwest Washington Marriott where the DNC's Rules and Bylaws Committee is meeting right now to try to figure out Florida and Michigan, the Hillary protesters are occupying an utterly alternate (and healing-free) universe: a universe in which one of the big lawn rally's speakers yells that the Democratic Party no longer is in the business of "promoting equality and fairness for all"; in which a Hillary supporter with two poodles shouts, "Howard Dean is a leftist freak!"; in which a man exhibits a sign that reads "At least slaves were counted as 3/5ths a Citizen" and shows Dean whipping handcuffed people; and in which Larry Sinclair, the Minnesota man who took to YouTube to allege that Barack Obama had oral sex with him in the back of a limousine in 1999, is one of the belles of the ball.

"They almost made me cry this morning when they told me to get out of there," the blond Sinclair--who's looking roly-poly and giddy in a blue-and-white striped shirt with a pack of Marlboros protruding from the breast pocket--says, referring to several nervous protest organizers who tried to evict him when he first showed up at the rally site early this morning carrying a box of "Obama's DIRTY LITTLE SECRETS: Murder, Drugs, Gay Sex" fliers. Since then, though, he goes on, "I have been totally surprised by the reception I have received!"

He's not kidding. Clusters of people in Hillary shirts ask to take their photo with him, one woman covered in Clinton buttons introduces him to Greta Van Susteren, and he estimates he has handed out 500 fliers. "You could improve your credibility if you downplayed the gay sex and focused on the drugs," sagely advises one Hillary supporter with auburn hair and elegant makeup. But in this universe, Sinclair's credibility doesn't seem to be suffering too much. In fact, he's treated nearly as well as he might be at a meeting of the Vast Right-wing Conspiracy. In the thirty minutes I stand with him, only one woman expresses disgust at his fliers and his willingness to chattily discourse on whether Obama is "good in bed."

Earlier, he claims, he even got to take a picture with Charlie Rangel. "I love him!" Sinclair chirps, though, it must be said, not as much as he loves Lanny Davis.

Has it come to this? We tend to assume the Hillary camp's hot rhetoric--that Obama's less ready than McCain to be commander-in-chief, that the DNC in Florida is like Mugabe in Zimbabwe--is studied, purposeful, that they can't really believe it. That may be true at the Lanny Davis level, but by the time it trickles down to Hillary's most grassroots supporters, it becomes deadly serious.

Of the eight Hillary supporters I quiz at the protest (six of them women), only one says she'd even consider voting for Obama in the fall. "It's sad. I'm a lifelong Democrat and the party's been taken over by these Obama people who say they want 'change,'" gripes Linda of Horseheads, New York, outside the Marriott as a honking car decorated with a painting of Hillary, a glued-on bust of Cleopatra, and a tampon drives by. Linda, she says, has already gone to the state Board of Elections to learn how to write Hillary's name in in November. "So much has been stolen from her."

Justine, a self-described "diehard Democrat" from Greensboro, North Carolina, objects to the write-in idea. "It's gonna help Barack if you don't vote against him," she says. She and her friends got Sinclair to autograph their copies of the "Murder, Drugs, Gay Sex" flier. One of those friends, Jeannie, is living proof that, at least for some people, the long primary has done its damage. "When [Obama] first came out, we just thought he was too young," she explains. "But now I don't think he's qualified at all."

It's easy to sink into despair here. Standing and watching all these Democrats chat up Sinclair--who's retained Montgomery Blair Sibley as his lawyer and says the Republican National Committee has also been in touch with him--makes me want to fall to my knees, rend my garments, and start insanely screaming, "Wake up! Wake up! You'll hate a President John McCain!" But the rhetoric from the top has imparted its poison below, and the bitterest criticisms of Obama gain traction as they circulate through the virulently-pro-Hillary echo chamber. "Would you rather have a president who had an affair [Bill Clinton] or one who was a murderer [Obama]?" Jeannie, the Greensboro Democrat, asks a fellow in a floppy Tilley hat and Hillary buttons. "That's a good point," he replies.

Following instructions from Obama HQ, almost no Obama supporters have shown up to protest, amplifying the impression of the alternate Hillary universe. But around the edges, a few small signs of the other universe peek through, the one in which Barack Obama leads and most Democrats don't suspect him of multiple felonies. Inside the Marriott's gift shop, the sales clerk tells me that Democratic bumper stickers have been selling like crazy today. "Mostly Hillary?" I ask.

Not another Larry Sinclair article........is this going on until November....do you ever discuss issues

You only wish he would just go away.

uuhh, tarrandwooley, I'm quoting from the New Republic. I believe that is a reliable news source.

As I said before, if there was one iota of truth in this gossip piece, the Clinton campaign would have been all over it. They didnt touch it either.........how about an article on Cindy McCain and her illegal corporate campaign contributions to her husband's campaign. That is something that is available in print.

God bless Larry Sinclair! I hope he does not go away anytime soon. He might single-handedly bring down Obama.
--Melyssa

Wilson,...I mean "Art", if you recall Ballard didn't touch any of the hit pieces the activists put out in the media on Bart Peterson either. Yet, the information was true and ultimately caused Bart's defeat.

Sometimes it make sense for a candidate to keep their hands clean and pristine and let their supporters do the dirty work of exposing the lies, hypocrisy and immorality of the competition. --Melyssa