Bernie Really Needed This One 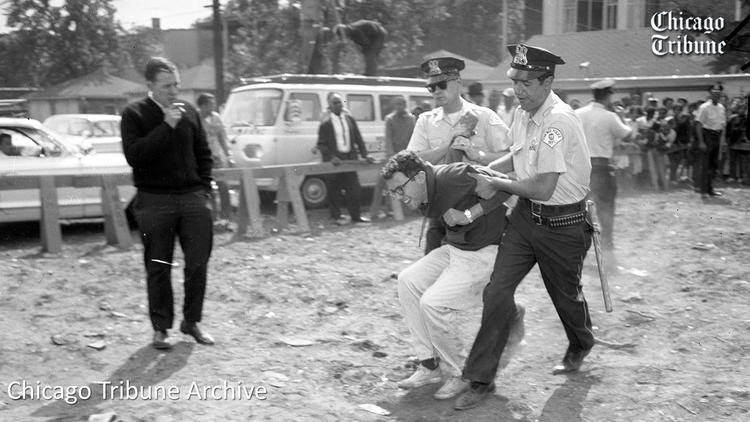 How often in American politics does a politician want for there to be just one photo of him from the 1960s getting arrested?  Bernie Sanders got his wish. The Chicago Tribune searched its archives and finally found that one photo Sanders needed to prove his street cred as a true civil rights warrior of the 1960s while a student on the University of Chicago campus. Sanders has been struggling to gain traction among black voters who doubt his sincerity to their cause. Now he has it.


The black-and-white photo shows a 21-year-old Sanders, then a University of Chicago student, being taken by Chicago police toward a police wagon. An acetate negative of the photo was found in the Tribune's archives, said Marianne Mather, a Chicago Tribune photo editor.

"Bernie identified it himself," said Tad Devine, a senior adviser to the campaign, adding that Sanders looked at a digital image of the photo. "He looked at it — he actually has his student ID from the University of Chicago in his wallet — and he said, 'Yes, that indeed is (me).'" Sanders, a U.S. senator from Vermont, was traveling Friday near Reno, Nev., on the eve of the state's Democratic presidential caucuses . . .

Sanders was arrested Aug. 12, 1963, and charged with resisting arrest. He was found guilty and fined $25, according to a Tribune story about the protests.

Now if he can just explain to voters why it took until his 40th birthday before he found a real job he'll be ready for the White House.
Posted by Gary R. Welsh at 11:01 PM

Sanders is a part of Terrorist Bill Ayres' team. They wanted to disrupt the elections as Obama hopes to declare Martial Law after he creates civil unrest. Their goal is the same: ANARCHY!

Anon 1:07, No, he isn't. In fact, Bernie could not be more different than Obama or HRC (Or Ted Cruz or Jeb Bush or Marco Rubio for that matter) and the proof is in how the DNC and establishment interests are trying to destroy him. I am not a Socialist and will never vote for one, but there's a certain appeal to me about a guy like Bernie. He's a true believer. He's not owned by the machine. There's much to like about him. I say that as a thinking adult who is comfortable in his own skin rather than a robot who blindly adheres to dogma, like you, for example.

Photo looks staged as hell to me. That's Burny!